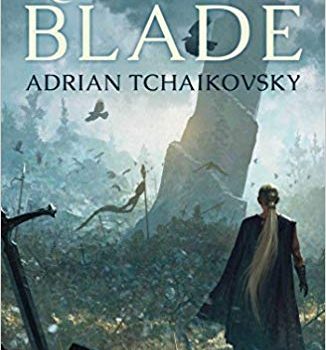 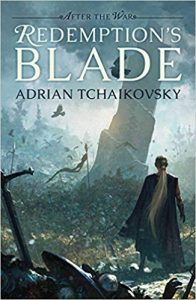 Redemption’s Blade, like Adrian Tchai­kovsky’s unrelated 2016 novella Spi­derlight, is heavily influenced by the Tolkien tradition in epic fantasy. Unlike Tolkien, though, Tchaikovsky’s work is interested in – for want of a better word – the humanity of people on both sides of a war between “light” and “darkness”: the flaws and the good points on both sides of the line. Even people who work for a good cause can be vicious or evil, and even people who serve in the ranks of an evil master can choose to do good acts, given the option. Redemption’s Blade is a novel about the aftermath of a decade-long total war against a cruel and brutal totalitarian enemy, and about trying to build some bridges in the war’s wake.

The Kinslayer came out of darkness with armies bred in the pits of the earth and twisted everything he touched, even severing the gods from the world. After ten years of war, he was finally killed. The war’s over.

Celestaine is one of the heroes that killed him. She has a magic sword that was given to her by a demigod, and with which she once killed a dragon – as well as helping to kill the Kinslayer. She’s famous. But she wants to keep being use­ful. Fighting the Kinslayer gave her purpose, and with the war over, she’s set herself a new task: to find some kind of great magic or artefact that can restore the wings of the Aethani, a race of winged people who were crippled or killed, ev­ery last one, by the Kinslayer’s forces, and who will not now be able to teach their children to fly.

She’s also travelling with a pair of Yorughan. The Yorughan were the Kinslayer’s shock troops during the war, but Heno and Nedlam made a choice to help Celestaine and her companions kill the Kinslayer. Now Celest counts Heno – a mage, despised by the Kinslayer’s line troops and their enemies alike – and Nedlam among her friends, and Heno is her lover. This compli­cates matters for Celest, because not only are her former comrades no longer united under one banner with the onset of peace, but they’re very used to seeing the Yorughan as enemies, and it’s not at all certain that they’ll be able to move past that and into a future where they can meet their former enemies as people.

There’s only one artefact that could possibly help restore the Aethani’s wings: the Kinslayer’s crown, forged from the most powerful magical items that the Kinslayer acquired over the course of his reign. Once Celest establishes that it ac­tually exists, she and her companions – joined by a prince of the Aethani, a young man who spent ten years underground as a slave in a mine – follow a convoluted trail in its pursuit, one that leads them from a Yorughan general trying to build a new nation, to one of Celest’s former comrades, a half-dead and yet apparently immortal bard; from a city run by an order of religious fanatics steeped in vengeance, to a war camp that’s just heard the last ever communi­cation from the gods was an exhortation to be kind – and is trying to work out what that means when they’re facing an enemy with which they can barely communicate.

Along the way, they’re trailed – and some­times assisted – by the artefact-collecting duo of Dr. Catt and Dr. Fisher. Catt is a fussy, self-important, well-meaning sort, obsessed with collecting magical artefacts just to have them (not to use them), and is determined to steal the Kinslayer’s crown from Celest once she’s actually managed to get her hands on it – she is a hero, after all, and far better suited to such a dangerous task than Catt himself – while Fisher is his long-suffering partner. (It’s easy to read their relationship as homoromantic, but I don’t believe the text ever confirms this one way or another.)

Eventually, Celest’s quest will lead her and her companions to an adversary they never expected, and in the confrontation, Celest has to face the real reason she set out: is she really trying to do good, or does she simply crave the accolades that come with being a “hero”?

Redemption’s Blade is structured and paced like a sword-and-sorcery romp: a series of in­cidents predicated on encountering something new, figuring out what to do about it, and either fighting or talking one’s way on to the next ob­stacle. (Often there’s a combination of both.) But its core thematic argument is a serious concern with ethics and right action, with fair dealing and making peace across chasms that seem at times unbridgeable. At its heart, it’s kind – it’s about making flawed choices, or learning to regret terrible ones, and about valuing small acts that make a difference.

It doesn’t hurt that its characterisation is top notch: Celest is a very believable war veteran, someone who’s lost a lot (but hasn’t lost her sense of humour) and who finds herself at a loss for purpose without a war to fight. The humanity and personhood of the secondary characters stand out, and the dialogue and pac­ing are excellent. And Tchaikovsky brings his expertise (and clear love of spiders) to the fore again in several key scenes.

Redemption’s Blade is part of a shared world experiment from Solaris. The next book in this setting, Salvation’s Fire, will be written by Justina Robson, featuring entirely different characters. Word from the publisher is that they’re in talks with more authors to write more novels in the same setting. I hope Tchaikovsky has a chance to return to this setting and these characters, because I really enjoyed Redemp­tion’s Fire, and I’d like to see more.