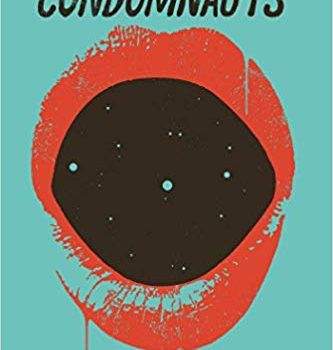 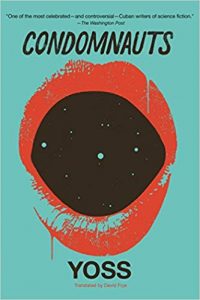 The instant I saw the cover of Yoss’s Condom­nauts on Twitter I knew I was going to read it. Cherry red lips caught in a moment of ecstasy; the teeth and tongue replaced by a starfield. It’s a cover, matched with a lurid title, that promises alien sex, not a subgenre I generally gravitate toward – aside from the astonishing “Spar” by Kij Johnson – and yet I wanted to know if the prose matched the striking package. I’m pleased to say it does, but in ways that I wasn’t expecting.

“Condomnaut” is the nickname given to the Contact Specialist, the crewmember of a star­ship who has the responsibility of establishing first contact with an alien. Based on the theory that different species from radically different environments and cultures are more likely to get along if they get naked, the Contact Special­ist is required to have sexual intercourse when they first encounter or, subsequently, trade with an alien race. It’s a beautiful idea, the first of many introduced by Yoss’s protagonist Josué Valdés. He’s a seasoned Condomnaut who has journeyed from the slums of Cuba, where he raced cockroaches for money, to the vast reaches of space where he makes love with multi-limbed arachnoids or a telepathic life-form with an elas­tic cell-structure that adopts the shape of Evita, Josué’s childhood crush.

While the novel is immediately engaging, as Josué has a conversational, street-smart attitude, Yoss front-ends the exposition and back-ends the plot. First contact with the “Evita Entity” takes up a third of the novel, not because Josué provides raunchy details of the sex, but because he’s driven to explain how he came to be so far from home, terrified, intrigued, and aroused. He begins by introducing us to the hyperjump engine, a technology that allows spacecraft to break the light speed barrier and almost instantly travel the immense distances between stars. Humanity didn’t invent the jump engine; rather when famed Catalan astronaut Joaquim Molá encountered the acquisitive, curious Qhigarians in the Oort Cloud, they handed him 25 units “in exchange for nothing more than his cat and a Catalan-Spanish-English dictionary.” This, humanity’s first meeting with an alien race, ac­quainted Molá with the ground rules for future negotiations with other species. And thus the Condomnauts were born.

When Josué eventually makes love to the Evita Entity, they link telepathically, and it’s here we find out about his difficult childhood in Cuba’s Rubble City. It’s an unexpected shift in tone as Josué’s friendly, laid back, informative observa­tions and his descriptions of a strange, vibrant, colourful, galactic community are replaced by a darker, grittier reality. We learn how Josué barely survived his childhood in a city with the “high­est background radioactivity level anywhere on [an] already polluted Earth.” While Josué’s backstory is intense, a tale of children living in hellish conditions, it’s not gratuitous or out of tune with the overall subject matter and flavour of the novel.

As I’ve mentioned, it’s in the second half of Condomnauts that the plot kicks into gear. A galactic-wide conspiracy is discovered – which I won’t spoil – that leads to a last-gasp race to save humans and aliens alike from a dismal fate. Given it’s such a short novel and Yoss leaves himself with a vast mountain of story to climb, the ending should be a mess, and yet all that expository detail from the front half of the book pays off in a climax that a well-trained Condomnaut would be proud of.

What I loved about Condomnauts isn’t just its unusual structure or how Yoss (mostly) avoids the obvious smutty gags, it’s how he makes this a story about the marginalised. Those earlier scenes detailing Josué’s nightmarish upbring­ing tie into the book’s overall discussion about those who exist outside the mainstream, whether it’s because of their colour, their class, or their sexuality, and who find themselves, due to a strange set of circumstances, empowered to act. Josué passionately summarises this remarkable shift in status about halfway through the novel:

People who had for countless centuries been shamefully rejected as perverts or sexual devi­ants. Gays, bisexuals, masochists, sadists and fetishists, the odd and the aberrational, the more or less satisfied victims of unspeakable paraphilias, we who had once been confined to madhouses or jails, or even executed to keep the moral cancer that infected us from contaminating the horrified “sexually healthy” members of society. […] Practically overnight, we, the same black sheep that the community had refused for millennia to consider members with full rights, had become important, es­sential, indispensable. The prosperity of the entire human race depended in large measure not only on our negotiating skill but, even more importantly, on what society used to consider sexual deviancy and sin. 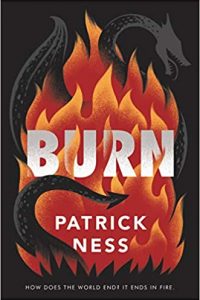