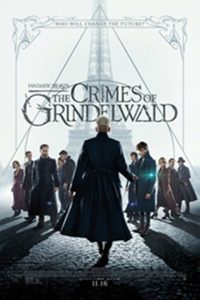 We usually start these reviews with a summary, trying to give a sense of what the movie is about without spoiling any important moments. Spoiler: the storyline is too boring to be relayed. The plot is haphazard and unnecessarily convoluted. An honest synopsis would go something like, “random events strung together vaguely trying to look serious just so new magical effects can happen, plus a handful of magical creatures, often unrelated to anything.”

Josh: How many plotlines are in this movie? Seven? I lost count. Way too many, and in the end they have to get tied up in a knot.

Arley: This is what happens when you fire your critique group and no one honestly edits you.

After the movie, we had to look up the synopsis to shake off the confusing effect of a long, overdrawn narrative. The term “narrative” is used here with hesitation. The official Fantastic Beasts site lists this as the second of five films set in J.K. Rowling’s Wizarding WorldTM.

On a superficial level, the story is: prior to World War II, Gellert Grindelwald (Johnny Depp) wants to enlist a cadre of pure-blood wizards to rule over all non-magical beings. He escapes the imprisonment of MACUSA (the Magical Congress of the United States of America) and wants to gather followers, including returning MacGuffin from Fantastic Beasts and Where to Find Them, Credence Barebone (Ezra Miller), because — of course — only Credence is allegedly strong enough to destroy Albus Dumbledore (Jude Law). Meanwhile, Dumbledore has his own counterplan in motion, with Newt Scamander (Eddie Redmayne) as the main player.

Josh: What a dumb name, by the way. “Newt’s commander”? “Nude Charmander”? It distracted me every time someone said it out loud. What happened to the imagination that created such evocative names as “Dolores Umbridge,” “Remus Lupin,” and “Lucius Malfoy”?

Arley: There was actually one positive point for me about this movie. Depp brought a lot of interesting acting choices without making it too ostentatious. He had a great, subtle intensity. Like, the way he looked at something, for example.

Josh: Visually, everything about him seemed so overdone. If they’d toned down on his hair and makeup it would have been a sinister, creeping kind of evil.

The movie features a strong cast of individuals, but each individual faces different problems in their performances which diminishes the ability to give this movie their best. Depp is over-costumed. Law is, perhaps, under-costumed, making him seem like “Jude Law playing Dumbledore” rather than Dumbledore. Redmayne is over-directed and overdoing the “I’m so shy and awkward” shtick. Dan Fogler does a solid job of playing Jacob Kowalski, which gives a sense of grounding, but the role is unfortunately trite amidst the general mess of the movie.

Josh: I know Eddie Redmayne is not a bad actor but his character is so irritating. And I couldn’t understand him because he wasn’t projecting his voice. He spoke in a very monotone British accent, kind of mumbling, and it all blurred together into one background noise.

Arley: Newt was playing Dr. Who. He is the Doctor — he’s like an alien, basically, and he has traveling companions and his sonic wand.

And then there’s the women.

Arley: My problem, because I’m a low-key feminist —

Arley: — is the whole thing again, the women. I mean, Newt has not one, but TWO beautiful women after him: Tina (Katherine Waterston) and Leta (Zoë Kravitz). And this is set out right at the beginning of the movie! Jacob has Queenie Goldstein (Alison Sudol) going after him.

Josh: I think Newt actually has three women inexplicably fawning over him, if you count his assistant. She even tells him to take off his shirt. Credence catches the eye of Nagini (Claudia Kim), just because… he’s there, I guess?

Arley: They are basically hot and powerful women and inevitably fall for dopey, nerdy, or (at best) average guys. They’re presented as trophies, rewards for being dopey, nerdy people. And you don’t really see the reversal, the hot guy going for the dopey, nerdy woman.

There are so many plot holes that we’d be hard pressed to list them all and it would get boring, but a few of our favorites: when a plot point depends on a misunderstanding between a telepath and her lover, it totally makes sense that she doesn’t know how he really feels! Especially when her powers can pinpoint emotions and thoughts in other scenes. Or when someone like Newt is chosen to assassinate another character… because he likes animals? There’s not really any logical reason for an assassination in the first place, but then, this movie doesn’t rely on having logical reasons for anything.

Josh: They don’t set a foundation for most of the things that happen in this movie, so at the end I don’t care and I’m not convinced. I don’t believe your magical lies.

Arley: For me the problem with Rowling has always been “random plot, because I want stuff to happen.” Not to mention the magic has no rules! In all 10 movies the magic has no logic and no system. Magic works when it’s convenient, doesn’t work when it’s convenient. Oh, I have this spell for the thing I need, but inexplicably don’t have that other spell, because “plot complication.”

Josh: This movie is long and convoluted and doesn’t make a lot of sense, which was the critique given to the first two Harry Potter movies, directed by Chris Columbus. But those ones did so well because they had good source material. Everyone went because they liked the books. Problem is, there is no source for these movies — you can’t make a long boring movie again and expect to have the same childlike experience that the first movies had.

Josh: I can’t see this being marketed to that same age group — it seems like it’s trying to be a darker movie but at many points it’s too silly to hit that mark. Some of these “fantastic beasts” have nothing to do with the plot at all.

Arley: It’s so obvious that it’s almost desperate, how they’re trying to lean on the sparkly moments. Look how they use cute things, just all these random insertions.

Josh: Some of the visual effects were cool, I will give them that. The Chinese cat-dragon monster looked good, and so did the scene at the end of the rally when the wizards were flying away in columns of smoke. The set design, the costume design — very Brutalism, very gray.

There’s a story buried in here if you take out Newt and his animals. If the movie focused less on trying to shoehorn in characters and beasts and moments and sparkly stuff and hot girlfriends/wives/lovers/random flirts — instead if it focused on a solid story about a wizard shadow war, with magical spies and politics, the commentaries on ethics, surveillance, and genocide would really shine. The bits are all in there, hiding behind the flash of forced fun. Moreover, those bits are the kind of stuff we really love.

If you are in it for visuals and star power, if you love the tradition of random spells and effects, if you really don’t care about plot or story, or if you just like the concept of a tale set in the Wizarding World of Harry PotterTM, you just might enjoy this movie. Be warned: when asked, more than a few hardcore Potter fans described this movie as “all right.”

Arley: J.K. Rowling has become the person that everyone is afraid to say no to. 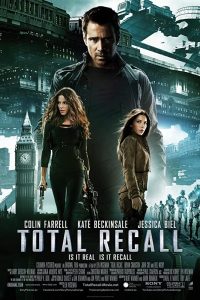 Memories of Philip… and Arnold: A Review of Total Recall 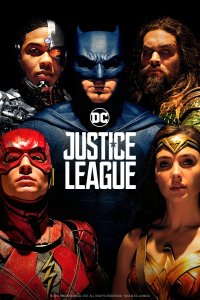 Six Characters in Search of an Auteur: A Review of Justice League, by Gary Westfahl 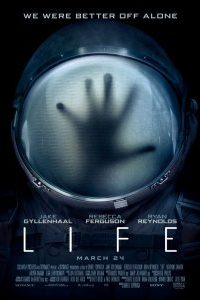 Mutiny of the Unknown Alien Slime: A Review of Life