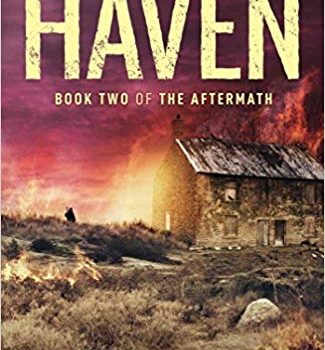 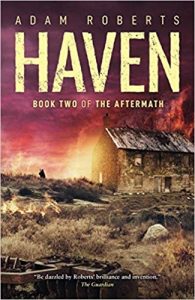 You can tell this novel is by Adam Roberts. It is set a hundred or so years in the future, after a global catastrophe, the collapse of civilization as we know it, and the painfully slow emergence of a way of life that is at best nasty, brutish, and short. For all that, he still manages to slip a reference to XTC into the first paragraph. Actually, there are more references to late-20th-century pop music than it is worth counting, but this is the important one, the one that acts as a leitmotif throughout the novel. Davy, 13 years old and, as we quickly gather, rather young for his age, has epilepsy, not a particularly safe af­fliction in this brutal post-catastrophe world. His Da refers to the flashing lights that presage an attack as “senses working overtime,” and when Davy finds himself separated from his family, it is his senses and, unexpectedly, his epilepsy that he has to rely on to survive.

Haven is book two of The Aftermath, though it might be better described as a companion rather than a sequel to Dave Hutchinson’s recent Shelter. It’s a couple of years after the pointless, petty war at the heart of Shelter, the scene has moved some miles down the Thames, and none of the characters from that earlier novel reappear. The only obvious consequence of those earlier events is that the forces of Guz, the well-equipped community centered on Plymouth, have now become established throughout the Thames val­ley. Meanwhile, the rather less civilized forces of Father John have started to move in from the North, setting up a major war of conquest.

In between these two competing forces is the all-female community of Wycombe. Wycombe is far more powerful than it appears, though, largely because it has rescued and mastered quite a lot of pre-collapse technology. Now it is rumored that they have their hands on something really special, but to make it work they need Davy. And if Wycombe is after Davy, then Guz and Father John must be after him as well, with the intention of killing him if they can’t capture him.

So Davy, without any idea what any of this is about, suddenly finds himself in the middle of three warring factions. In rapid succession, he is kidnapped, rescued, captured again, rescued again, and in a desperate flight for his own life, never knowing who his various captors or rescu­ers are, who to trust, or why any of them might be after him.

This gripping race that sweeps across the first half of the novel is played out against a bitter, bleak midwinter landscape. One of the charac­teristics of the English cozy catastrophe is the way the land itself becomes an antagonist in the story, a startling image of disorientation and an ever-present threat to the unwary. Adam Roberts, has consistently revealed a deft touch with land­scape writing, which makes him a natural fit for this type of story, and here he presents a brittle, icy picture. The Sisters, the fragments of comet that battered the Earth a century before, have upset the climate, giving England a longer and harder winter than ever, while the Thames has grown deeper and wider. Reading, for example, was drowned long ago, and now the river’s treacherous marshy edges, crisp with frost, threaten to trick the unwary into waters on the point of freezing over, waters so cold they would kill in moments. Davy’s flight is through a landscape that is every bit as deadly as the enemies it hides.

If Hutchinson’s novel presented the idea that the true catastrophe is the human propensity for violence, Roberts explores the necessary stub­bornness and persistence that ordinary people need if they are to survive in such brutal times. These are qualities that Davy must acquire during the course of his struggles, but in their maturity they are best displayed in the character of Hat, whose story interweaves with Davy’s throughout the first half of the novel. Hat is an old boatman, plying his trade along the reaches of the Thames between Swindon and Oxford, bloody-minded, independent, beholden to no one. When his boat is sunk maliciously, he devises an ingenious way of refloating it, only to discover a body hidden below decks. Hat is perhaps the most engaging character in the novel, and when he disappears from the narrative at around the halfway point, the novel loses something of its sparkle.

The second half of the book feels rather like a dying fall. After the pace and excitement of the first half, everything slows down. Davy is captured by Wycombe and slowly begins to learn something of what is going on, but the menace is gone, the escalation of war has moved largely off stage, and even the arrival of spring with its bluebell woods and sweet airs means that the landscape is no longer a threat. The novel seems to end rather than being resolved, as if there is more to come, but with no uptick of danger to suggest what that might be. 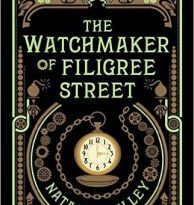