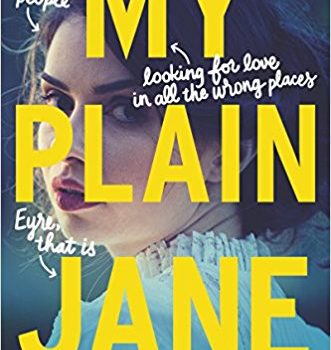 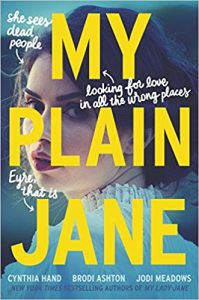 Let’s get this out of the way right now: you do not need to have read (or liked) Jane Eyre to enjoy the hell out of My Plain Jane. Over the years I have tried to finish Charlotte Brontë’s “masterpiece” many times and could never get past my frustration with Jane’s willingness to put up with Rochester’s obnoxiousness, nor my questions concerning what the heck happened to Bertha. But take heart, dear readers! The authors of My Plain Jane clearly have their own frus­trations with the classic and, while sticking to the original plot, have managed to take Brontë’s work on with a degree of wit and humor that is irresistible. This novel is pleasure reading at its finest; it delivers fully on its promise of “an adventure of Gothic proportions,” while includ­ing new characters, ghosts, a lot of laughs, and an enormous amount of girl power that still has me smiling.

The basic framework of Jane Eyre remains intact in the My Plain Jane world. Jane is first introduced at the Lowood school in northern Eng­land in 1834. She is an orphan with few prospects and the school is a place of abject misery. Jane responds to an advertisement for a governess and takes a position working for a dark and mysteri­ous man named Edward Rochester who has a young ward named Adele. Over time Jane falls for Rochester, but cannot shake concerns over his strange household, which includes an entire wing she is forbidden to enter. There is a fire and there is a wedding and there is a creepy servant named Grace Poole. But… nothing happens the way you think it will because in this version of the story, Jane sees dead people and, in 1834, there are a lot of dead people.

In a breezy introduction the authors bring read­ers up to speed on a few of the differences in their England. The most notable is the existence of the Royal Society for the Relocation of Wayward Spirits. If there is, as they write, “something strange in your neighborhood,” citizens can contact the Society and obtain help. Operating out of Westminster Abbey and led by Arthur Wellesley, the famous 1st Duke of Wellington, the Society is however suffering under budget constraints from a ghost-doubting king. It is thus a stroke of good fortune when the current Society ghosthunter Alex­ander Blackwood, (and his partner, a rather hapless young man named Branwell Brontë), discover that Jane Eyre can see ghosts.

The Brontës are major characters in this novel: Charlotte is Jane’s closest friend and shares her horror early on at Lowood. She is also hard at work on a novel and finds much in Jane’s new life as a governess in such an odd setting to inspire her writ­ing. But there is a lot more going on at Thornfield Hall than readers might suspect, and the Society becomes caught up in not only getting to the bot­tom of things with the Rochesters, but also trying to recruit Jane and, of course, save England. All of this happens in the midst of some very funny wordplay that includes a few nods to modern politics, such as this brief exchange:

“Right,” Alexander leaned back in his seat. “Earlier this year, His Majesty decided to balance the royal budget.”

“He kept Meals on Wheels and the National Endowment for the Arts,” Branwell said, “be­cause we aren’t animals, for pity’s sake.”

Mostly though, My Plain Jane is about how girl friendships can save you, and about strong family bonds that prevail in all circumstance and a bit of romance (but not from who you suspect). It also puts that whole “mad woman in the attic” trope to bed, finally, and provides a much more satisfying story for Bertha Rochester. I do hope that authors Cynthia Hand, Brodi Ashton & Jodi Meadows had as much fun writing this novel as I did reading it and that they will turn their talents to other classics as well. (No pressure, but Wuthering Heights could really use their help!)