Features Spotlight
September 14, 2018August 29, 2018 locusmag 0 Comments Spotlight
Jason Kirk is a senior editor for Amazon Publishing’s 47North and Skyscape imprints. Books edited by Kirk have won the Arthur C. Clarke, British Science Fiction Association, and UTOPiA Book of the Year Awards, and have been finalists for the Philip K. Dick and Bram Stoker Awards. Prior to joining Amazon Publishing in 2014, Kirk worked in magazine publishing and music journalism for 15 years. Aside from his interest in science fiction, fantasy, and young-adult books, Kirk also publishes poetry and performs on stage as a vocalist and trumpet player. You can find him online @brasswax.

Tell us a little about the history of 47North. When was it founded, and when did you join? Does it have a particular mission statement or niche you hope to fill?

47North published its first book in October 2011, and I joined in February 2014. We publish science fiction and fantasy in most genres of speculative fiction, but rather than aiming to fill a specific niche, we publish a wide variety of stories, some that appeal to core genre readers and others for readers of commercial or literary fiction who are open to at least a light speculative element. In all, our books range from pure entertainment to critically acclaimed and award-winning books that tackle important issues from the “real” world, as science fiction has done – and often done very, very well – since its inception, which I mark as the publication of Mary Shelley’s Frankenstein 200 years ago.

You also edit for YA imprint Skyscape. Tell us about that.

Skyscape publishes young-adult science fiction, fantasy, and contemporary novels. We’re celebrating our five-year anniversary this year, and I joined this team a few years ago. At first, acquiring young-adult books involved a bit of a learning curve for me, but I had a “secret weapon” at home, namely my teenage daughter. When I found the first YA manuscript that I really loved – Rebekah Crane’s The Odds of Loving Grover Cleveland – I asked my daughter to read it, and when she said it was her new favorite book, I knew we had a winner (she even gave the book its final title). Since then I’ve acquired a number of contemporary and fantasy YA, and with every new book, I come to appreci­ate more and more why so-called “young-adult” books are for readers of all ages. Some of the most passionate YA fans I’ve met are parents, teachers, and librarians, and when I talk to them about specific books, it’s clear that their enthusiasm isn’t just for the effect that these stories have on teens.

Your imprints are unusual because of their close connection to Amazon.com, the biggest online bookseller in the world. What special opportunities does that relationship offer? What challenges does it create?

At Amazon Publishing, we aim first for happy authors, and that goal informs everything we do. As a global publisher, situated within a company that has a large book-buying audience and values innovation, we as editors have the abil­ity, the privilege, and most importantly, the challenge to invent on an ongoing basis. And that particular challenge is often the most inspiring and rewarding part of the work. Amazon Publishing encourages us to experiment, which leads to new programs and author services – from marketing programs to monthly royalty payments and beyond – that authors love. As an editor and life-long book-lover, I really cannot imagine a more exciting place to work.

You edited recent Arthur C. Clarke Award-winner Dreams Before the Start of Time by Anne Charnock. Tell us about the experience of acquiring, editing, and publishing that book.

Anne is brilliant, in both the American and British senses of the word. I had edited her prior book, Sleeping Embers of an Ordinary Mind, and loved both the story and the experience of working with her, so when she pitched the idea of Dreams Before the Start of Time, I jumped at the chance to work with her again. The story spans three generations and is told through the perspectives of multiple narrators, and the distinct challenges that these structural aspects of the story demanded of me as an editor were legion. But that’s part of the fun. As T.S. Eliot said, how do you know how tall you are until you’re in over your head? The book then won the prestigious Arthur C. Clarke Award, and that’s wonderful for both Anne and the book, but I wouldn’t trade either her trust in me as an editor or what I learned from editing this book for any laurel.

How are things going now? How many books are you publishing each year, and what recent titles are you especially excited about?

Things are going great. It’s hard to choose just a few books to talk about here. On the Skyscape side, I’m really excited about The Rule of One by Ashley & Leslie Saunders. This debut novel imagines a dys­topian, near-future United States that suffers under a one-child policy. For 18 years, its identical twin protagonists have lived in hiding, and when their existence – a crime by its very nature – is exposed, they go on the run, and their adventure begins. Oh, and the book is written by identical twins!

For 47North, I’m really excited about the release of David Sosnowski’s Happy Doomsday, a deeply empathic and frequently hilarious postapocalyptic story that gleefully upends many of the genre’s well-worn tropes. Most of it takes place very near where I grew up on the west side of Detroit, so I have a very personal soft spot for the book.

And both books’ covers came out beautifully, which is always worth getting pretty excited about, since even though we all know not to judge a book by its cover, if you truly love books, you can’t help but judge a book’s cover.

What’s happening next? What works are on the horizon, and what kinds of material are you looking for in the future?

47North and Skyscape will continue to publish new books that will span a range of genres, and since series are pretty popular in science fiction and fantasy, some of them will be sequels to books we published this year. I’m looking forward to seeing readers’ responses to all of them, but a few are particular passion projects for me.

Skyscape will publish Victoria Lee’s debut novel, The Fever King, in March, and aside from its really interesting blend of science fiction and fantasy, this book’s wildly imaginative take on issues pertaining to immigrants, refugees, and sexuality makes it a very timely story, not to mention that it’s also just a ton of fun. I also love publishing debut novels, because there’s one for any author, and so the pressure’s on me to help facilitate the very best first publishing experience that any author could hope for.

47North will publish Sean Gandert’s American Saint next summer, and I’m neck-deep in edits on this one right now. Sean’s debut, Lost in Arcadia, came out last year, and with it, I felt like I’d discovered my first bona fide genius. His new novel, a contemporary story of magical realism set mostly in New Mexico, challenges readers to contemplate the fine line between the magical and the miraculous, the unreliability of memory and first-hand eyewitness, and the nature of belief itself. Sean writes very high-stakes speculative fiction, and it’s been a steep pleasure and a major challenge to edit his books.

As for what I’m looking for, it always starts with a peerless narrative voice. Since we approach stories – in novels, at least – through the veneer of language, the language itself needs to stand out for a manuscript to grab my attention at first blush. I’m also a sucker for what I call “an airtight concept,” meaning stories whose central premise (the magic system, the speculative scientific element, etc.) is both one of a kind and easy to get others excited about. Case in point: Charlie N. Holmberg’s Paper Magician series. Without fail, when I tell people that this fantasy series is based on “paper-folding magic,” they immediately get at least a visual sense of what that means, whether they think of origami, paper airplanes, or something else, and with that initial visceral hook, it’s a simple matter to pique their interest after that.

What changes do you foresee in the publishing industry in the future? How are you positioned to respond to those changes?

As countless science-fiction novels and nearly endless commentary about them will attest, predicting the future is a fool’s errand. So I think about this question less in terms of what I can foresee than in how well I think we are positioned to help determine that future, on the one hand, and to react to the things we can’t foresee, on the other. As I said, I feel distinctly privileged to work with people who are both devoted book lovers and, as it happens, the smartest group of professional colleagues that I have ever managed to sneak my way into. Those factors, coupled with Amazon’s DNA-level commitment to innovation, leave me just short of breathless about the future. Whatever it holds, I’m confident that we’ll be a part of it, and so the fact that the future isn’t clear is that much more exciting as a result. Bring it!

I came to the vocation of editing as a writer first. I have an MFA in poetry and have been writing since long before that, and when I first tried my hand as an editor by launching a monthly magazine (why start small?), my main motivation was to act as an enthusiastic advocate on behalf of other writers. Until I could find that sort of life-changing advocate for my own work – whether it be an editor, an agent, a celebrity endorser, whatever – I wanted to serve in that role on behalf of other writers. Twenty years later, I still haven’t found that person for my own writing, but the desire to be that person for other writers has not diminished in the least. 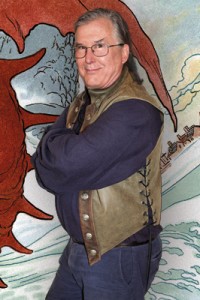 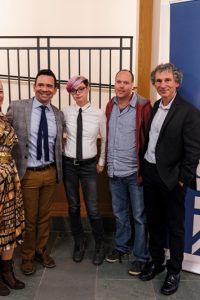