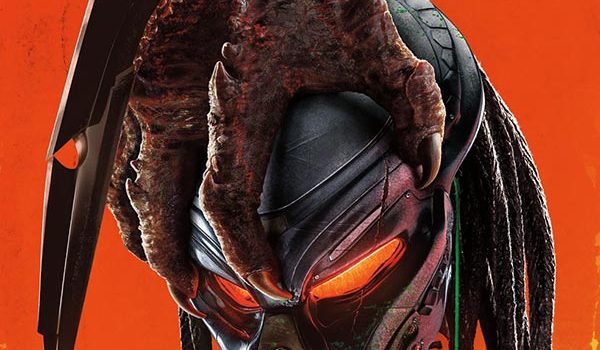 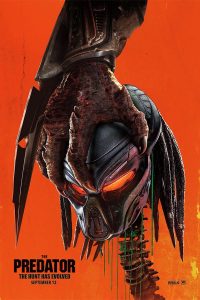 Somewhere in the Central American jungle, Army Ranger sniper Quinn McKenna (Boyd Holbrook) encounters a crashed Predator escape pod. He loots it and later mails the alien’s high-tech helmet and wrist gauntlet back to the US.

Scientist Casey Bracket (Olivia Munn) is taken to a secret government facility where the Predator from the crash (Brian Prince) is being held. The Predator breaks free and goes in search of its missing equipment. Unfortunately, McKenna’s package has been opened by his young, genius son, Rory (Jacob Tremblay) who uncovers the location of the alien’s main ship.

Quinn is captured by the military and taken to the secret facility, where he teams up with Bracket and a busload of other military prisoners, “the Loonies,” to reach his son before the Predator and government forces — led by agent Traeger (Sterling K. Brown) — do.

All this before an even more advanced Predator arrives from deep space!

Arley: This is pretty much an updated ’80s movie. It’s got a classic kind of opening sequence which tells you right away it’s an ’80s movie, but with upgraded effects and slightly updated plot tweaks.

Josh: You asked me what I thought of this movie before we even saw it and I said it was going to be the best Predator movie since the first one. And the assessment holds up. It includes references to the first Predator (1987) without them feeling shoehorned; it plays on some of the more famous quotes, and keeps the music from the original throughout, which really anchors the feel.

This franchise is so old and established in popular culture that nobody (audience or characters) can pretend not to know what a Predator is. Thus, the hiding and stalking of decades past is downplayed in favor of pure action. The signature camouflage gimmicks are less effective now — in several scenes, characters and audience members can easily see where a camouflaged Predator is. What was once an OP ability is reduced to a plus-one advantage.

Not that it matters. Who needs to hide when a hailstorm of gunfire doesn’t even slow a Predator down?

An “evolved” version of a creature we’ve previously seen before (not a spoiler: it’s right there on poster) is a dead horse and often not an entertaining improvement on the original — see franchises Blade, Alien, Underworld, Resident Evil, Terminator, and Jurassic Park — but the story here doesn’t dwell too long on it. Even though an evolved Predator is probably unnecessary (since a regular Predator would pose enough threat as is) the banter and breakneck speed pulls the audience along, racing past sticking points.

The characters are refreshingly hypercompetent. McKenna, Bracket, and fellow military prisoner Nebraska Williams (Trevante Rhodes) each get impressive, though understated, demonstrations of dexterity. No one makes stupid choices when faced with the fact that they are all simply outmatched. Every member of “the Loonies” has fairly distinct personalities even if some of them substitute tics for characteristics. They are sympathetic enough that you feel bad once the inevitable happens and they start getting picked off. Sterling K. Brown’s agent Traeger is also a noteworthy performance with his own sense of humor. The least interesting character may be the hero, Quinn McKenna.

Arley: He’s a cutout: uber-masculine “all-American.” It’s a little bit one note among today’s narratives. But I personally thought he did a good job fulfilling that role. Also, they put a lot of money into this movie. It was kind of an ensemble-cast action movie.

Josh: But not over the top like The Expendables.

Arley: This is still very much a guys’ movie.

Josh: There were two women in the entire movie, which is TWICE as many as in the first movie! That’s a 100% increase! We’re making great strides here. But okay, with all sincerity now, Olivia Munn is a badass. The first we see of her, she’s stripping down and running after a Predator with a tranquilizer gun.

Arley: She doesn’t start as a badass because she gets bullied and dismissed right away by the soldiers. Possible trigger warning for women, with the way Munn’s character is treated in the hotel room. It’s just creepy to wake up with six guys staring at you. But the way women are treated in this movie overall is different than the way they would have been in an ’80s or ’90s action movie.

Josh: I think she’s established as a competent character first to the audience and then has to prove herself AGAIN to the soldiers, coming in as a civilian, an outsider, and a woman. Later her independence and competence is undercut slightly by being the only person who begs for her life, and escapes more by happenstance than the others, than the men, do.

The other woman, McKenna’s ex-wife and Rory’s mother, Emily (Yvonne Strahovski) has very little screen time but is a strong female character. She takes no shit from Traeger and his goons, nor from Nebraska Williams and the Loonies. Unfortunately, the movie wastes her strength by devoting a large percentage of her role to acting as an expository device, to give a frank, emotionally unencumbered description of McKenna and explain what he’s like on a deeper level so that he doesn’t have to, himself.

Josh: I liked the introduction of her, which was just a note to her kid saying, “If you mess up the house, I will cut you.”

Similarly, Jacob Tremblay’s performance as Rory was strong, but his character’s bullying and revenge subplot is heavy-handed. Rory is on the autism spectrum, which aids him in breaking into the Predator’s computer systems. His being on the spectrum doesn’t appear to hinder him much as a character — it mainly serves to turn him into the film’s MacGuffin.

Arley: I found the autism unrealistic. His reactions aren’t consistent from situation to situation.

Josh: I can’t judge on this at all. Also, kids are unpredictable in general, so who knows how they’d really react?

Writer-director Shane Black is known for writing such films as Lethal Weapon and Last Action Hero, and appeared as Hawkins in the 1987 Predator. Accordingly, this year’s The Predator is hyperviolent but also really funny. Gruesome deaths (Josh: Several which made me say “Oh, shit.” Arley: “You’re weak.”) are followed by quick humor which creates cognitive or emotional whiplash, especially during scenes where the violence exists solely to set up a joke. We’re left wondering how a character who has just committed mass murder is still making quips instead of falling into a guilt-ridden, catatonic state.

Arley: The plot is a little bit deceptive and surprising. The individual elements are full of diversion and create sub-threads so that you don’t really know where everything will go. You know where the overall story is going, where it’s going to end up, but the little journeys and how the threads will converge are harder to predict.

Josh: You know exactly which characters are going to be alive at the end of the film.

The rapidity with which things clip along is noticeable. Occasionally the storyline gets choppy and hard to follow. It was difficult to tell where some of the action was taking place, where locations were in relation to each other, and the timescale of the movie is unclear. (Early in the film, McKenna swallows a piece of alien technology to hide it. Make note of how long it takes for him to retrieve it, and then try to use that information to determine how much time is passing on-screen.)

Even so, Black does a good job of spreading out exposition. Bracket gives a lot of exposition on the run, and the narrative even uses off-screen characters’ dialogue to provide information while main characters are on-screen busy doing other things. Lots of different ways to drop details in amongst all the action.

The ending suffers a little from the rush to pack in explosions, decapitations, and lewd jokes. Possible weaknesses in the Predator’s abilities are foreshadowed (twice!) and yet go unexploited in the final fight. Not enough time is spent setting up the ending — a game of hunter/stalker cat-and-mouse with improvised traps, for example — which would have given a satisfactory conclusion to this familiar but fresh Predator.

Erin Cashier (surprise guest!): It was like an extended special episode of The A-Team.

Would we recommend it?

Arley: I would recommend it as a macho action movie with lots of male humor. I think it’s great in that vein.

Josh: Fuck yeah I would, anytime. 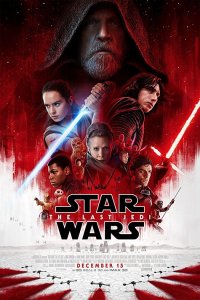 Is It Time to Let Old Things Die?: A Review ofStar Wars: The Last Jedi, by Gary Westfahl 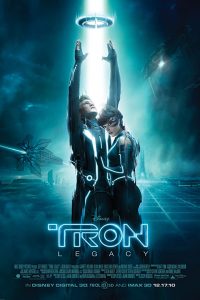 ‘A Huge Moment for NASA’ … and Novelists: A Review of The Martian