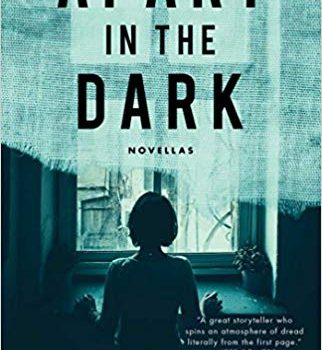 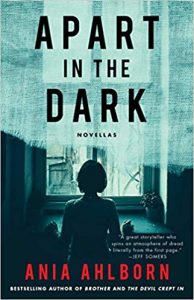 For several years, Ania Ahlborn has been constructing narratives whose concern with aberrant psychology frequently intersects the supernatural. Apart in the Dark collects two novellas, “The Pretty Ones” and “I Call Upon Thee”, previously published electronically, which together offer a good introduction to her work. The book includes an introduction in which Ahlborn discusses her college ambition to be a psychologist, a plan which was fueled by her interest in abnormal psychology, but which was derailed when a psychology professor told a class Ahlborn was in that psychologists did little to help the patients they were seeing. Subsequently, Ahlborn switched her major to English, where she could continue to explore her fascination with the darker precincts of the mind, a preoc­cupation that would feed into her eventual career writing fiction.

“The Pretty Ones”, the book’s first novella, is set in 1977, when the residents of New York City are living in fear of the serial killer who would eventually be known as the Son of Sam. In the time before his capture, all that was known about the killer was a proclivity for shooting young women with long, dark hair, a preference that led women who fit the profile of his type to cut and dye their hair in an effort to evade his murderous notice. This is the case for a number of the employees at Rambert & Bertram, which is where Nell Sullivan, the novella’s protagonist, is employed. Modest in dress and manner, Nell is the subject of derision by her more fashion-con­scious and outgoing co-workers; even the well-intentioned advice her boss gives her places the blame for her lack of popularity on Nell. Taunted by a group of teenage boys on her walk home from the subway, she is equally frustrated by her living situation. She shares her apartment with her brother, Barrett, who is unemployed, spending his days reading and planning a novel that never seems to advance. Mute due to childhood abuse inflicted by their mother, Barrett communicates with Nell through little notes, some of which express his love for her, others of which remind her to adhere to a quasi-puritanical set of mores. It’s little surprise that Nell’s interior weather is frequently dark and stormy. Although she tries to befriend a sympathetic co-worker, her lack of social skills turns her effort into an awkward disaster, while her brother responds to the news that she attempted to form a relationship with someone else with anger, both of which incidents compound her frustration. When the news of that co-worker’s murder reaches the office the follow­ing day, Nell immediately suspects her brother, even as her fellow employees wonder if the Son of Sam has claimed another victim. Is Barrett guilty? The answer seems rooted in his and Nell’s youth, in their experience of a mother whose erratic and frequently violent behavior likely sprang from an undiagnosed and untreated mental illness. Nell finds her memories of this time difficult to face, though, even as the necessity for her to do so grows more urgent, with Barrett increasingly gone from their apartment for extended periods of time and other co-workers turning up murdered. Ahlborn’s portrait of late-1970s New York is of a piece with that of the great films of the era, from Midnight Cowboy through Prince of the City, with stops for Mean Streets, Taxi Driver, and Serpico in between. It is a blend of urban decay and human predation, a stylized landscape in which serial killers are not so much aberrations as expressions of the violence with which the place is unfused. Nell’s psychology is of a piece with the general hostility of her environment, and while it’s perhaps a stretch to equate her with Scorsese’s Travis Bickle, she might well be a cousin, once removed.

“I Call Upon Thee”, the book’s second, longer novella, is a story of returning home. In this case, it’s Maggie Olsen who must leave her graduate studies at UNC to fly to her family home outsider Atlanta when her older sister, Arlen, calls with the news of their middle sister’s suicide. It’s the first incident to which the novella’s title applies; it’s neither the last nor the most significant. This is a narrative built around summons unanswered and answered. In the months leading up to her death, we learn, Brynn had phoned Maggie repeatedly, asking her to come home. Citing the pressures and responsibilities of school, Maggie demurred, until circumstance leaves her no choice. Back in the house where she grew up, Maggie finds a porcelain doll which profoundly unsettles her, stirring memories of her past activities with Brynn. These memories constitute a parallel nar­rative, one in which nine-year-old Maggie is led by twelve-year-old Brynn to the local cemetery. There, Brynn tells her about the child buried in a particular grave, one who suffered a hideous death at the hands of her mother. Brynn tells Maggie that she promised the child’s spirit she would bring her a playmate, and that is the role Maggie now must play. Although Maggie is sure her sister is play­ing an elaborate joke on her, the cemetery setting lends Brynn’s words a sinister weight. Secretly, Maggie pledges to visit the grave, a promise she keeps for a time, until a day comes that she opts to spend her times elsewhere. Soon, her visits are a thing of the past. When she purchases a Ouija board for her twelfth birthday, however, and calls upon the grave’s inhabitant, she appears to summon the child’s ghost. Its resentful presence leads to her father’s death, which in turn causes her mother to descend into grief-driven madness and death. Unable to find any other solution to the dark form haunting the edges of her vision, Maggie at last opts to leave Georgia to pursue her education. Although Arlen and her husband and children move into the house, Brynn refuses to sell her share of it to them, choosing instead to continue her residence there. It seems this left her at the mercy of the ghost, which drove her first to insanity, and then to take her own life. Now, Maggie is aware of Arlen’s children, particularly her older daughter, Hope, as potential targets for the ghost’s malevolent notice, even as the spirit appears happy to have her back with it. As the narrative nears its climax, Ahlborn raises a new and sinister possibility, that what was called with the Ouija board was not the ghost of a child, but something much less human, and much more vio­lent. There are no exorcists waiting in the wings here, though, only a scared and grieving young woman trying to protect what family she has left.

Family is at the center of these novellas, specifi­cally sibling loyalty in the face of maternal dete­rioration and hostility. There’s a concern for the burden of the past, and for madness, that places both narratives firmly in the Gothic tradition of Daphne du Maurier. Together, they form a fine introduction to the work of a writer who sounds the human mind in all its cavernous depths. 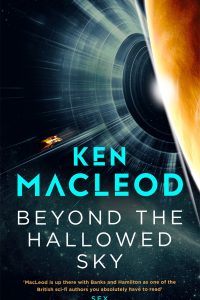 Russell Letson Reviews Beyond the Hallowed Sky by Ken MacLeod 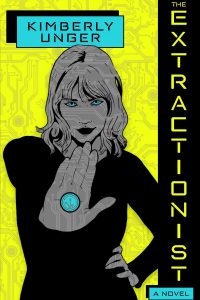