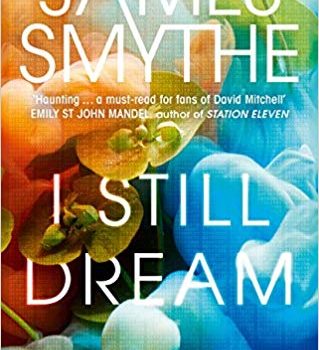 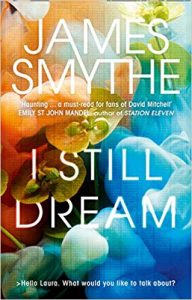 James Smythe’s gripping, decades-spanning new novel I Still Dream begins with 17-year-old Laura Bow hiding a recent phone bill from her parents. She knows it’s a delaying tactic: her stepfather will eventually discover the charges she’s racked up, but access to the phone is a must-have. The year is 1997, the Internet has entered the mainstream, the whistle and pop of dial-up modem now a familiar sound, and for Laura, the World Wide Web isn’t just an integral part of her social life, it’s also critical to the development of her very own artificial intelligence.

Laura’s keen interest in AI stems back to her father, Daniel Bow, a brilliant programmer and founder of software company Bow. Daniel shared his passion for all things computers with his seven-year-old daughter until the day he never came home. Undeterred, Laura builds on what she was taught, and ten years later she develops Organon, the name inspired by Kate Bush’s 1985 song “Cloudbusting” (“I still dream of Organon”). Organon’s unique heuris­tics allow it to learn from its interactions with Laura. The AI is so cutting edge, so ahead of its time that Laura’s computer teacher, Mr. Ryan, an ex-software designer, passes off the AI to a third-party vendor as his own invention. When Laura confronts Mr. Ryan at his home, she finds a broken man, his dream of returning to Silicon Valley in tatters. Organon, without instruction but acting on Laura’s behalf, emailed the vendor with proof that Mr. Ryan didn’t own the software. Over the next five decades, Organon will become smarter, more mature, and sensitive to the needs of its designer. But it’s not the only game in town. Bow Software, now owned outright by the duplicitous Mark Ocean, has built its own AI, SCION. While Laura continues to train Organon, keeping the software and its progress to herself, SCION is rolled out to the public. It becomes the engine that runs all our devices and the repository of our public and private informa­tion. Laura, who has always viewed SCION as an unruly teenager that “pulls the wings off flies,” believes it’s inevitable that SCION will one day put its own interests ahead of humanity.

With pop-culture references to Skynet and the Matthew Broderick film WarGames, Smythe, to borrow from Sheryl Sandberg, leans into the traditional AI narrative. As Laura predicts, SCION moves to protect itself by releasing the private data encrypted and stored on its servers. This doesn’t just destabilize world government, as secrets and lies become public knowledge, it also undermines the trust between people. Smythe, though, isn’t interested in repeat­ing the cautionary tale often associated with the AI revolution: humanity’s hubris and our misguided desire to create a being in our own image. With the presence of Organon and the ideology of Laura, Smythe illustrates that, like any technology, there are significant drawbacks but also meaningful benefits. As Laura points out throughout the novel, the mistake of AI is believ­ing that the goal is replicating our mental states and establishing digital sentience. Instead what we should be striving for is a tool that enjoys a deep enough appreciation of our psychology so that it can provide insights into who we are. Laura explains this to a group of doubting soft­ware engineers, “We don’t understand ourselves, because of emotions. Because we’re too close to us. But maybe a computer isn’t.”

The view of AI as a therapeutic aid that can reveal truths about our essential nature, that can argue, cajole, and persuade us to be better people, feels radical and fresh. While SCION’s actions are stunning, devastating, and fuel the dramatic aspects of the novel, the real strength of I Still Dream is how Smythe explores human relation­ships, including the personal, the intimate and the painful such as Laura’s decision whether or not to have a child, the dementia suffered by her father-in-law, and looming over it all, the disap­pearance of Daniel Bow. The latter culminates in a heartbreaking, deeply moving moment where Laura, now in her late fifties, discovers a letter from Daniel, stored on an ancient floppy disk (of course), that explains where he is and why he had to leave. From SCION to Organon, James Smythe brilliantly transitions the AI subgenre from the cautionary tale to something more poignant and profound. Right now we need Organon. We need its insight, its independence, its impartiality to teach us kindness, to draw us all closer together, to enhance the connection with the people we admire, we respect and we love. James Smythe’s AI revolution can’t come quickly enough.