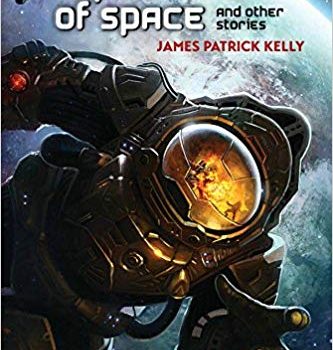 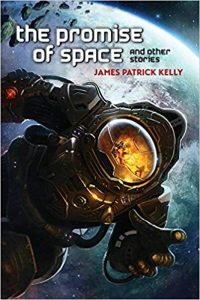 In his afterword to The Promise of Space, James Patrick Kelly assures us that none of the 16 stories were included in his massive Centipede Press collection from a couple of years ago, the impos­ingly titled Masters of Science Fiction: James Patrick Kelly – which serves as an indication that his accomplished career as a short fiction writer, stretching back some four decades, shows no signs of flagging (the oldest story from this collection dates to 2007, most are since 2011, and one, “Yukui!”, is original to the collection). Over the years, Kelly has produced his share of classics (“Think Like a Dinosaur”, “Mr. Boy”, “Itsy Bitsy Spider”, “1016 to 1″), and I suspect a few clunkers, but his sheer consistency and competence can be both a blessing and a curse. As he also points out in his afterword, “I try to write as many different kinds of stories as I can,” and this can make him maddeningly hard to pin down, especially for readers who value the comforts of familiar settings and characters. There are a few such comforts on display: a couple of stories are set in his Thousand Worlds universe – basically just an Ekumen-like convenience for planetary-colony tales – and one of the strongest, “The Last Judgment”, features the hardboiled detective Fay Hardaway from 2016’s “Men Are Trouble” (not included here), a wonderful character who combines the problems of a working mom in an all-female world (aliens rather helpfully removed all the men) with a Chan­dleresque ear for pretentiousness (“he was trying for brooding menace, but he just sounded sleepy”).

“The Last Judgment” also makes use of other Raymond Chandler figures – a wealthy society matron, a rebellious granddaughter – and, more importantly of a Chandler-style plot, in which a comparatively straightforward investigation (in this case the theft of a small Hieronymus Bosch painting) leads to clues which spiral outward into more conspiratorial issues, here involving the true role of the alien “devils” who caused all the men to disappear years earlier. And that, in turn, reveals another aspect of Kelly’s fiction that can make it especially rewarding for some readers while challenging for others: his acute awareness of the materials of genre. In one sense, he can be a skilled ironist in the William Tenn tradition, but he more often reveals and exploits ironies already implicit in much earlier SF (most famously, I sup­pose, in “Think Like a Dinosaur”). Few readers of Childhood’s End, for example, will be able to avoid thinking of Clarke’s demon-like Overlords when reading of the alien “devils” in “The Last Judgment”, but here the devils (who also get con­nected to Bosch’s demons) seem far more clue­less, if equally well-intentioned. “A vain attempt to recast history,” explains a sex-change doctor. “Instead all it proves is that they’re aliens who got biological sex, gender identity, and gender roles all mixed up.”

Since I’ve mentioned Clarke, Kelly is certainly aware that the title of his lead story, “The Promise of Space”, is borrowed from one of Clarke’s more dewy-eyed paeans to the coming space age (just around the corner, back in 1968!) That title comes with its own built-in irony, of course, but Kelly doubles down by casting the story as a heartbreak­ing dialogue between a science fiction writer and her neurologically damaged Mars-pilot husband as he vainly tries to reconstruct his personality from thousands of hours of recorded life-video. It’s the most emotionally arresting piece in the collection. “The Chimp of the Popes”, on the other hand, gets its title by inverting the title of a famous Robert Silverberg story (it was written for a Silverberg tribute volume), but the story itself recalls such ear­lier classics as Brian Aldiss’s “Who Can Replace a Man?”, only in this case it’s uplifted chimps rather than robots dealing with the near-total disap­pearance of humanity (most of whom have been “gathered” into the “cognosphere”). A surprising number of the few hundred remaining humans are delusional (several think they’re the Pope), but robots also play a surprising role in a story that’s at once complex and playful critical fiction.

The idea of people uploading – by now another familiar SF trope – also plays a significant role in a couple of other stories. “Declaration” raises the question of whether the choice to upload should be an inherent right, and which like “The Promise of Space” revolves largely around conversations with a brain-damaged family member (the protago­nist’s twin brother, whose “naked, twitching body, suspended in its protective mesh” complicates the argument about the right to upload). “One Sister, Two Sisters, Three” is one of the Thousand Worlds tales, set on a colony planet which has developed an odd, math-based religion vehemently opposed to uploading – which creates a moral dilemma for the sisters of the title when their mother, faced with a fatal illness, makes the decision to upload herself. A rather different kind of uploading, at least of a sort, is the central image in the most effective SF horror story here, “Soulcatcher” – another tale motivated by sisterly love, in this case concerning a textile merchant who lures the abductor of her clone sister into a trap involving a near-magical rug – the soulcatcher of the title – which traps and sustains the living heads of its victims.

For all his playing with classic SF tropes, how­ever, many of Kelly’s stories revolve around the problematic dynamics of relationships, whether siblings or spouses, invisible friends (as in “Don’t Stop”), annoying doppelgangers (“Crazy Me”), old lovers (“Surprise Party”), sexual partners (“Oneness: A Triptych”), or lost younger versions of a girlfriend or wife (“Miss Nobody Never Was”, “Happy Ending 2.0”). The one new story, “Yu­kui!” is set up as a familiar tale of getting dumped in a relationship – only the one getting dumped isn’t actually a girlfriend, but a digital sidekick, or “dependent intelligence,” who must begin to come to terms with the idea of independence – not a terribly original conceit, but one that Kelly sells convincingly through the sheer agony and passion of Sprite, the sidekick in question.

In her introduction, Sheila Williams praises Kelly’s “compassion and grace,” his ability to “perceive the complex interplay of friendships and relationships,” and in the end these qualities prob­ably define his fiction more than his sophisticated use of genre materials. For this reason, it shouldn’t be surprising that the four fantasy stories here are among the strongest in the book. Perhaps the two most unexpected are “Happy Ending 2.0”, which recalls the sort of timeslip stories that Robert Coates or John Cheever used to write for The New Yorker, a tale of an unhappy New England couple setting out on a trip to a cousin’s country house to “see if they can find themselves again” – which they do in an unexpected way – and “The Rose Witch”, a lovely fairy tale in which a young ap­prentice to a now-deceased witch meets a young “knotted man” whose ruined family castle can only be restored through a magical intervention, which turns out to involve a crucial choice the girl must make. A few decades ago, Kelly – along with John Kessel, Connie Willis, Nancy Kress, and Kim Stanley Robinson – was included by Michael Swanwick in a list of “new humanists” contrasted (rather artificially) with the cyberpunks. Maybe he was one, but, on the basis of stories such as this, maybe he’s really been a new romantic all along.