A vagabond, a pit-fighter, a noblewoman, and a dung-collector stand in a crowded square to witness the execution of a dissident madman. Though strangers before that overcast day, the condemned man’s final ravings upon the scaffold will bind them inextricably. Marked to deliver his body safely to a doom-cult, the four hapless individuals discover that failure risks their sanity. And their souls.

That was the story hook for a roleplaying game I ran for some friends not long after graduating college. Shocker, right? A guy who writes fantasy novels admitting to playing Dungeons and Dragons (D&D). Well, actually the description above came from a game of Warhammer Fantasy Role Play (WFRP), but you get the point. It would be easier to ask which fantasy authors don’t enjoy tabletop RPGs. I’d wager the list is much, much shorter. 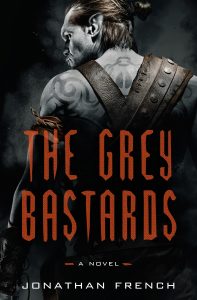 So, it’s an almost ubiquitous hobby for certain writers, but what about as a training tool for writing? That answer is more complicated. I can tell you that the only group outnumbering the fantasy author roleplayers are the roleplayers that think their game would make a great book. And usually, they’re wrong. There’s a reason why the joke about the guy droning on endlessly about his D&D character exists. In my experience most gaming sessions are “You had to be there” events. The fun comes from the participation, the collaborative storytelling, the investment of time and (if the game is good) emotion. But that fun is often very insular, self-referential, and blind to solid story structure. After all, as a roleplayer the events are happening to you, so it’s easy to get caught up in the adventure, but an audience is more removed and harder to please. Imagine a concert where the band isn’t very good, but really enthusiastic during their performance. It may hold the attention of the concert-goers for a song or two, but it’s doubtful they’ll stick out the entire show. Mind you, this isn’t a criticism. I think the charm of roleplaying comes from this very nature. You have to play to get the true rewards. Participation is key. It’s not something for spectators, but for interactors. Point is, it’s a rare gem of a game that can go directly to the page and make a decent novel.

That said, as an author without a writing degree, I can’t entirely discount the hobby. It’s certainly a whetstone for writing, but only if you pay attention. Whether as a player or a Game Master (the person that runs the game and comes up with story), there’s a tendency for roleplayers to sink into a state of creative narcissism. “I’m going to make sure my character is the most badass.” “Here is the moment my character can save the day.” “This is my world and my villains are going to shine in this epic story of my creation.” Again, the bad band analogy comes to mind: the lead guitarist taking a solo at the same time as the drummer while the front man attempts to belt out a power scream. It becomes a bunch of individuals trying to upstage one another. However, if you can take a step back and begin listening to the group, discern what your fellow gamers are trying to portray with their characters, and actually seek moments to use your character to help them shine as opposed to just yours, you begin to foster a real ensemble. Few things improve a book more than a well-written ensemble.

This balancing act of participating in the story while keeping track of what others are doing is not far removed from the prime philosophy used by good improvisational actors. Pay attention, take what you’re given, improve it if you can, and give something back. For writers interested in crafting character-driven stories, the benefit of understanding such interplay by experiencing it regularly in real-time at the gaming table can be huge.

Learning to improve plot isn’t off the table (see what I did there?). Likely we’ve all heard writers talk about characters misbehaving and doing things the author never intended. No one knows this pain better than a Game Master. Players are living engines of chaos, usually because they are trying to suck up all the attention. That whole creative narcissism demon again. Yet even well-oiled groups where the players actually work as a team can go wildly off the rails. In my opinion, this is a great thing because it means they feel free to make any choice, go anywhere. Tabletop roleplaying shouldn’t have the same constraints as a video game where, no matter how advanced the graphics, there are still limits to what you can accomplish and borders to the world. For those who can pay attention and analyze how such entropy molds a story there are vast lessons to be learned. For writers that are “plotters” this can be uncomfortable, even nightmarish. For “pantsers” it’s Disneyland! However, it remains a tutorial for either camp in accepting and/or mitigating rowdy characters run amok.

At the end of the day, being a role player isn’t going to guarantee success as a writer any more than an MFA, but like the MFA, it certainly can improve your skills. And, unlike a crusty professor that turns his nose up at fantasy fiction as a genre, gaming might just encourage you to write a book about a close-knit gang of hard-fighting, foul-mouthed, boar-riding half-orcs. For example.

Jonathan French is the author of The Grey Bastards, published by Crown. He lives in Atlanta with his wife and son. He is a devoted reader of comic books, an expert thrower of oddly shaped dice, and a serial con attendee.