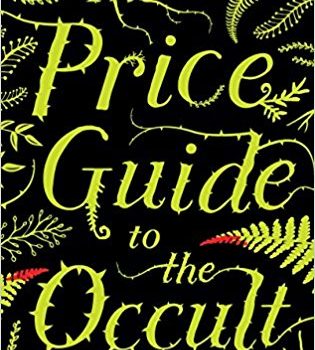 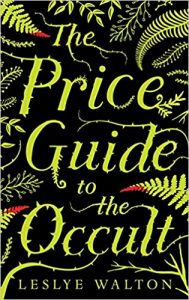 The Price Guide to the Occult begins with the story of an island in the Pacific Northwest and the small group of mostly male settlers who arrived there in the mid-1840s. In this prologue, author Leslye Walton sets up the long dark tale of the Blackburn women and the generational burdens inflicted upon them due to a curse set down by Rona Blackburn after she was deeply wronged by those early settlers. Much like the Owens women of Alice Hoffman’s Practical Magic, the Blackburn women have subsequently fit a peculiar niche on Anathema Island. In recent years that has changed a bit, with teen Nor Blackburn enjoying friendships and a happy home life with her formidable grandmother, an admired healer, and her earth mother partner. The problem is Nor’s long-gone mother, Fern Blackburn, who is bad, really really bad and in fact might be one of the most downright horrible villains in YA fantasy right now.

In case this all sounds a bit too dark, rest assured you are going to love reading every moment of how Nor deals with her monster of a mother.

Nor’s life on Anathema is, on the surface, small but safe. She has a good family, a job at the local new age/witchcraft/tour shop with a boss who has doted on her since childhood, a wonderful best friend, and predictable but cordial interactions with much of the town. There is a past problem however, hinted at early on, with cutting that stemmed at least partly from some aspect of her Blackburn heritage. Walton handles this issue with matter-of-factness, as befitting her protagonist’s straightforward character. Nor’s arms, with their old self-inflicted scars are covered, as are the scars that were inflicted upon her the last time she saw her mother. The cutting is not dismissed, however, and the reasons behind it are slowly revealed as the plot unfolds. Readers concerned about this manifestation of past trauma should be aware that The Price Guide to the Occult does not shy away from Nor’s pain or the malevolent acts behind it.

It is the return of Fern Blackburn that propels the plot, first through the publication of the book that shares its title with the novel, and then through the resultant media firestorm that sees her become a beguiling force that ensnares everyone from desperate members of the public to the president. Fern is on a mission to dominate and control everyone she has ever wanted to dominate and control, and at the center of that is Nor. Fern’s actual return to Anathema is thus inevitable; the only question is how much havoc she will wreak before she gets there, how much blood she will spill upon arrival, and whether or not Nor will be able to band together with some unexpected allies to effectively defeat her.

The Price Guide to the Occult is a classic page-turner and, despite its rather dark premise, it struck me as the perfect afternoon read. Nor is an unconventional and complex heroine; she’s prickly and complicated and not given to easily trust. The coastal island setting is outstanding, with everything from the forest to the ocean layered in deep description, and Anathema’s residents pop off the page as clearly defined and intriguing characters. It’s Fern that really takes the cake though – this is a villain like few others, and the way that Walton makes her both outrageously and believably evil is truly impressive. Dark fantasy fans take note, Leslye Walton has a story here that you will not want to miss.