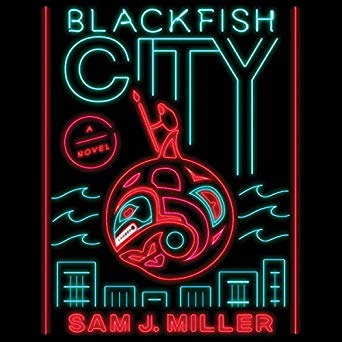 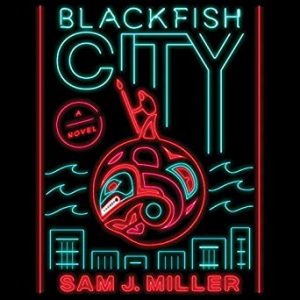 After a variety of political and environmental disasters, most of the great nations of the world are either gone or on the verge of collapse. One of the few refuges remaining is Qaanaaq, a city floating on the waters of the Arctic Circle, governed by software and controlled by a secretive group of rich shareholders. This relatively stable if not always comfortable society is threatened by a powerful crimelord aspiring to become the shareholders’ equal; a devastating sexually transmitted disease that infects each victim with the memories of previous carriers; and a woman with an orca, a polar bear, and a deadly mission.

Vikas Adam demonstrates why he was inducted into Audible’s Narrator Hall of Fame. His amazing vocal shifts bring men, women, and nonbinary people from various parts of the world to life. He also makes some interesting vocal choices with one character, Ishmael Barron, an elderly man with a nasal accent intended to indicate New York City. When an unnamed character, a narrator for a broadcast called City Without a Map, retells Barron’s first-person story, Adam drops the accent, presumably because this other fictional person might not be able to mimic Barron’s way of speaking. Later, there’s another section of the broadcast where the speaker is never identified, but Adam chooses to read it in Barron’s voice, despite there being no overt clues in the text about who the speaker is. Presumably Adam knows something that the reader of the book might not.

Because of Blackfish City‘s depiction of an environmentally damaged world and a city surrounded by rising waters, comparisons to Kim Stanley Robinson’s New York 2140 are inevitable. But while Robinson uses people’s lives to tell a global story, Miller goes in the other direction – he uses a global situation to tell a personal story. Robinson offers a cornucopia of infodumps that explain the political, economic, and cultural forces that shaped his world; Miller’s worldbuilding is only revealed in flashes. His professional experience as an advocate for the homeless is clearly expressed in the residents’ struggle for adequate housing and a decent living in Qaanaaq. But at the same time, we never learn just how software runs Qaanaaq. That’s because Miller is far more interested in the troubled family whose reunion sparks most of the action. The result is more viscerally satisfying on an emotional level, even if some of the externals are blurry.