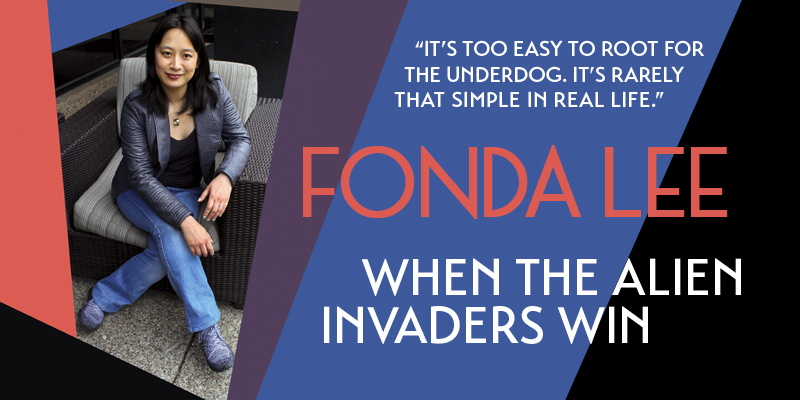 FONDA LEE was born March 10, 1979 in Calgary, Canada, where she grew up, and lived in Toronto and the San Francisco Bay Area before settling in Portland OR. Lee received an MBA from Stanford University, and worked as a management consultant and business strategist before leaving the corporate track to focus on her writing. She is also an experienced martial artist, with black belts in karate and kung fu.

“I was always a science fiction and fantasy fan. I recall reading A Wrinkle in Time, and the Chronicles of Prydain, and the Narnia series. I loved the genre from a young age. When I was a teen I got into Asimov, McCaffrey, Bradbury, and Piers Anthony. I was a voracious reader. My dad takes credit for introducing me to SF. He says when I was an infant he’d hold me on his lap in this battered yellow rocking chair, and bathe me in the glow of Star Trek original series reruns, so I must’ve been osmosing science fiction stories as a baby.

“My mom encouraged me to read tons of books. I was that kid who’d stay after school in the library and hang out and read until the library closed. I started writing for fun and always imagined it as a hobby. I didn’t know any writers, wasn’t exposed to writers, and although I told my parents I wanted to write books, I didn’t think it could be a real job.

“So I studied business and became a management consultant, and then later a corporate strategist at Nike. I had a day job going for a long time and would write for fun on the side. Writing was an escape. But I soon reached a point when I wasn’t writing anymore because I was too busy. I had this demanding job in addition to two kids who were young at the time, and I had no time left for my writing hobby.

“I realized I missed writing desperately. It was an epiphany. I didn’t love what I was doing in my day job, and I wanted to get back to what I really cared about. I resolved to finally start taking writing seriously, and decided to cut back on my day job and find a way to include writing in my life. I still feel a bit guilty for doing a bait-and-switch on my manager. I told her I needed better work life balance, and this job was not working for me, because of small kids and so on. She was very supportive and found a way for me to cut back on my hours, probably thinking I would rededicate myself to my corporate career. Instead, I took a writing course online and started working on a novel and eventually quit my day job. I worked as a freelance business consultant, which gave me enough flexibility in my schedule to pursue my new goal, which was to become a published author. I wrote a ‘practice novel,’ then a fantasy novel that didn’t sell, and then I wrote Zeroboxer, which became my debut.

“I’ve always been a long-form writer. I discovered short fiction late. At one point I was like, ‘Oh, there’s all this short fiction out there! Who woulda thunk?’ But I started out as a novelist, and sort of jumped in the deep end. I went to the Viable Paradise workshop in 2014, after I’d sold my debut but before it came out. I’d written novel manuscripts and I met all these short fiction writers at the workshop – I had no idea how to write a short story. I wrote a piece at Viable Paradise which I submitted and it sold, and I was like, ‘Wow, that was cool.’ So I wrote a few more short fiction pieces, some of which sold and some didn’t, but I always go back to novels. Most of my ideas come to me as novel ideas. It’s rare that I have an idea that I think would make a great short story. I’ll write short fiction for fun, as a palate cleanser.

“I trained in Shotokan karate for about twelve years as a teenager and in early adulthood. After moving to Portland I started training in kung fu.

“Writing Zeroboxer was a lot of fun, because it was a mashup of science fiction and sports. I was working in corporate strategy at Nike at the time, so I was surrounded by sports marketing and sports celebrity culture. I started imagining a story about an athlete in space in the far future, after humans have reached the stars and colonized other planets. The main character, Carr, finds himself becoming a symbol, a representative of not just a city or a region but an entire planet. I wanted to write about celebrity and Martian colonization and genetic engineering and prizefighting, so I combined a bunch of things, including martial arts and my day job experience into this idea. I wrote Zeroboxer in about nine months. I took it to a writing conference where I got a bunch of agent interest. I signed with Jim McCarthy, then did a round of revision and took it out on submission. It sold quickly, so from start to sale the process was about one year, which in retrospect was really fast. It was published by Flux, which is a midsize press with a pretty solid list, but they went through some ownership issues and they’re now owned by North Star editions. Zeroboxer‘s my only book with them; my next two young adult novels sold to Scholastic, and my adult fiction’s with Orbit.

“Zeroboxer fell in between YA and adult. I didn’t think too hard about what category it belonged in while I was writing it. The protagonist is a young man, and I wanted to give the story a strong sense of immediacy and action, so there was definitely a YA slant to it, but it was in some ways more adult in tone and execution. Carr is a young protagonist and has issues that come from a young-adult perspective, but he is also a prodigy, living independently and managing a career. So Zeroboxer ended up being a

“After that, I realized I needed to be more deliberate, and I’ve since been more thoughtful about asking myself, ‘Is this a YA project, or is it an adult project?’ Because my natural writing voice has often straddled that line. I love the pacing and immediacy and tightness of YA fiction. I think YA ultimately comes down to voice, and whether it’s a story written with the teen reader in mind, from a teen perspective. I realized that while I love some things about YA fiction, I also want to tackle projects that clearly fall into the adult space.

“Shortly after I wrote Zeroboxer, I was working on my second YA SF novel, because it made sense to follow up Zeroboxer with a book in that category. I also had the idea for Jade City, and that was clearly an adult story. I knew it was going to have multiple points of view, that it was about a family, that it spanned a longer period of time, and that it was a lot more complex in terms of the scope and the worldbuilding and the issues – so I was writing both a YA project and an adult project at the same time. It was funny, when Jade City came out, a number of reviews were like, ‘YA author Fonda Lee takes a turn with adult fiction.’ In my mind I had been working in both categories for some time as I’d been writing two projects. But the industry likes to put a label on you right away with your debut novel. I’m a speculative fiction writer who crosses the YA/adult divide, as opposed to a YA writer who crosses genres.

“Jade City was the most ambitious project I’d ever tried. It was moving from my previous work with one main protagonist and a straightforward linear storyline, to a cast of characters in a secondary world with a lot of intense worldbuilding. It was a level up in terms of the craft, and in many ways it felt like trying to solve a Rubik’s Cube to get the pieces to fit the way I wanted. It’s doubly true for the sequel, which I’m working on now – that’s like solving two Rubik’s Cubes at once.” 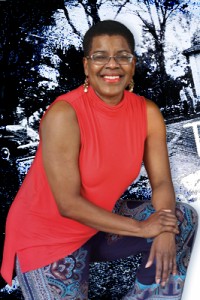 Tananarive Due: Sense of Mission