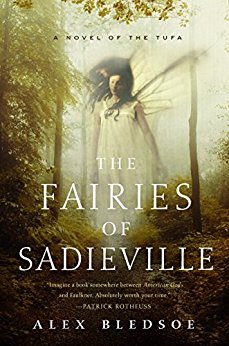 Alex Bledsoe, The Fairies of Sadieville (Tor 4/18) This is the sixth and final volume of the Tufa series, begun with The Hum and the Shiver (2011), about a hidden community of people descended from fairy folk living the modern Appalachian mountains. Film students Justin and Veronica discover a silent film that’s more than a century old, depicting a young woman transforming into a winged creature, and set off on a journey to remote Sadieville in the foothills of Tennessee, where it was filmed, to find out if it’s real.

Greg Egan, Phoresis (Subterranean Press 4/18) Egan brings his visionary brand of hard SF and worldbuild­ing to this novella of twin planets in close proximity. Only one is inhabited, but losing its ability to sus­tain life, leading its women to ambitious low-tech engineering plans to reanimate the ecosphere over generations – and to build a literal bridge between the worlds. “This is the Tower of Babel, but without the hubris and confusion: a parable not of division and failure but of the triumph of ingenuity and self­lessness – of hope.” [Russell Letson]

Justina Ireland, Dread Nation (Balzer + Bray 4/18) Politics and racism can be a bigger threat than the undead in this provocative young-adult novel set in an alternate 1880 America, where black and native children are forced to attend combat school and fight undead shamblers. Biracial teen Jane McKeen attends a prestigious school, with a chance to become a bodyguard for a wealthy white family, but ends up in a fight against powerful enemies.

Josh Malerman, Unbury Carol (Del Rey 4/18) “Sleeping Beauty” gets a thrilling, Weird Western twist when a woman secretly prone to deathlike co­mas is buried alive by her greedy husband, who hires an assassin when he learns her lost love, an infamous outlaw, is riding to the rescue.

Sam J. Miller, Blackfish City (Ecco 4/18) Miller (fresh off a Norton Award win for debut YA The Art of Starving) presents his first novel for adults, an am­bitious and exhilarating thriller set in the eight-armed artificial ocean city of Qaanaaq, where a mysterious “orcamancer” arrives riding a killer whale with a po­lar bear companion, drawing four outsiders together to save the city. “Expansive, ambitious, violent, rich in invention, and populated by a range of colorful figures… Not least among these characters is the setting itself.” [Gary K. Wolfe]

Ilana C. Myer, Fire Dance (Tor 4/18) Complex characters, a fascinating world, intrigue, and dark magics mix in this standalone sequel set years after Last Song Before Night, as Court Poet Lin leaves her homeland to help a kingdom under attack from the deadly magic of the Fire Dancers.

John Scalzi, Head On (Tor 4/18) This is a sequel to Lock In, set in a world where Haden’s syndrome inflicted total paralysis on one percent of the popula­tion, who mentally control android “threep” bodies. In the violent sport Hiketa, players control threeps who attack one another with swords and hammers, with the goal of tearing off an opponent’s head and carrying it through the goalposts. It’s all fun and games until someone dies for real, and FBI agents Chris Shane and Leslie Vann are called to investigate. “If you enjoyed Lock In, you’ll enjoy Head On even more… A page-turning whodunit within a science fiction framework.” [Adrienne Martini]

Catherynne M. Valente, Space Opera (Saga 4/18) Valente, known for her lush prose fantasy, is in full Douglas Adams-homage mode here, with a rollicking comedic work of SF about the Metagalactic Grand Prix, a Eurovision-style music competition in space, with musicians from scores of bizarre planets in man­datory competition to rock the hardest… oh, and the losing planet gets destroyed. “A great, big, pumping-heart love letter to the glam rock spirit and those who continue to keep it alive.” [Adrienne Martini]

Connie Willis, I Met a Traveler in an Antique Land (Subterranean 4/18) The latest Christmas story by the reigning queen of holiday fiction is now available in a gift-book-quality hardcover, with a cover illustration by John Foster. Anti-nostalgia blogger Jim gets lots in Manhattan and discovers “rarer than rare” bookshop Ozymandias Books… and its magical secret.

Ilana C. Myer was born Ilana Chaya Teitelbaum on January 19, 1981 in Queens NY, and moved to Israel with her family when she was 12 years old. She came back to the US to study English at Queens College in New York while working as a recep­tionist, administrative assistant, and executive assistant. She later returned to Israel, where she started a journalism career and co-founded Middle East environment blog