I’m coming off a 16-hour editing day working on a novel called The Light Brigade, which comes out next year. The editing flurry was my fault – the book was three months late. Any later, and it was going to have to push to another publishing season.

Pushing a book out is a pain to everyone involved: the publishing machine is a capitalist enterprise like any other, and a writer slipping on a deadline means a disruption to everyone else on down the line, from the editor and copyeditor, to production and sales and publicity. That’s a whole lot of people’s seasons relying on my ability to finish a book. I needed to get the thing from my head to the page. And that meant several months of intense work on top of the work I’d done the year prior. It was a fight to the finish.

In the end, it’s done. We did good work. I would not have created a novel as well structured as this one without the close attention of people outside of my own brain. The last two weeks, my assistant was up late plugging in my line edits to the second half while I re-edited the first half. My agent did yet another read recently and sent me a few continuity notes we’ll address in copy edits. It takes a village.

When I’m coming down from a big writing, editing, or book-publicity push, I try to take some time to recharge. Of course, because I’m a bit of a workaholic, I can’t even do my “recharge” activities half-assed, so I end up overdoing my recharge too. It means days and days of intense gardening, of painting, of home repairs, of cleaning, of gam­ing, of reading. I’ve bought and read a tremendous number of domestic thrillers and space adventure books on Kindle, my preferred medium for quick-hit reads that I know I’m not likely to pick up again. My garden has become something of a local tourist attraction; every year we add more, and this year is no exception. It also turns out that the more plots you create, the more you have to weed, mulch, and otherwise maintain.

My creative pursuits have always been about building and creating some­thing beautiful, about transforming a vision in my mind into something tangible that others can see. Fiction is like that. Painting. Gardening. I remember plotting out how our yard would look when we first bought our house eight years ago. We had acquired three dead city lots, one of which had recently been a parking lot. Another that had a house on it bulldozed. All were covered in nothing but dandelions and brown grass.

But I knew what we could do to those lots. I mapped out where the fence would be. Marked the corner lot setbacks. My spouse and I planted five trees the first year. Put in the garden beds in year two. Eight more trees came in year five. We put in a patio in year six. The fence, finally, arrived in year seven. Now my spouse is laying the stone paths to the patio. Extending the front landscaping.

What all of this work has taught me are lessons I sorely need repeated: the importance of planning, goal setting, and patience. We want everything all at once in our culture. We want our first book to sell millions. We want our first job to lead us to greatness. We want everything now, immediately. To have to wait, to toil for it, can make us frustrated. But the truth is that there are so many things we simply won’t ever achieve unless we strive to complete them a piece at a time, like this garden. If, standing in the middle of those lots, I thought about all the time and money it would take and just gave up, I would never be standing in this garden, amazed to have taken a vision from my head and made it into a tangible thing.

And so it is with writing a difficult book. The toil can be frustrating and intense. There are times when you feel alone and disheartened. You feel you’ll die before you finish.

It’s the ability to envision something that doesn’t exist, that, perhaps, makes us believe in the act of creation. I’ve learned that the trick of seeing past what is to what may be isn’t necessarily a trait shared by everyone. Watching a few episodes of House Hunters will demonstrate that effectively. Imagination is a skill that must be honed and sharpened like any other. I’ve found myself leaning hard on my imagination more recently, trying to imagine my way out of a future that seems increasingly bleak.

If my life thus far has taught me anything, it’s that yes, you can achieve the things you can imagine. But it’s not fast. It’s not easy. No one gives you cookies. It’s tough. You want to quit. It costs you other opportuni­ties. All of these things, though, from the books, to the gardens, to the governments, can be changed. Some faster than others.

I cling to this knowledge of the power of imagination. It gets me through the tough days. The days where it feels like I’m hitting my head against a wall that will not break. It reminds me that all walls have cracks. All walls were made by human hands.

I think about this on long, sultry evenings here in my urban homestead in Ohio, drinking beer and outlining another books, gazing out at the bright green grass teeming with birds and the tall trees – all of this that was once a paved parking lot – and I remind myself that change is not only possible, but inevitable.

We can make something new, but only if we can imagine it. It is this that I feel is often stripped from us first – as citizens, as workers, as artists – this idea of “plausibility” and “realism” and the blowback when we dare to think outside the status quo. When we dare to believe things can be really different. But it’s in this daring that true change will happen. Imagine it. Create it.

I have learned patience, over this last eight years of a novel career, while I tended these blasted garden lots. In many ways, their journeys are similar. I’m creating something from nothing but thought. I’m building the life, the world I imagine, bit by bit, bushel by bushel, word by word. After eight years of this, I’ve looked up to find I have created whole worlds, beloved characters, and this, yes, this – the corner lot in the city, the lot full of trees and garden paths and happy dogs and lilacs that enchant passersby with their fragrance.

This is what is possible. This is what we can achieve. If only we believe in it, and in our ability to see it become a reality. We put in the work.

They say that a small, dedicated group of folks can’t change anything. But the truth is, they are the only thing that ever really did.

I’m proud to be one of those folks, even if it’s just in my own small, secret way, with words and futures and green grass and trees that reach for the stars. My garden, and my work, will outlast me. Maybe the future I dream of will, too. 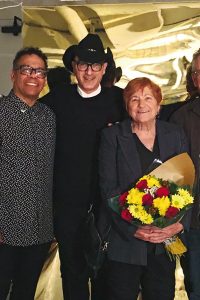 Photo Story: Finch for the Stage 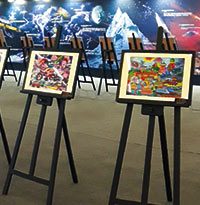