Oathbringer by Brandon Sanderson remained on the top of the hard­cover list, followed by Andy Weir’s Artemis in second. There were no new runners-up. We had 52 nominated titles, up from 47 last month.

Readers remembered Ursula K. Le Guin by purchasing The Left Hand of Darkness, which took the top spot on our paperback list with a respectable margin over Silence Fallen by Patricia Briggs (book #10 in the Mercy Thompson series). The new runner-up was Changing Planes by Ursula K. Le Guin (Ace). There were 58 titles nominated, up from last month’s 55.

After five months at the top of the trade paperback list, N.K. Jemisin’s The Fifth Season was finally dethroned by Jeff VanderMeer’s Annihila­tion, which claimed first place, followed by Cast in Deception by Michelle Sagara. There were no new runners-up. We had 77 titles nominated, up from 74 last month.

Star Wars: Thrawn by Timothy Zahn returned to the top of the media and gaming related books list with a respectable lead over the second place finisher Star Wars: Darth Plagueis by James Luceno. There were no new runners-up. We had 20 titles nominated, down from last month’s 28.

From the May 2018 issue of Locus Magazine 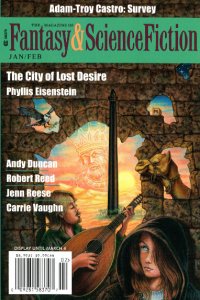 “We’re living in a time of walls,” said filmmaker Alex Rivera when introducing Sleep Dealer at the start of the 43rd Williamson Lectureship April 4-6, 2019 in Portales NM. “It’s a global obsession. How do we tell stories in such a world? In my film, I try to cross the consciousness of walls by looking at them, through them, and beyond them.” Trans-border fantasies and nightmares were timely subjects for