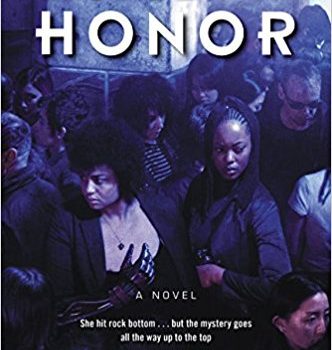 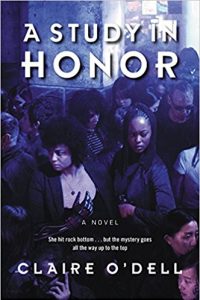 Speaking of good, let’s talk about Claire O’Dell’s A Study in Honor. O’Dell is an open pseudonym for Beth Bernobich (The Queen’s Hunt, The Time Roads) and this marks the author’s first novel-length foray into science fiction. And damn, what a novel it is. A Study in Honor is a near-future take on Sherlock Holmes and Dr. Watson, set in an America in the grip of a second civil war.

Dr. Janet Watson lost her arm and her career to a sniper’s bullet while treating soldiers on the changing battlefields of the new civil war. The prosthetic that replaced her original arm – a stop­gap replacement – is only a semifunctional piece of machinery, nothing near the top-of-the-line model she’d need to return to her career as a sur­geon. The Veteran’s Administration (understaffed and underfunded) is unwilling to admit she could be entitled to a better arm, and Watson – home­less in Washington D.C, jobless, running out of savings, and on the edge of despair – finds herself disinclined to look a gift horse in the mouth when it comes bearing the offer of really nice shared accommodation.

Said gift horse is Sara Holmes, arrogant, mys­terious, playful, and compassionate by turns. At first Holmes’s life and job are opaque to Watson, and she comes to realise this is intentional on Holmes’s part – and to suspect Holmes’s motives. But when Watson, now working in a job far be­neath her skills as a medical technician at the V.A., tries to find out why a patient died when there was no apparent reason for that death, it’s Holmes who rescues Watson from a seemingly-random attempt on her life after work, and Holmes who offers Watson both protection and a challenge.

Holmes is a government agent – a brilliant and independent one, with a full measure of confidence in her own judgment where it con­flicts with that of her handlers or supervisors. And Holmes believes that there’s a conspiracy afoot in Washington and the V.A.: a conspiracy that may have implications for the current, and strongly contested, presidential election, and one that may reach all the way to the battlefields of the civil war and perhaps across it.

Holmes’s superiors are unconvinced, but Holmes is hard to deter, and Watson is, herself, invested in justice, truth, and ethical medicine. Together, it turns out, they make a very good team.

There’ve been many takes on (and updates of) Arthur Conan Doyle’s most famous creation. Some of them remain faithful to the time and place of the originals; some of them don’t. Some of them bend the genders of the characters (I’m thinking of Aliette de Bodard’s definitely Holmes-ian The Tea Master and the Detective) and some of them take some strong liberties with the social and political contexts of the original Holmes and Watson, and/or with the relationship between the two of them. Until O’Dell’s A Study in Honor, though, I’d never read a version of Holmes and Watson where both parties were women of colour, and queer. It gives Holmes’s confidence – the confidence that borders on arrogance – an entirely different inflection: it gives her characterisation that much more of an edge, in a not-that-far-future America. And it makes Watson that much more interesting a Watson, in this social context, where because of racism, she has more factors to consider in weighing risks and benefits of her decisions, and in negotiating the world.

It’s also enormously rare that one encounters a good book where both main characters are women who love women, but where romance or attraction between them is never hinted at. (Holmes, while well-meaning, is sufficiently bad at respecting boundaries when she thinks she knows best, that one feels an intimate relationship with her would be… challenging.) Holmes and Watson are room­mates who respect each other, a respect that builds into a burgeoning friendship. Their characters are well-drawn, solid, recognisably based on Doyle’s originals while being their own things, too, and Watson’s first-person voice provides effortlessly gripping narration.

The pace is a little uneven, especially near the beginning, but once it ramps up, it becomes a tight and deeply compelling thriller, with twists and turns and a mystery at its base. O’Dell’s prose is sharp and clean, rising at times to the poetic, and her near-future Washington DC feels like a real city. The USA of A Study in Honor is a place with deep political divisions, and some of that comes into play in this story. It feels appropriately complicated as a future, and not a simplistic future vision of now.

As you might be able to tell, I really enjoyed A Study in Honor. It fits neatly on my shelf alongside The Tea Master and the Detective – though I don’t know of many other future Holmes and Watson stories that are as satisfyingly good. I hope to see sequels from O’Dell, because this is a mystery-thriller partnership that seems designed to make me happy. Lots and lots of sequels. 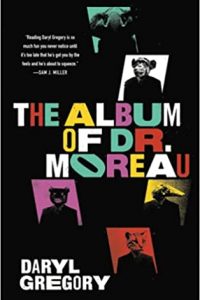