FAA inaugurated the SF New Year Gala in 2016, in order to create an annual event of publishing in­teresting, original SF short stories over the Chinese New Year holiday. In the first gala, 13 established and new Chinese SF writers, including Hugo Award winning Liu Cixin and Hao Jingfang, were invited to collaborate in writing a round-robin story titled “Eyes at the End of the Universe”, about an alien explorer observing the festivals on Earth. In 2017, 23 writers took part in the second gala. Each writer wrote a short story with a title of a program selected from CCTV’s Spring Festival Galas, an integral event of Chinese New Year celebrations, over the last three decades, and made tributes to the original performance.

In this year’s gala, each invited writer was asked to write a short story (about 4,000 Chinese characters, about 2,500 words) within 48 hours on the topic of “in the Beijing West Railway Station (BWRS) when the Chinese New Year is approaching.” BWRS is a major railway terminal in Beijing for both traditional and high-speed trains, serving on average 150,000-180,000 passengers per day with a peak of 250,000 people per day during the annual Spring Festival Travel Rush. Writers are free to choose when or where the story takes place, as long as they keep three things in their stories: the name of the station, its function as a major public transportation interchange, and the fact that there will be a huge amount of passengers within a specific time period.

Eighteen writers and three artists were invited to participate. Chinese participants included well-known writers like Han Song (“Two Small Birds”; “Security Check”), Chen Qiufan/Stanley Chan (“The Fish of Lijiang”; “Year of the Rat”), and Yang Ping (“Wizard World”), as well as up-and-coming writers like Hao He and Teng Ye. The artists were BUTU (illustrator), Yaki (cartoonist) and Xu Xiaodong (cartoonist). For the first time, three foreign writers were invited to contribute to the project: Kim Bo-young (“An Evolutionary Myth”) from Korea, and Ken Liu and Alex Shvartsman from the US.

Within only 48 hours and under the rules set by FAA, writers creatively offered readers 21 fasci­nating imaginative worlds and narrated engaging stories about our fear, wonder, hope, and most importantly, love in these worlds.

In Han Song’s gloomy and Kafkaesque story, “Beijing West Railway Station, before Chinese New Year”, the ever-growing BWRS evolved into a living, self-conscious creature where passengers were often lost in it. Consistent with the typical style of Han Song, this story was the most-voted and most-viewed piece among all gala stories. The grotesque creature named BWRS must have haunted many over the supposedly peaceful and auspicious days.

Another well-reviewed, heart-warming story was written by Liu Yang, a young scholar in Condensed Matter Physics, in which BWRS was a interchange for time-traveling passengers and some unexpected accident occurred when Grandpa who passed away five years ago in the present timeline tried to time-travel from a parallel timeline for the first time to meet with his beloved wife.

Unsurprisingly, family reunion became a recurring theme that resonated powerfully with Chinese read­ers in such a special holiday season, also reflected in Alex Shvartsman’s story, “Repairs at the Beijing West Space Elevator”. Even if Shvartsman hadn’t visited BWRS before, he understood what it meant to millions of Chinese passengers who were desper­ate to return home before the New Year. The story was about an urgent repair task at the busiest space elevator station where thousands of settlers in other planets of Solar System were anxiously waiting to be transported back onto earth before Chinese New Year Eve.

Ken Liu took on a much bigger scale in his story, “Cosmic Spring”, where “winter” was coming for the old universe and entities originating from the earth gathered around for the re-birth of the new universe. Here BWRS was like a symbol of home, where all travelers tried to return at the end of the day. The grand image and poetic narrative was much loved by Chinese readers, who voted the story to the second place. The original version was just published in Lightspeed.

One of the three artists who took up the challenge was professional cartoonist Xu Xiaodong. Inspired by his 11-year-old daughter, he drew the illustration of BWRS using the style of Minecraft. The artwork, “Stargate”, showed how future BWRS and Beijing may look in the eyes of interstellar passengers.

Aside from FAA’s own Non-Exist Daily, SF gala stories were published on major new-media plat­forms, such as Guokr, The Paper, Tecent Culture, iReader, Douban, and Toutiao, reaching the widest array of readers. As of March 31, the total page views was 9.2 million. In addition, gala stories were pro­duced into audio format and broadcast on Himalaya FM, the largest audio platform in China. The total number of plays reached 340,000, with more than 1,500 comments.

To FAA’s excitement, many readers, hard-core or occasional, actively played a role in the event, making it a two-way interaction between both ends of storytelling. Besides tens of thousands of instant comments and reviews by the readers, a few hundred of them voted for their favorite gala stories and artworks, and another 70 went to the trouble to submit their own stories to the “One-sentence SF Gala Story Contest.”

“It is an opportunity for communication and growth.” Ji Shaoting, founder of FAA, concluded after the gala with great satisfaction, “This (event) helps science fiction community and business, which used to be linear and flat, develop into a multi-dimensional status by tremendously attract­ing interests from more audience, professionals and even investors.”

On March 31, 2018, a writer’s workshop was held in Beijing to follow up the gala. Attendees included gala writers (i.e. Han Song, Yang Ping, Ling Chen, Liang Qingsan, Teng Ye, Hao He, Zhao Lei, and Shuang Chimu) and graduates of FAA’s SF writing workshops. Writers first discussed their ideas behind the gala stories and the feeling of the event.

Han Song was very excited to participate in this year’s SF Gala. “The sense of SF came back to me on this platform,” he commented. “It’s a sense of equality in front of science and imagination and a sense of equality to participate and learn from others. I rediscover the pleasure of writing SF in interacting with fellow young writers and readers.” Yang Ping agreed with him and described the process of writing the Gala story as “returning to the moment when I was first moved by SF.”

Writers further debated about what SF meant to them and what SF writing “should” be practiced in the context of modern China. As we all know, consensus would never be reached for these kind of questions among SF writers and readers. Nevertheless, attendees enjoyed the intellectual interactions and – more importantly – delicious afternoon teas. A few innovative ideas were brain­stormed for FAA to organize next year’s SF Gala.

Arguably, SF New Year Gala is the most eye-catching and valuable SF-related event in China, What it bringing not just a few interesting SF stories or artworks, but also encouraging the creative SF writing, coveying SF ideas to a large audience, and bridging SF and other professions and industries. Or in short, as Ji Shaoting said, it “refuels the industry of imagination.” 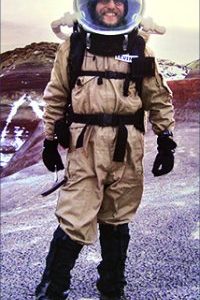