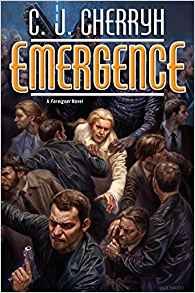 C. J. Cherryh’s Foreigner metanovel or roman fleuve has been in operation for  more than two decades, spinning a continuous narrative line over (so far) nineteen entries detailing the delicate and often difficult relations between a population of lost human star travelers and their not-as-human-as-they-look alien hosts, the atevi. This series is also a kind of career-tracer, following the expanding and increasingly activist role of Bren Cameron from paihdi—human-atevi translator and neutral intermediary and facilitator—to troubleshooter on matters of technology and space travel; negotiator with the unexpected alien neighbors, the kyo; and human role model and mentor to Cajeiri, the young atevi heir apparent.

Emergence picks up right where Convergence left off. Cameron is still on the human-inhabited island of Mospheira, now functioning less as paihdi than as representative of the leader of the dominant atevi governing group. He has been trying to get the rather inward-turned human community to understand its new environment: an interstellar neighborhood now known to be shared with the very powerful kyo, who in turn need to be shown a planet with two species living in peace. In addition, he is managing the logisti­cal, political, economic, and cultural challenges of resettling a second wave of displaced humans on Mospheira, starting with group of young people who have gained special importance to the atevi government through their connection with Cajeiri.

Also carried across from Convergence is the continuing practical-political education of Cajeiri, as a visit to his great-uncle’s estate turns into a se­ries of crises with roots in long-running conspira­cies, family feuds, clan rivalries, and the leftovers from the Troubles that temporarily overturned the government and nearly killed his parents. What started out as a kind of public-relations junket and reconnect-with-his-roots project has turned into a live-ammo crash course in atevi politics, where regional and wider associations are driven by family and clan connections and loyalties (lines of man’chi, to use the atevi word), and decisions about leadership turn on matters of character, force of personality, analytical intelligence, and gut reaction.

Cajeiri is not quite Prince Hal, and the Troubles aren’t quite the Wars of the Roses, but he is grow­ing up in an environment of contending alliances and dynastic tensions and he clearly needs to learn how to think and act like an aiji – an atevi lord. His growing understanding of his role as a leader parallels his determination to learn how to manage mechieta, the dangerous, competitive horse-analogues his great-uncle raises, and there are clear reflections of how his lessons there will fit in with the rest of his education as a leader. His side of the story is the more dramatic, featur­ing a brief attack on the estate and some careful probing of the motives and associates of a cousin who presents himself as possible ally and mender of old clan tensions. It also carries a strong emotional punch even across species boundaries, as we watch an alien psychological process, the coming-into-focus of analytical intelligence and understanding of man’chi in a young aristocrat.

On Mospheira, Bren is also laying the foundations for future management of the human-atevi (and now possibly -kyo) relationship, especially in choosing tutors for Cajeiri’s young human associates – kids raised in the confines of a space station and some­what familiar with atevi, who now need to learn how to be Mospheirans, just as Cajeiri needs to learn how to be fully atevi after his very unconventional formative experiences among humans and kyo. It’s also hard not to see in the Mospheira side of the story parallels with contemporary situations, as Bren ad­dresses popular anxieties about an influx of refugees and the opposition of reactionary political-economic factions driven by ancient resentments, conspiracy theories, and garden-variety human chauvinism.

The two plots do not converge, but parallel each other in action and motif: re-establishing broken relationships, overcoming old feuds and grudges and disagreements, building on familial ties – and the climactic scenes on both sides are of social ritu­als with political consequences, knitting together the tears and strains of history. The change in title conventions begun with Convergence – from -er and -or to -ence nouns – suggests a shift in emphasis. The actions of Bren Cameron and now Cajeiri remain at the heart of the story lines, but these two do not act alone or deal only with immediate problems. Both operate within systems of alliance and cooperation (and competition), and Cajeiri especially is gaining an understanding of the historical, organizational, and dynastic contexts of the problems he faces – of the long game. This installment opens the series to even wider possibilities – and, without doubt, trickier traps for the unwary, imprudent, and ill-prepared inside the books, and much pleasure for those of us outside them. 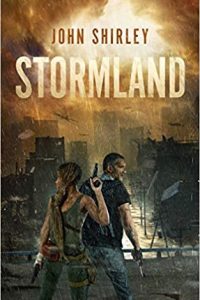