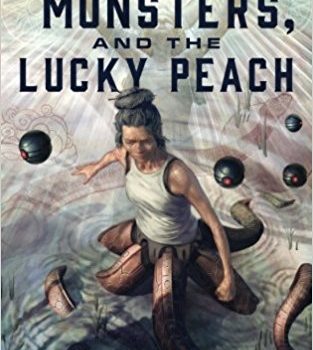 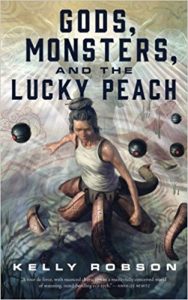 Gods, Monsters, and the Lucky Peach by Kelly Robson is cunningly structured, a sly sleight of hand that sees two parallel stories told simultaneously. One of these stories is entirely linear, as befits a time-travel narrative. The other story… is not.

In Mesopotamia, in or around 2024 BCE, the king Shulgi finds his people and his kingdom beset by odd signs and omens, including strange-shaped demons who kill some of his people. The priestess of the moon, Susa, believes that the signs mean the gods desire Shulgi’s death. Every chapter begins with a paragraph or three from Shulgi’s perspective, and it becomes clear that he’s a clever and honest man doing a difficult job in overwhelming circumstances.

The other strand of the story starts in 2267. Minh’s a plague baby, part of the generation that first moved back up to the Earth’s surface from the underground hells in order to reclaim humanity’s ancestral habitat. She’s spent her life restoring river ecosystems, but funding for long-term projects has been slim since the discovery of time travel. An opportunity arises to take a team to survey the Tigris and Euphrates rivers in 2000 BCE, and Minh is determined to win the bid and do the best damn job possible. So is her administrative assistant, Kiki, a young woman from the younger generation, the “fat babies,” who desperately wants meaningful work. She wants to do something that matters. Hamid, of Minh’s generation and one of her colleagues, just wants to do his job while indulging his obsession with horses.

Time-travel, according to TERN, the secretive agency that controls the time-travel technology, cannot change the present. The past that they visit, according to TERN’s physicists, is a closed loop that collapses once time travellers leave: it has no lasting existence apart from the time-travellers, so it’s barely real. It – and its inhabit­ants – don’t matter. Things – and people – can be brought from the past into the present from which the time-travellers left, but not from the present into the future. The health-and-safety and time-travel specialist assigned to Minh’s team, Fabian, treats the inhabitants of the past as disposable, because, to him, they are.

Gods, Monsters, and the Lucky Peach comes alive in the details. In Minh’s passion for restoration and for ecosystems and her distress at coming face-to-face with violent death; in her bafflement at and affection for Kiki, and her growing realisation – prompted by conversa­tions with Kiki – that her generation has failed Kiki’s in letting the banks dominate the deci­sions they make. This is a world where private banks control what gets done, and where debt is a seldom-mentioned presence, but is constantly in the background in the ways in which communi­ties, individuals, and small groups interact, and a world in which amazing advances in medical science haven’t solved the problem of chronic illness. There are cool drones and amazing science-fictional biological advances. Minh has six lower limbs, all tentacles like an octopus; in order to make sure she can have a place on the team, due to volume constraints, Kiki has her own original legs removed and replaced with goat-footed prosthetics.

This is a world in which the differing moral imperatives of Kiki and Fabian lead to the team learning that it’s not just the inhabitants of the past that are disposable. The novella concludes with an open-ended moment, one that raises more questions than it answers, but Robson’s sly, deft storytelling has already left us all the hints we need to see the questions she’s really offering for us to answer: what do we owe to past generations, to future ones, and to each other? And what do we owe the world? 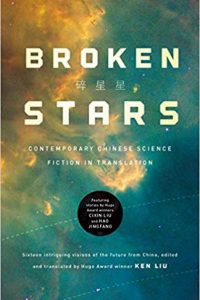