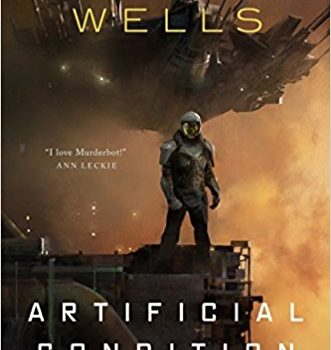 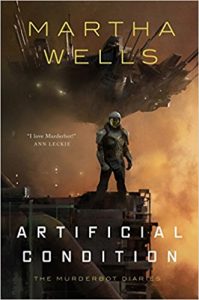 It’s always a treat to read a Martha Wells story, and it turns out that her Murderbot Diaries are an especial delight. Last year’s All Systems Red introduced readers to the self-described “murderbot,” a sentient construct (part machine, part organic, apparently human in form) Security Unit (“SecUnit”) owned by a corporation and assigned to protect humans and/or property as needed. Murderbot isn’t your average SecUnit, though: they’ve successfully hacked the soft­ware governor that would otherwise compel them to follow human or corporate orders, and as of the beginning of All Systems Red, they were grumpily following orders to minimise the risk of discovery, while spending as much time as possible watching popular entertainments. Murderbot doesn’t like humans very much – in­teracting with them is stressful and they have so many prejudices about SecUnits – but humans make entertaining art. (Murderbot never puts it in these terms, but it’s pretty clear they have deep social anxiety and immense awkwardness about actually talking to people.)

The end of All Systems Red sees them on the run. This is where Artificial Condition opens, with Murderbot in transit, with a plan to find the answer to an important question: did they originally go rogue and cause a massacre? Or did they hack their governor and become a “rogue” SecUnit (albeit one whose major element of rogu­ery is watching human-made entertainments) so that they could avoid being involved in massacres in the future? They don’t remember, so they’re trying to get to the mining facility where the massacre originally happened.

The ship Murderbot asks for a lift turns out to be a lot more sophisticated than they expected. ART (dubbed by Murderbot “Asshole Research Transport”) could squash Murderbot as easily as Murderbot could squash a beetle. ART doesn’t. Instead, Murderbot learns to feel a little more comfortable around the transport, over ART’s reactions to entertainment shows, and ART, in turn, pushes Murderbot to think more deeply about what’s involved in passing for human – which Murderbot will have to do in order to successfully carry out their investigation. ART gives Murderbot the tools to pass as a human, and pushes Murderbot to take a job with humans as a security consultant in order to gain access to the location of the earlier massacre.

“Security Consultant Eden” (Murderbot) tries to keep a trio of youthful humans alive while they negotiate with an unscrupulous boss for the return of their research, while also investigating Murderbot’s past – and trying not to be outed as a rogue SecUnit. Artificial Condition is a story that balances its disparate elements with exceptional skill. It’s perfectly paced, and Wells brings both a strong sense of humour and deep pathos to Murderbot’s character and to their voice. Murderbot, for all their insistence that they’re not really a person, is a very human sort of bot.

There’s plenty of cool shit in this space operatic future, and Wells makes excellent use of the varied potential of her setting for different sorts of stories. Where All Systems Red had a background feel of planetary adventure, and Artificial Condition feels like noir, Rogue Protocol, the third volume in the series, hits the “haunted space station” end of the spectrum.

Corporation GrayCris, whose machinations Murderbot encountered during the course of All Systems Red, and which got some of the humans Murderbot was protecting killed, owns an aban­doned terraforming platform on the edge of the Corporation Rim. Murderbot thinks that “terrafor­ming” was a cover for illegal extraction of remnant alien synthetics and materials. Murderbot wants to find proof of this, in part to protect a human they rather like, one Dr. Mensah, and in part because a scandal of this magnitude would certainly distract everyone from paying attention to the fact that one SecUnit has gone missing from inventory, and is wandering around without any human oversight.

A salvage team is heading out from a station in that part of space to assess the terraforming platform, which has been bought from its former owners, and recover it from its slow slide towards atmospheric destruction. Murderbot stows away to go along, but they’re discovered by the childlike robot Miki – a robot whose owner, Don Abene, has only ever been good to them and treated them like a friend – and forced to masquerade first as an augmented human security consultant, “Secu­rity Consultant Rin,” and later, when things have escalated and Murderbot needs to actually show themself to the humans, as “Security Consultant Rin’s SecUnit.” Murderbot is baffled by Miki, and faintly resentful – a robot who’s never had to so much as think of distrusting humans? How bizarre! – but they don’t have a lot of time to dwell on the unfairness of life (although they dwell on it anyway).

The terraforming platform is trapped. GrayCris doesn’t want anyone uncovering what they did there, and Murderbot is, once again, in the position of having to protect soft, squishy humans who don’t really understand what they’re up against.

Wells’s work is always atmospheric. Rogue Protocol is particularly so, an eerie evocation of an abandoned terraforming platform filled unex­pectedly with shocking dangers, but the real joy of these novellas is Murderbot’s grumpy, reluctant interaction with other people: Murderbot’s sense of responsibility and, though Murderbot denies it, their conscience, compels them to take care of people, and they react with strong emotion when they fail.

Artificial Condition and Rogue Protocol are tight, tense, entertaining adventure stories that nonetheless have quite a lot to say about ethics, power, and personhood. I recommend them whole­heartedly, and I really hope that Wells chooses to write many more.

*Murderbot consistently refers to themself as “it,” but I’m sufficiently uncomfortable with us­ing object-pronouns for people that I can’t bring myself to do the same. I know this is inconsistent with the basic standard politeness of using people’s self-chosen pronouns. It’s a dilemma.