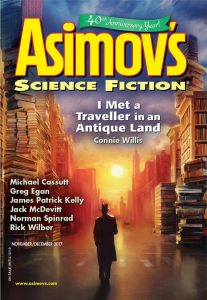 With 2018 looming on the horizon, only a few days away as I write these words, let’s do some mop-up of things I haven’t covered yet.

Last month we discussed futurology/Think Tank anthologies. The strongest of this grouping snuck in under the wire, just in time to be still eli­gible for consideration among 2017’s anthologies: Visions, Vectors, Escape Velocities: A Collec­tion of Space Futures, edited by Ed Finn & Joey Eschrich. Sponsored by the National Aeronautics and Space Administration, this is a mixed fiction/non-fiction anthology dealing with the near-future prospects for space travel and the eventual colo­nization of other worlds in the Solar System. The essays are beyond my purview here (although they look interesting), but the fiction part of the anthology is quite strong, including a few of the best stories of the year. The best are “Vanguard 2.0” by Carter Scholz, dealing with the moral choices faced by an astronaut who discovers intrigue and political machinations at a space station in Near-Earth orbit; “Death on Mars” by Madeline Ashby, in which astronauts on a mission to Mars learn that while you sometimes have to keep secrets, there’s always a price to pay for keeping them; and “Night Shift” by Eileen Gunn, in which a programmer must struggle to control the increasingly erratic behavior of an AI overseeing the manufacturing of Von Neumann-machine mining robots on an asteroid. There are also superior stories here by Karl Schroeder, Steven Barnes, Ramez Nam, and Vandana Singh.

After a so-so year, Lightspeed closes out 2017 with a weakish December issue. Best story here is “A Third of the Stars of Heaven” by Cadwell Turnbull, about a woman who refuses to be cured by modern medicine provided by sophisticated alien medical technology. It’s well-written and nicely characterized, but gains little from not be­ing a mainstream story about a Christian Scientist facing the same crisis of conscience instead. Asimov’s caps a strong year with a strong November/December issue. Best stories here are “The Discrete Charm of the Turing Machine” by Greg Egan, in which a programmer learns the sinister secret behind the tide of automation that’s putting almost all hu­mans out of work; “And No Torment Shall Touch Them” by James Patrick Kelly, in which a dead man whose consciousness has been downloaded and manifested as a hologram projection must struggle to prove the continuity of identity with his former organic self; and “In Dublin, Fair City” by Rick Wilber, another of Wilber’s alternate-history tales about the adventures of Moe Berg, professional baseball player turned spy in an Alternate WWII. This one concerns efforts to smuggle Werner Heisenberg and the secret of the atomic bomb out of an occupied Ireland. Also good in November/December are “Afloat Above a Floor of Stars” by Tom Purdom, which takes a couple of quarreling, politically divided astronauts further into space than anyone has ever gone before; “Confessions of a Con Girl” by Nick Wolven, about a student who falls afoul of a system which constantly evaluates what the people around you think of you; and Connie Willis‘s reimagining of the little magic shop story, “I Met a Traveller in an Antique Land“.

2017 was a particularly strong year for Analog, and they end the year with a good November/December issue. Best stories here are “Reentry” by Brendan DuBois, in which an astronaut returned to Earth after a mining accident on an asteroid gets a far dif­ferent greeting than the one he expected to receive; “Two Hours At Frontier” by Sean McMullen, in which the crew of a spaceship en route to investigate a mysterious artifact at the outer edge of the solar system wakes from hibernation to find themselves transformed and faced with mysteries to be solved; “Hybrid, Blue by Firelight” by Bill Johnson, another in Johnson’s series of stories about a man lost in time struggling to restore the obliterated timeline he came from; and “Native Things” by Catherine Wells, which takes us to a devastated, post-apocalyptic America for the first meeting in a generation between two separate groups of survivors, who must now try to find ways to live with each other. There are also good stories by Bud Sparhawk, Jay O’Connell, Scott Edelman, Ian Creasey, Tom Jolly, and others.

After an exceptional September/October issue, its best issue of the year, F&SF ends 2017 with a disap­pointing November/December issue. Best work here is by the Old Pros, veteran authors Kate Wilhelm and Larry Niven. In “Attachments“, Wilhelm gives us some very good reasons why you should stay away from haunted castles, and in “By the Red Giant’s Light“, Niven takes us to Pluto in the last days of the solar system, when the swollen Sun is in the process of swallowing Venus, for the story of how Pluto’s sole human resident must find a way to work with an alien robot to keep a massive comet from destroying the planet. 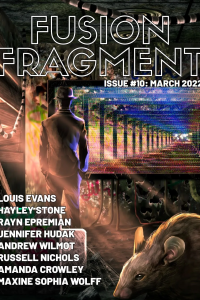 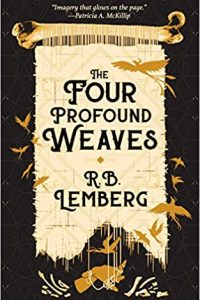