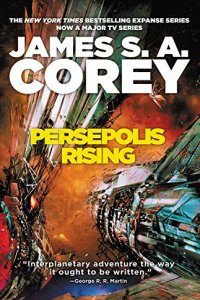 Cover blurbs and media PR keep referring to James S.A. Corey’s Expanse series as space opera, which has always struck me as an inadequate descriptor for a set of nov­els that employs an unusually, um, expansive set of science-fictional tropes. (The television adaptations on Syfy are a bit biased toward space-adventure and -combat, though they have only gotten through the first two novels so far.) Right from the start, Leviathan Wakes (2011) alternated space-adventure and future-noir-detective plot-threads, to which were eventually added generous dollops of other SF subgenres: military, political-intrigue thriller, ancient-alien-technology encounter, planetary exploration and pioneering, global disaster, post-apocalyptic survival, mysteries-of-deep-galactic-history…. Like Larry Niven’s Known Space, Allan Steele’s Near Space, or Paul McAuley’s Quiet War solar system, the Expanse is a future-historical world designed to accommodate a range of story types.

The seventh entry, Persepolis Rising, is no exception, though I’ll save the newest subgenre for later. The first thing to be noted is that this book jumps over three decades in which everyone has struggled to recover from the destruction and disorder of the aptly titled Nemesis Games (2015) and Babylon’s Ashes (2016). During this period, the solar system has stabilized: Earth’s UN and Mars have made peace and joined their armed forces into a Coalition Navy, and the old Outer Planets Alliance’s Transport Union has become a major player, with all-but-governmental power over interstellar trade. When the ancient-alien pro­tomolocule opened gateways to more than 1,300 habitable (and, millions of years ago, inhabited) planets scattered across our neck of the galaxy, there was a rush of emigrants eager to occupy the new real estate. The resulting, mostly struggling extrasolar settlements have formed an Associa­tion of Worlds that lacks political clout, thanks partly to the Union’s control of traffic through the wormhole gates.

The chaos of the exodus obscured the abscond­ing of an entire arm of the Martian navy, led by a brilliant, visionary admiral who saw opportunity in some abandoned alien high tech out in the Laconia system, and who also had the wit to steal a chunk of protomolecule to play with. Between those resources and Martian military/colonial culture, High Consul Winston Duarte (as he mod­estly styles himself) has forged a tidily totalitarian regime and a near-invulnerable fleet, and now he sends a couple of his new mighty warships back to the home system with an offer-they-can’t-refuse: to join his new pan-human interstellar empire. De­spite Duarte’s high-minded, euphemistic rhetoric, the invitation is backed by a fatal or-else, and he intends to absorb not only the home solar sys­tem but the colonies – in fact, all of humankind, anywhere – into an empire headed by Laconia. That means headed by Duarte, since he intends, with the help of the protomolecule, to become immortal.

During that same 30 years, the aging but still able crew of the equally aging gunship Rocinante has been working for hire, but Captain James Holden and second-in-command Naomi Nagata have finally decided it’s time to retire from freelance troubleshooting and turn the ship over to the rest of the crew, under the leadership of former Martian Marine Bobbie Draper. Their latest (and quite unsatisfied) employer has been Transport Union President Drummond, at heart a Belter more comfortable in her lover and partner Saba’s ship than in the enormous spacecraft/habitat People’s Home, from which she administers the Union in a boring round of briefings, meetings, and negotiations.

Holden’s retirement and transition plans are put on hold and Drummond’s administrative chores get anything but boring when the Laconians show up at the gate-controlling Medina Station, where both Saba and the Rocinante contingent are caught in the invaders’ takeover. With their ships locked down, they are left to either twiddle their thumbs or get into trouble. No question about how that’s going to come out.

Captain Santiago Singh of the Laconian Navy has been given the governorship of Medina Station, and he isn’t much more comfortable with leadership than Drummond is, though for different reasons. He finds himself managing not a peaceful transition with a few unavoidable bumps, but an increasingly violent and effective round of foot-dragging, non-compliance, and sabotage carried out by some of the station’s bolshier inhabitants. He himself is under the gun, expected to produce results, or else. All of which brings us to this volume’s embedded subgenre: a science-fictional recapitulation of the resistance-against-the-occupation drama. (This is the second such in two months – see Ken MacLeod’s The Corporation Wars: Emergence for another variation.) Medina Station is home to a cadre of old-school Belters, deeply resentful of all author­ity structures and wise in the ways of smuggling and other unsavory sidelines. The combination of this local talent and the Rocinante crew produces enough trouble to make the life of the doctrinaire, rather inflexible Singh miserable. Of course, it doesn’t help that his reading of the situation is that

By mandate from the high consul himself, all humans are citizens of the Laconian Empire. The people on Medina are not a neutral third party…. They are Laconians, and the insur­gents are not a foreign government resisting conquest, they are criminals…. We are not conquering new territory, we are enforcing the law in our empire.

His immediate boss, a canny old admiral, has a more sensible take on the difference between doctrine and practice, but it’s Singh who is left on the hotseat of Medina Station while the admiral proceeds in-system to convince the Earth-Mars navy that military resistance is futile.

The progress of the invasion, the Earth-forces’ political and military responses, and the cat-and-mouse game of resistance-and-occupiers play out in a now-familiar cycle of named chapters, focusing primarily on Singh, Drummond, Holden, and Draper. Despite all the space battles and high-level politicking, it is the smaller-scale story of the Medina Station occupation that is the more grip­ping one, with the resistance figuring ways around and through the Laconians’ superior technology, military organization, and escalating responses to sabotage – and we get to see both sides of the conflict play out, not unlike the cross-cutting of a caper – or (to introduce yet another genre inser­tion) prison-camp-escape movie.

Those POV chapters also offer provide parallax views of the rest of the cast: the strangely tender connection between the Rocinante‘s two least-socialized crew members, ex-gangster Amos and reformed assassin Clarissa Mao (AKA Peaches); Bobbie’s not-entirely-comfortable transition from comrade to captain to resistance operative; and Singh’s even less comfortable tightrope-walk as practical, honorable soldier and ruthless, precise carrier-out of the High Consul’s program of domination – a conflict that eventually leaves him strangely unhinged.

The entire story can be seen as a machine driven by the vision of one compelling monster who is willing to destroy whatever will not or cannot carry out his orders, a machine that will grind up its own workings as easily as it does its external opposition. Unfortunately, Singh isn’t that mon­ster, but a smaller-scale, intermediate opponent, and while this volume ends with a momentary stay against absorption for some of the cast, it is clear that much larger challenges are just over the plot horizon. The Expanse is proving to be one of the most appropriate series titles around – a sprawl­ing, subgenre-devouring world that integrates the close-up and the wide-screen in its vision and makes both equally riveting. 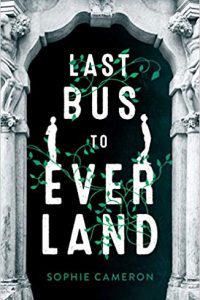