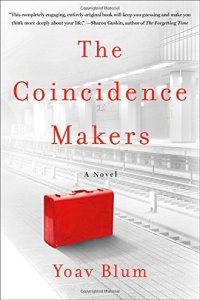 It is a shame that English-speaking readers are deprived of two out of Yoav Blum’s three books to date, since they exist only in Israeli editions in his native land. Consider this description of his latest, The Unswitchable. “[The novel] takes place in a world where everybody has a bracelet that enables them to switch bodies with anyone else. This invention changes all aspects of life—travel, relationships, religion. Dan is the only person in the world who can’t make this switch.” Don’t you want to read that? Well, you certainly would be eager if you had already acquainted yourself with The Coincidence Makers, the first novel that Blum wrote and the first to appear in the USA. It exhibits delightful flavors of Haruki Murakami and Kurt Vonnegut, and, like the work of those two writers, conceals tragedy and philosophical substance beneath its frothy surface.

The book has a notably small central cast, yet nonetheless—thanks to some ancillary plotting that follows necessarily upon its brilliant core conceit–it manages to convey a sense of the entire large world being in play.

Our main protagonist is a fellow named Guy. Next in story importance to him is a woman, Emily. Then comes their companion, Eric. The vibe amongst them is similar to that amongst the young magicians in Lev Grossman’s series, and results from the fact that the three have likewise trained together and are linked by their uncommon profession, that of “coincidence maker.” They are employed by a nebulous firm—goals, motives and morality unknown—which has the power to trigger cascades of events that result in desired outcomes. One teetering coffee cup, for instance, can lead to a lifelong love affair between two strangers. (I should pridefully mention here that I explored almost the exact same premise in my 2011 story “Sweet Spots.”) The adepts can sense the moves that they need to make intuitively, with some veterans being more deft than the newbies. Guy, for instance, is a second-rank practitioner. Later on, we will meet Pierre, a fifth-rank fellow.

Our three heroes work more or less autonomously, receiving their assignments in envelopes slid under their doors, and dealing once in a while with the General, their boss. Unambitious Guy is mostly at ease with his strange employment, although a little conflicted. Emily is more severely doubtful about their work; while Eric seems snarky and devil-may-care. These three contrasting attitudes will ramify and guide the outcome of the tale.

Blum opens each chapter with excerpts from the training materials of the coincidence makers and we gradually build up an understanding of their philosophy and methods—although the whole enterprise never hangs together as coherently as the allied conspiracy in Max Barry’s Lexicon. But it’s not necessary for Blum to deliver engineering blueprints of his imaginary organization, for this is a novel primarily of emotions and metaphysical questions—how to feel about life, and how to live a life. And at the roots of these questions is the issue of love.

Guy, you see, is in love with a specter named Cassandra, a woman he met only on another plane of existence, where they both served as Imaginary Friends. (Don’t ask now, you’ll learn all about this.) And Emily is in love, unrequitedly, with Guy. So while Blum spins various highly entertaining and ingenious subplots—one involving the world’s best assassin, Alberto Brown, who actually never kills anyone by volition yet is still one-hundred-percent deadly—his main thrust is this parallel saga of heartbreak. And I will tell you now that you will never foresee what happens in any of the book, either the love story portions or the coincidence-manufacturing portions. Blum is that sly and devilish. His tale has an inner logic that only seems arbitrary or capricious at times.

The often-epigrammatic language that Blum deploys is simple yet vivid and poetic, perhaps in the manner of Paulo Coelho, yet he generally manages to avoid the twee and faux-naive. (And in fact the genuinely tragic yet redeemable nature of his tale dispels any charges of saccharine or maudlin excess.) Here is a small sample: “He pulled the crumpled page from the trash bin, unraveled it, and made an effort to make it into a piece of paper again. He didn’t even glance at the poem he wrote earlier but turned the paper over and started to write his second poem. And the page embraced the ink, and another path opened before him in the forest.”

I should also mention that Blum himself, without a translator, has rendered his book into English. Wow! [Editor’s note: Blum corrected this to credit Ira Moskovitz for the English translation.]

Ultimately, in terms of cousinly novels, this book feels most like a Jonathan Carroll tale—and in fact Carroll endorses the novel with a blurb. But what this book really provides in its vivid cinematic way is an experience akin to watching a twisty, surreal yet naturalistic movie like Run Lola Run or the Boris Vian-derived Mood Indigo. A succession of uncanny scenes stir us to heartbreak and awe, and leave us transmogrified in ways we could never have predicted. Such a book is the ultimate coincidence maker. 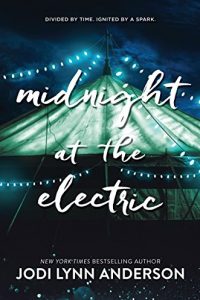