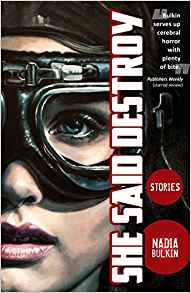 “Intertropical Convergence Zone”, the opening story in Nadia Bulkin’s strong debut collection, She Said Destroy, details the efforts of a general to gain the abilities that will enable him to rule his native country. In consultation with a local shaman, he consumes a succession of objects, each of which grants him a new power. By the story’s end, he has seized control of his country and will remain in charge of it for a long, long time. Reduced to this outline, the story has all the simplicity of myth, and might be a tale of a figure from the distant past. It isn’t, though. Rather, we’re in Indonesia during the 1960s, with a not-too-thinly-disguised General Suharto plotting to grab power. The first object he consumes is a bullet, shot through the heart of a communist organizer, and it foregrounds the fundamentally violent character of the general and his ambitions. Bulkin’s description of the man’s quest to rule embraces and then radically subverts the tendency of all such tyrants to self-mythologize, in so doing connects the fantastic to real world consequence. After the general ingests the bullet, tiny bullets shoot from his mouth when he speaks, an almost comic representation of the brutal consequence of his words. What gives the story its particular impact, though, is the first-person point of view from which it’s told, not by the general, but by one of his lieutenants. This is the man who, on the advice of the shaman, will seek out the objects for the general to eat, taking them from their owners by whatever means neces­sary. In the narrator’s admiring description of the general, of his devoutness, of his hatred for the communists, Bulkin gives us the psychology of the type of person who not only follows such a leader, but commits the crimes requisite to allow his reign. The general thus becomes more a symptom of underlying systemic corruption than a monster sui generis. The deficiencies and depravities of his government are our own writ large. What’s perhaps most striking in all of this is Bulkin’s portrayal of the lieutenant’s unabashed love and devotion to the general, which is what permits the man to commit the most awful acts for him. It’s easy enough to imagine a tyrant’s supporters driven by baser emo­tions, by hate, fear, jealousy, resentment, greed. It’s more of a challenge to envision them motivated by love, because it’s far more disturbing to think that so elevated a sentiment could lead to horror, the road to the inferno’s flames paved in renaissance sonnets and Hallmark cards.

“Intertropical Convergence Zone” is a re­markable piece, and it’s representative of the collection’s other stories. “Violet is the Color of Your Energy” transplants the Gardner family of Lovecraft’s “The Colour Out of Space” from New England to the Midwest, where their small family farm is in danger of being overwhelmed by the larger agribusinesses around it. Bulkin focuses her narrative on Abigail Gardner, who is already concerned about the stresses on her husband before a strange light comes to earth on their property one night. Initially worried about the possible effects of the phenom­enon on their crops, Abigail is reassured when the yield is above average. Before long, though, life on the farm is dete­riorating both literally and figuratively, as animals begin to sicken and die, and Nate Gardner begins to lose his mind. In Lovecraft’s original story, the disintegra­tion the strange colo(u)r brings embodies a random, uncaring cosmos, in which all we are and have might be provender for something beyond our ability to compre­hend. In Bulkin’s revisioning, the color’s effect assumes a decidedly economic dimension, making it a trope for the unrelenting market forces that are destroying the Gardners’ farm. She makes that destruction personal through its corrosive effect on Abigail and Nate’s marriage, which collapses together with everything else. The story is striking in its ability to revise one of the central narratives of cosmic horror in a way that simultaneously honors its original horrors while finding in it new resonance.

Many of the collection’s other stories employ Lovecraft-related material; of these, “Red Goat, Black Goat” is probably the most powerful, a description of an upper class Indonesian fam­ily’s pact with the Goat with a Thousand Young, in which that entity appears in sublime and catastrophic fashion. “Seven Minutes in Heaven”, which appeared in Simon Strantzas’s excellent Aickman’s Heirs, is set in a near-future American town, whose neighboring community died in an industrial accident a scattering of years before. The story approaches the sense of the oblique, daily uncanny that typifies much of Aickman’s best work, then vaults into an ending deeply its own and somehow also deeply Aickman-esque. “No Gods, No Masters”, the book’s original story, concerns a lineage of witches whose power comes from a deal with a demon whose price has been deferred for generation. Their moment of crisis arises when one of their younger members decides to pay their debt. In this story, as in all of her work, Bulkin proves herself willing to follow her conceits all the way to their ends, however extreme. The world ends for her characters in ways large and small.

Nadia Bulkin’s stories take well-known genre tropes and situations and de-center them, in part by relocating them to a new time and/or place, and in part by telling them from different points of view, usually those of figures near but not at the dead center of their narratives. As a result, what was familiar becomes strange, revealing new aspects of itself. Already, Bulkin has earned a reputation as a writer interested in the political implications of her stories’ situations. It’s certainly true, but there’s a way in which the political in her work frequently leads back to the personal, to the desires that split us. Long after the last page has been turned, her complement of monsters stalks the edges of our vision. 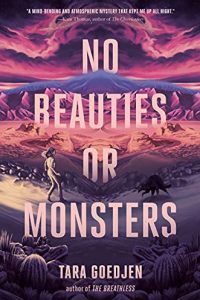 Colleen Mondor Reviews No Beauties or Monsters by Tara Goedjen 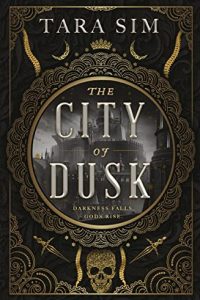 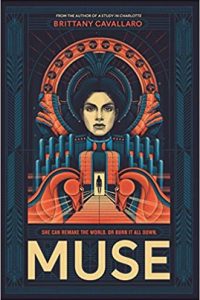