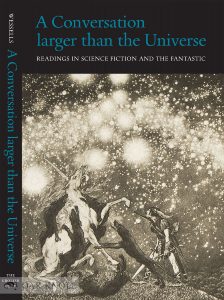 Sometimes an exhibition catalog can provide a much-needed opportunity to step back and regain some perspective on what makes us like this stuff in the first place, even if we can’t make it to the exhibition itself. A few years ago the British Li­brary mounted an extensive SF exhibition which I never saw, though Mike Ashley’s accompanying book Out of this World: Science Fiction but Not as You Know It, made for fascinating browsing, offering endless nuggets and curiosities even if not particularly adding much new to the various literary histories of SF now available (including Ashley’s own). Much the same can be said of Henry Wessells’s A Conversation Larger than the Universe, a series of essays accompanying an exhibit of some seventy items, drawn mostly from Wessells’s own collection, at the Grolier Club in New York through March 10 of this year. Wessells is an antiquarian bookseller and collector as well as an eclectic and voluminous reader – a “bookman” in the now-almost-archaic sense of the term. His passions range from John Crowley and Robert Sheckley to W.H Hudson and Richard Burton, with nods to pulp classics like Doc Savage, and while the 17 more-or-less chronological essays here sometimes revert to encyclopedia-like entries or old-fashioned literary appreciations, they are peppered with fascinating details and provocative insights. I had no idea, for example, that William Beckford, author of the Gothic novel Vathek, was the richest man in England until a scandal sent him into exile.

On the other hand, I wonder what current histo­rians of Gothic literature would make of Wessells’s claim that the first Gothic novel was not The Castle of Otranto, as standard literary histories would have you think, but rather Longsword, by the Irish author Thomas Leland (Wessells also says it was the first historical novel in English and “the first work of hor­ror literature”). Later on, Wessells pays due respect to Mary Shelley (discussing The Last Man, “the first secular apocalypse,” as well as Frankenstein, but also pays attention to Sara Coleridge’s 1837 Phantasmion, which he says is “the first fantasy novel in English”. Wessells is fond of such “firsts”, which sometimes seem as much collectible markers as literary history arguments; we’re told that W.H. Hudson’s 1885 The Purple Land is “clearly the first work of magic (or magical) realism,” something that some Latin American writers might be willing to discuss, and that William Morris’s The Sunder­ing Flood is “the first modern work of fantasy with a map,” suggesting that what most of us viewed as a post-Tolkien phenomenon is actually far older.

I suspect that such claims, some of which are more persuasive than others, are more a matter of affection and enthusiasm than of trivia-mongering, and it’s that affection and enthusiasm that sets the tone of the whole book. As John Crowley says in his introduction, Wessells is fascinated not only by books as objects, but by their contents as well: he’s widely and deeply read in the field, and his “conver­sations” with these books feel exactly like that – like having a rambling post-dinner conversation with a master literary raconteur. His discussions of more recent books range from acknowledged classics like Russell Hoban’s Riddley Walker and Peter Straub’s Shadowland to less familiar titles by William H. Wilson, Wendy Walker, and Timothy D’Arch Smith (part of a fascinating side ramble on rock ‘n’ roll in SF), the most recent being Christopher Brown’s Tropic of Kansas. While the many illustrations can’t quite be the same as seeing the actual exhibit, it’s still exciting to see Crowley’s inscription of Little, Big to Tom Disch, or a handwritten letter to Disch from Joanna Russ. On the other hand, those who simply view the exhibit might miss out on Wessells’s clearly written and generously rewarding love letter to his long involvement with fantastika. 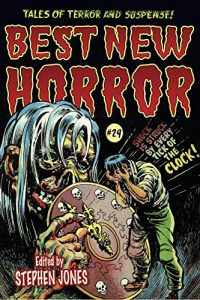 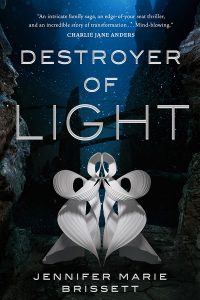