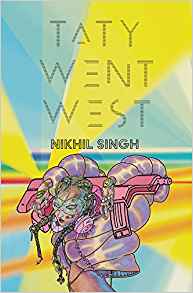 In search of reference points for Nikhil Singh’s energetically transgressive first novel, perhaps cued by the 40-odd black-and-white illustra­tions scattered throughout the text, I find my­self reaching as much for graphic novels as the prose kind. Think of Grant Morrison circa The Invisibles or Alan Moore circa Lost Girls, mix with a shot of Shea & Wilson’s Illumina­tus! Trilogy and a dash of Bryan Catling’s The Vorrh, and you’ll be somewhere in the right neighbourhood. Lauren Beukes’s cover-blurb accurately refers to Taty Went West as a “car­nival ride.” It’s a story of invasion and trans­formation, and its mode is excess: memorable set-piece imagery, showy exploitation, and sometimes questionable taste.

First published in Kenya in 2015 by Kwani?, it is now brought to the UK and US on the heels of its shortlisting for the Nommo Award for best African SF novel. The titular (anti-) heroine is a disaffected teenager fleeing “the locked-down routines of the Lowlands,” seek­ing a new self, lured by the music of holo-pop singer Coco Carbomb to the lawless jungle Outzone. In fairly short order, Taty finds her­self kidnapped by Miss Muffet – a plump, pale, clawed woman who emits a pheromone that makes her impossible to dislike – and deliv­ered into the unsavoury clutches of “the imp pimp,” Alphonse Guava, who coerces Taty into a form of psychic prostitution. Arrayed around Alphonse is a court of equally outland­ish characters, including Number Nun, a repro­grammed ex-missionary robot with porcelain skin; the Sugar Twins, a Siamese pair who can conjoin or separate at will; and Typhoid Mary, a blind zombie with Kewpie doll heads where her eyes should be. But no sooner have we met this merry band than we watch them stomped and scattered by a rival crime boss, Mister Sis­ter, who introduces what he claims is an inter­dimensional infection into the Outzone, in the form of a metaphorically potent symbiote that promises perfect bliss, but in fact transforms its hosts into versions of itself. In a last, des­perate, and somewhat mysterious attempt at vengeance, a partially transformed Alphonse charges Taty with delivering a letter to the postbox of a dead god in the Outer Necropolis.

This perhaps makes the novel sound more action-packed than it feels. Singh’s style is lav­ish, as excessive as the situations and actions it describes; narrative is something that happens to the characters every so often, in between descriptions, rather than being driven by the characters. While many of those descriptions are good, fresh and unexpected, without warn­ing they veer into the cartoonish or questionable. To pick a page more or less at random:

The Dead Duck Diner capsuled a corner just two fingers short of the waterfront. It gleamed like the wet fin of some imaginary car, all sleazy chrome against the fast-forward de­cay of the esplanade. Festooned with rotis­serie jungle chicken, pink-on-green neon and loud checkerboard trim, it bubbled with all the indigestible traffic from the strip. You name the parasite and their umbilical leav­ings would be smeared along the linoleum counter-tops: robo-jox, the bitchdoctors, all the sailor drek, cyborg love bunnies, bible jerk-jumpers, jewel shifters, soldier-camp dropouts, alien trannies, cannibal hobo freak shows, keyboard cowboys, jungle mummies, the whole carnival sucked through the place like a vacuum cleaner and gathered like gunk in the filters.

That “capsuled” and “two fingers short” are effective and efficient, as is the wet fin, arguably to the point of making the rest of that sentence redundant. And I like the list, in principle, but I wince slightly at the casual juxtaposition of the fantastic and the insulting, in particular with respect to “alien trannies.” (Singh identifies as “whatever I like,” and there is a character, later in the book, described by the blurb as “transgen­der,” although within the text they identify as having multiple personality disorder; the execu­tion seemed to me more M. Night Shyamalan’s Split than Matt Ruff’s Set This House in Order.) Over and above all of this, you need a certain sen­sibility to enjoy the fact that the quoted paragraph continues in similar vein until very nearly the end of the following page, when something happens.

I enjoyed such paragraphs more than not. And the central section of the novel in particu­lar, in which Taty flees the symbiont infestation and journeys into the depths of ancient ruins to deliver the aforementioned letter, provides an effective framework for the ugly fecundity of Singh’s imagination, and depth to Taty as a char­acter. There aren’t that many SF novels being published with quite this level of commitment to sheer unironic pulpy invention, and taken at that level Taty Went West verges on the heroic, but it’s never a comfortable reading experience, and doesn’t always feel quite thought-through enough: it is perhaps ultimately a little more inva­sive than transformative. 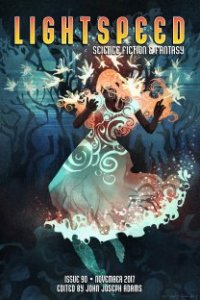