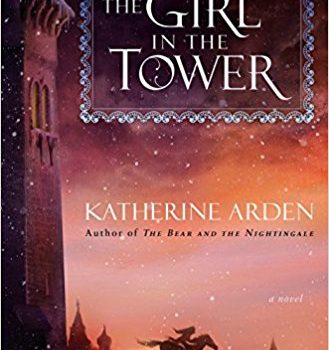 Katherine Arden, The Girl in the Tower (Del Rey 12/17) This enchanting follow-up to the stunning debut The Bear and the Nightingale continues the Winternight series, inspired by Russian folk tales and legends. Heroine Vasilia rejects the acceptable paths of marriage or the convent in favor of an unlikely third option: dressing as a boy and setting off on horseback for adventure, and in the process, she comes to the attention of the Grand Duke of Moscow.

James S.A. Corey, Persepolis Rising (Orbit 12/17) The seventh volume in the bestselling Expanse series marks a major change, jumping forward in time 30 years. The same beloved char­acters from the gunship Rocinante – now older, somewhat wiser, with new responsibilities, and in different kinds of trouble – stand against the galaxy-spanning imperial ambitions of renegade Naval officer Wilson Duarte, who intends to unite humanity under his rule by force.

Ursula K. Le Guin, No Time to Spare (Hough­ton Mifflin Harcourt 12/17) This non-fiction collection of short essays and observations drawn from Le Guin’s blog covers a vast array of subjects with her customary wit and insight, from growing old, to the cultural perceptions of fantasy, to the importance of breakfast. With an introduction by Karen Joy Fowler. “Has the SF arena ever produced a more widely respected public intellectual than Ursula K. Le Guin?… As always, eminently humane and sensible – and utterly necessary.” [Gary K. Wolfe]

Susan Matthews, Fleet Insurgent (Baen 12/17) This collects of 14 stories and vignettes/cut scenes from the acclaimed military SF Under Jurisdiction series, including two original novel­las, plus a “time line/summary bibliography” to orient the stories within the larger context of the series.

Ada Palmer, The Will to Battle (Tor 12/17) The third volume in Palmer’s ambitious and celebrated Terri Ignota series sees the complex balance of the ruling Hives in her future uto­pian world plunged into war as the dark secrets that underlie society’s peace and prosperity are revealed.

Steven Savile, Glass Town (St. Martin’s 12/17) Though best known for his tie-in writing (for Doctor Who, Torchwood, Stargate, and more), Savile is also an accomplished writer of original fiction, but one mostly published in the UK. Glass Town, his US debut, is a dark urban fantasy set in the secret byways of a historical London held out of synch with normal time.

Ken Scholes, Hymn (Tor 12/17) The long-awaited conclusion to the ambitious, sprawling, lyrical Psalms of Isaak quintet that began with Lamentation (2009) is here. The true nature of the mysterious world is further revealed, and the terrible clash of empires draws to a cataclysmic close in this stunning final volume.

Adrian Tchaikovsky, Ironclads (Solaris 12/17) A novella of military SF set in a hellish near-future where the children of privilege – “Scions” – go to war against vastly outgunned enemies while wearing suits of technologically advanced armor. “Short, sharp, and not as depressing as its premise might suggest…. I enjoyed it. If you’re up for something grim and darkly funny, I recom­mend it, too.” [Liz Bourke]

From the February 2018 issue of Locus Magazine
While you are here, please take a moment to support Locus with a one-time or recurring donation. We rely on reader donations to keep the magazine and site going, and would like to keep the site paywall free, but WE NEED YOUR FINANCIAL SUPPORT to continue quality coverage of the science fiction and fantasy field.

In thinking about Gary’s ideas of normal and revolutionary SF, it occurred to me that intent and reception are important factors. I wonder if there can be truly revolutionary science now—even science that yields the most surprising results and forces a paradigm shift upon us is still likely to be arrived at by means of the scientific method. And how often do scientists consciously set out to smash up the