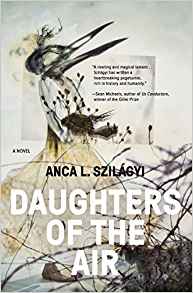 Until just a few years ago, I was barely aware of Argentina’s Dirty War, which purged tens of thousands of its “subver­sive” citizens from 1974 to 1983. These people usually vanished, traceless, leaving behind fami­lies who had no idea what happened to put them at the mercy of the repressive government. The whole affair was hushed up carefully, both dur­ing and after its perpetration, and it still remains unclear how many citizens were carted away and murdered for no reason at all by a fascist state. I’d argue that I’m not unusually ignorant, and that the Dirty War is not common knowledge in the United States – which is why Americans need more art that exposes it.

Enter Daughters of the Air, a luminescent de­but novel by Anca L. Szilágyi, in which the main character, Pluta, must cope with the emotional consequences of her father’s disappearance in the Dirty War. Pluta’s loneliness without her father, trapped as she is at a boarding school outside New York City in the summer of 1980, pushes her to hitchhike to Brooklyn and try to make a life for herself there, despite her tender years (she is 14), meager funds, and total absence of street knowl­edge. It’s an odd, unpredictable journey, one that involves unlikely advocates – such as a car thief named Bobby who boots Pluta out of his apart­ment one night, then rescues her at great personal difficulty a few months later – and a silvery thread of magical realism.

Daughters of the Air owes its attitude toward the supernatural more to South American magical realism (involving politics) than to its American cousin (involving whimsy), but the mix of real­ity with fantasy is Szilágyi’s own. The primary fantasy element is a fleshy pair of wings Pluta grows over the course of the summer she spends alone in Brooklyn. These wings are real, visible to doctors and strangers, not a symbol of Pluta’s adolescence or a fantasy. However, she also has an encounter late in the book with a figure named Marbod. The nature of this encounter remains unclear, whether it’s a hallu­cination or a visit to one of New York’s secret places. Marbod, as he appears, does not closely match any mythic figure I could track down, but this is par for the course in Szilágyi’s novel. Although mythology and magic underlie the book, there’s never a one-to-one relationship between a famous mythic figure and its avatar in the book. Perhaps Pluta resembles Persephone, or the Little Mermaid; perhaps she’s a new creature, part of a fairy tale of her own making.

The buried wire in the book is the conflict between Pluta and her shallow, disconnected mother, Isabel. Although the narrative alternates Pluta’s experiences in Brooklyn with Isabel’s experiences across the years up to and since her husband’s disappearance, bitter­ness somewhat obscures Isabel’s character, and this is one of the novel’s few flaws. It’s the rare novel that portrays a mother as monstrous without apology, and that alone is worth applause, but the gestures made toward Isabel’s motivations feel too slight. Even so, the dimensions of the mother-daughter conflict fairly ignite the pages in which they’re depicted.

She imagined exoskeletons for them both, mother and daughter, moving together at arm’s length from one another. Arm’s length was all that was possible, a careful dance.

Szilágyi only touches this wire occasionally rather than using it to drive the narrative. Instead, Pluta’s journey through the novel reads almost as a picaresque. Or perhaps a city narrative, in the vein of Ricardo Piglia’s The Absent City, also about the Dirty War. The series of characters and scenarios Pluta encounters have little logical progression, ex­cept as illustration of how unpleasant New York City really was in 1980. Such illustration is amply done, however; rarely does a book so effectively push the grit of New York under a reader’s eyelids and finger­nails. If the choices Pluta makes feel slightly cliché, as she slides rapidly into teenaged prostitution after running away from home, the grimy characterization of Brooklyn before it became a hipster haven gives the book a sound and sensation that is truly original.

In fact, it’s partly the stew of disparate elements Szilágyi cooks up (and partly her beautiful language) that makes the novel such an inimitable read. She invokes both Greek myth and Hans Christian Ander­sen; she sketches New York and Argentina, both at historical moments of great crisis; she makes a father story also a mother story and an episodic coming-of-age story. Szilágyi exploits some of these elements with more skill and thoroughness than others, but in blending them she has assembled something new. Plus, there’s the language.

The woman from her dream at the opera house, with an eye replaced by a flower, resurfaced in her mind. A bird had pecked it out, that eye, had dropped a seedling in its place. Bees would make a strange honey of it.

Only Le Guin bothers to write coming-of-age stories with such attention to each word.

Although it’s a flawed novel, sometimes floating too far from the reader on its ambition and sometimes dropping threads necessary for a perfect tapestry, Daughters of the Air is well worth reading. Beyond its singular blend of myth and magic, its potent and poetic language announces a worthy new voice in, if I can call it this, the literature of the melting pot. Szilágyi is writing from the center of multiple cultural Venn diagrams, about historical and emotional topics more readers need to explore. 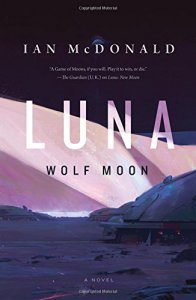