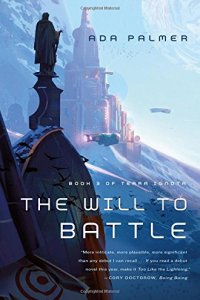 In my consideration of Ada Palmer’s Too Like the Lightning in a piece at The Barnes & Noble Review, I found this kickoff to her quartet to be rife with Bester-style pyrotechnics, complex and intriguing linguistic and sociopolitical speculations, deep moral and ethical issues, and maximalist kitchen-sink plotting. It was an awesome debut novel, especially from a writer who had never tested the literary waters with any shorter pieces. The question then became, could she bring off similar victories in the second book, Seven Surrenders, and in the penultimate volume, The Will to Battle? (Perhaps the Stars will conclude the cycle.)

Let’s have a look.

It should be said from the outset that the second book continues in the discursive, dialogue-heavy, intellectual, politesse-centric mode of the first book. Palmer is not out to write a slam-bang, blood and thunder, plot-erific page-turner. (Which is not to say that absolutely nothing happens. Quite the opposite, for the fate of civilization is at stake.) Also, her decision to couch the narration of protagonist Mycroft Canner in Enlightenment-style prose contributes to the density of the reading experience. I think an apt comparison might be a hybrid of Eddison’s A Fish Dinner in Memison, Howells’s A Traveler from Altruria, and Asimov’s Foundation trilogy, the latter touchstone particularly apt since Palmer’s future features a kind of working psychohistory. Also allied to Palmer’s methodology are Jo Walton’s Thessaly books, and in fact Walton and Palmer have conducted a dialogue on this style of SF.

Now, for me, this is all a plus. The first two books are, by turns, witty, deep, shocking, enthralling, demanding, and at times textbook-tedious. Another factor in their de-compactified delivery–de-compactified in the sense that if feels as if infinite subdimensions have been expanded to fill traditional space–is the timeframe of the tale, only a few days. Thus events are delivered at nearly realtime granularity.

In any case, the core of Seven Surrenders lies in the unfolding revelations that the stasis of this future quasi-utopia is about to become unraveled, and that various factions are fighting to ensure or prevent these changes. This world of 2454, divided into seven Hives, has been without war for centuries. It is now disclosed, after much maneuvering, that this pleasant condition derives from the O.S. conspiracy being helmed by three of the Hives. They are able to identify destabilizing troublemakers (cue the Mule) and preemptively assassinate them before they can upset the peace.

By the close of the book this news has been disseminated worldwide, and now civilization braces for war as a repercussion. Mycroft, despairing at the irreversible transfiguration of his miracle child, Bridger, finds himself forced to take up the battle standard, in a scenario that curiously feels in parts like our tumultuous year 2017.

“You know how to fight this war, Achilles. We have no idea what’s coming, but you do. You’ve fought this war before, a future war, with flying cars, and tracker computers, and new weapons made from Mukta fuel and U-beasts. You’ve already fought Apollo’s war. You can teach us.”

The veteran rubbed his hands, exploring their calluses, so many kinds, too thick to let the nerves beneath feel much anymore. “It won’t start with new weapons. It’ll start with bats, and kitchen knives, and scared people defending themselves against neighbors they can’t trust. Then Sniper’s hero delusions will spread, people imitating war movies with the guns and planes and missiles hobbyists have stashed in their basements. Innovation will take longer.”

The title of the subsequent book refers to that stage of realpolitik affairs when the citizenry of the rival states are willing themselves to actually fight, to leave peace behind, making mental and logistical preparations, getting all their ducks in a row. (Again, a shocking resonance with our present day.) And so that pre-belligerent groundwork is what we will witness through the eyes of Mycroft Canner, our bondaged criminal-cum-slave.

My great merit as an historian is that I am known to be insane. No court or council can trust my testimony, and each reader may pick and choose what to believe, dismissing anything too unsettling as lunacy. I gave the public what it wanted of the truth, no more, leaving the pundits and propagandists free to shape opinion into faction, and faction into sides and enemies.

This chronicle is different. My first history was written to be shared and used, now, by my masters. This chronicle cannot be shared, not while these secrets are still War Secrets. The powers that bid me record their doings week by week will not even let each other read the transcript. I alone enjoy this strange trust from the many leaders of what will soon be warring states. I hear the inner whispers of palace and boudoir, whispers which will shape armies, yet which history will never hear unless someone records them. It is this human underbelly of the war my masters bid me chronicle, not for the public, nor even for themselves, but so a record will survive…

Naturally enough, not to commit too much of a spoiler, Mycroft’s concluding sentence of this book is “That was the first day of the war.”

But in the mean time we have many places and peoples to visit–allowing Palmer to present a huge variety of exotic figures and places–as old alliances among the Hives crumble and new ones take shape. We have courtroom audiences, clandestine meetings, kidnappings, confrontations both public and private, armed assaults and crude fistfights. The new figure of Achilles, an “anarchoconstruct,” the master of warfare who will manage the upcoming combat, is paramount. But all the old characters of the first two books return. One of the most outrageous is J.E.D.D. Mason, who happens to be a visiting deity from another universe.

“[My universe] differs greatly from this one… My universe does not have time, space, limit, ignorance, discovery, exploration, hope, solitude, or death… Your own Creator, the Maker of this universe, is My Peer. He made this flesh so that I might visit His universe and here perceive His works. It is a dialogue between Us. During My visit I have experienced some forms of human suffering, so I sympathize with what you endure for Our dialectic, but I know no other way for Us to communicate.”

The tenor of this speech extends to and illuminates Palmer’s entire cast of characters in general. While not posthuman per se, as in many recent SF novels, they tend towards that state. They are fathered by Jack Kirby out of A. E. van Vogt. While this makes for engagingly wild-eyed attitudes, abilities and affrays, it also, I think, cuts down a bit on possible emotional bonding on the part of her readers. Yes, one sympathizes with Mycroft’s plight, his ups and downs, but to ring in E. R. Eddison once again, it’s all rather like the glorious battles in The Worm Ouroboros, at the end of which the slain get up to fight another day.

But along the way, Palmer generously shovels enough grandiose ideas and speculations, cynical and stoical takes on life, philosophical conundrums and prescriptions for living, to fuel a dozen lesser books. In Chapter Five, for instance, we get a set of UNIVERSAL LAWS which could actually be put into practice. Later, we learn with a chuckle who one of the big mercenary players in this future is:

All Hives are Frankenstein chimeras, stitched from mergered peoples: the Humanists were born from the Olympians and One Big Party, the Cousins absorbed Rainbow Bridge and Schools Without Borders, Europe swallowed Volemonde and IBN; so many names from the heady decades after the Great Renunciation, when dozens of newborn Hivelets vied for slices of mankind. The fittest survived, but with the conquered within them, as conquered bacteria became the mitochondria which feed the cells that crawl through volvox, trilobite. and coelacanth toward Mars. One suture is still fresh. To me it is history, but to Papadelias, Jin Ito-Jin, Joyce and Felix Faust, sixty-four years ago is very living memory. Greenpeace, lean of members but fat with forests, farms, and mountains. In Greenpeace had gathered those who loved the land, the farmers, shepherds, seaherds, naturalists, Earth Mother’s self-appointed guards. Here too, as the geographic nations died, accumulated their parks, wilderness, sanctuaries, refuges, and reserves, adopted by guardians determined to ensure that the Church War’s carnage left the untouched untouched.

And so a pious, ostensibly selfless NGO in our world today is transformed into something akin to the old Holy Roman Empire. This laughable lesson that history plays as it frustrates our hopes and fears and expectations is perhaps Palmer’s main theme.

Any reader who has ever thrilled to the intricate machinations of the Dune books, or the Instrumentality tales of Cordwainer Smith, or the sensual, tactile, lived-in futures of Delany or M. John Harrison, or even to the The Golden Oecumene series by John C. Wright (an author diametrically opposed to Palmer’s views, but who shares her addiction to challenging stefnal worldbuilding) will enjoy the mental and emotional workout offered by Palmer’s challenging Terra Ignota cycle, whose fourth book will surely cap the edifice resoundingly. 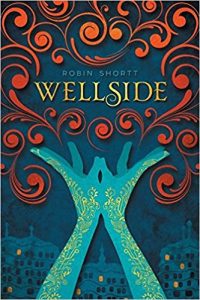 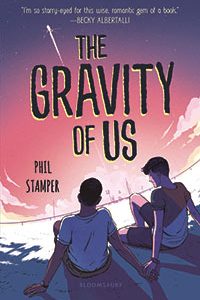 Colleen Mondor Reviews The Gravity of Us by Phil Stamper