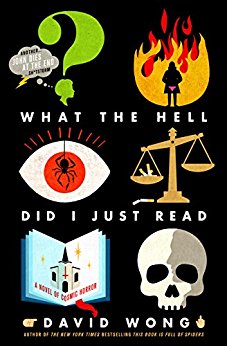 What the Hell Did I Just Read by David Wong, book three in the John Dies at the End series, claimed first place on the hardcover list, followed closely by last month’s first place winner, Provenance by Ann Leckie. Brandon Sanderson’s Edgedancer (Tor), which was previously published in Arcanum Unbounded, was the new runner-up; we had 59 nominated titles, the same number as last month.

Long-running series topped the paperback list with Mercedes Lackey’s Closer to the Chest, book three of the Herald Spy trilogy and part of the 40+ book Valde­mar series, winning the top spot on the paperback list with a substantial lead over the 17th book in the Vorkosigan Saga, Gentleman Jole and the Red Queen by Lois McMaster Bujold, in second. Jacey Bedford’s Nimbus (DAW), book three in her Psi-Tech series, was the new runner-up. There were 65 nominated titles, up from 60 last month. Note: number seven, Philip K. Dick’s Blade Runner, is actu­ally a media tie-in edition of Do Androids Dream of Electric Sheep? with both titles on the cover.

N.K. Jemisin continued her Broken Earth trilogy’s dominance on the trade pa­perback list by again winning the top two positions. The Fifth Season came in first place, with twice as many votes as The Obelisk Gate. There were no new runners-up. We had 72 nominated titles, up from 62 last month.

Welcome to Night Vale novel It Devours! by Joseph Fink and Jeffrey Cranor jumped to the top of the media-related & gaming-related list in its first month of publication, followed by the anonymously edited Star Wars: From a Certain Point of View. There were no new runners-up; 32 titles were nominated, up from last month’s 24.

From the January 2018 issue of Locus Magazine