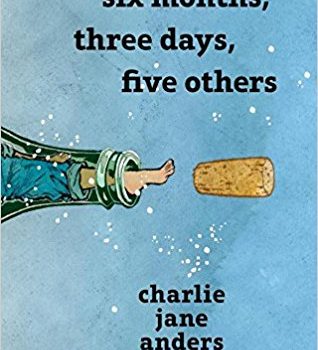 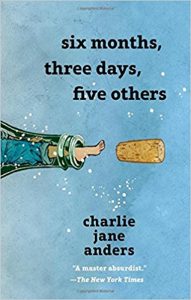 Yes, this is going to be one of those reviews, full of glowing praise. Six Months, Three Days, Five Others collects six stories by Charlie Jane Anders, all edited by Patrick Nielsen Hayden for Tor.com. Although some are better than others, they’re all good reads.

Anders’s unique humor provides a uniting theme. Only some of the stories are explicitly comic, but all benefit from her linguistic wit and her quirky but generous characterization. Her stories seem to say with affection, “People. We’re weird. What can you do?” She’s particu­larly good at tailoring prose to her characters, revealing their lives through their diction. Char­acters go to “one of those mom-and-pop Portu­guese places” and “the kinda-sorta gay bar.”

Some of the stories take a fluid approach to genre, crossing boundaries with narrative con­fidence that reminds me of Michael Swanwick’s absurdity. Their prose and characters aren’t alike, but their free-wheeling, energetic gonzo approach is similar and fun.

Another common (though not universal) theme is a focus on what might be marginalia in a more traditional piece. Her plots sometimes dwell in unexpected corners, related by unex­pected narrators.

The first story, “The Fermi Paradox Is Our Business Model”, is overtly comic, told from the perspective of two aliens coming to Earth. It’s a clever thought experiment, amusingly executed.

“Instestate” is an oddly quiet story about the daughter of a mad scientist. He has replaced his human parts with mechanically enhanced ones, which the narrator’s greedy siblings are eager to inherit. The combination of far-fetched science and mundane family detail provides a thoughtful, surprising setting for contemplating loss and inheritance.

The highlight of the collection is the titular Hugo-winner “Six Months, Three Days”, a doomed romance between a psychic who sees a fixed future and another who sees many possible outcomes. The story is exceptional. Word-by-word, every sentence is beautiful. The charac­ters are intimately sharp and detailed. Still, its most startling achievement is making abstract philosophical questions palpable and personal.

The three other stories – “As Good As New”, “The Cartography of Sudden Death”, and “Clo­ver” – are also good stories, though weaker than the best. “Clover” in particular is plotted in an exciting, unexpected way, veering between ideas and points of view. The weakest of the bunch is “As Good As New”, which seems more bisected than enhanced by its cross-genre turn.

The unfortunate thing about this collection’s narrow scope is that it doesn’t allow space for Anders’s other brilliant stories like “Ghost Champagne” from Uncanny or “The Super Ultra Duchess of Fedora Forest” from the an­thology The Starlit Wood. I hope Anders has the opportunity to publish a fuller collection at some point.

In other words: Charlie Jane Anders is ridicu­lously brilliant.

Paula Guran Reviews All the Fabulous Beasts by Priya Sharma