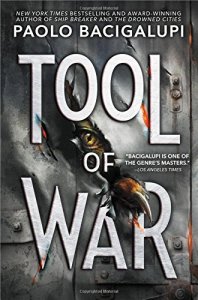 Paolo Bacigalupi, Tool of War (Little, Brown 10/17) This concluding volume in the series begun with Ship Breaker focuses on Tool, the bioengineered “aug­ment” half-man, half-beast from earlier in the series, who broke his obedience conditioning to lead a pack of soldier boys in a war against his wealthy masters. “Grandly concludes a trilogy which is as thrilling and thought-provoking as anything in recent young-adult SF.” [Gary K. Wolfe]

Elizabeth Bear, The Stone in the Skull (Tor 10/17) Bear returns to the world of her Eternal Sky series with a new trilogy. Brass automaton The Gage once served a wizard, now long dead, and these days works as a mercenary. The Gage sets out with a partner, the bit­ter ex-bodyguard known as the Dead Man, to deliver a message to the queen of one of the Lotus Kingdoms – and inadvertently walks into a war of succession. “It’s an enormously rich and textured novel, magnificently compelling – and really easy to read… an astonish­ing delight of a book. I enjoyed it enormously, and I’m desperately eager to see what comes next.” [Liz Bourke]

Lila Bowen, Malice of Crows (Orbit 10/17) The third book in the acclaimed Shadows series after Wake of Vultures and Conspiracy of Ravens continues to ex­plore this dark, supernatural, alternate version of the American West as the Ranger Rhett leads a mission to pursue a villainous alchemist. Bowen is a pen name for Delilah S. Dawson.

Orson Scott Card, Children of the Fleet (Tor 10/17) Card returns to the world of his beloved Ender’s Game series, launching the new Fleet School series. After the brutal conflict of the Third Formic War has ended, in a time of peace and expansion, the orbital Battle School has transformed into Fleet School, and now trains the best and brightest children to become leaders of colony ships and new settlements.

Ka: Dar Oakley in the Ruin of Ymr, John Crowley (Saga 10/17) Crowley is justly famous for his ambi­tious, textured, complex literary novels, and he’s out­done himself here. Ka is the lyrical tale of an immortal Crow named Dar Oakley, and explores his life across millennia as he watches the rise and downfall of human civilization and journeys to mythic realms including the land of the dead. “As haunting and provocative as anything Crowley – or almost anyone else in the last several years – has written. It may be some sort of mas­terpiece.” [Gary K. Wolfe]

Charles de Lint, The Wind In His Heart (Triskell Press 10/17) The master of contemporary fantasy has written a new adult novel after almost a decade of publishing books for younger readers. In this richly imagined fantasy, part of the beloved Newford series, several people with lives touched by magic converge in the American Southwest and struggle to escape their troubled pasts.

Gardner Dozois, ed., The Book of Swords (Bantam 10/17) This original anthology includes 16 stories of epic fantasy and sword & sorcery, with work by Daniel Abraham, C.J. Cherryh, Robin Hobb, Ellen Kushner, Ken Liu, Garth Nix, K.J. Parker, and more. Also in­cludes a new story by George R.R. Martin set in the world of A Song of Ice and Fire. The book is “full of long and fun sword-and-sorcery tales, and is entertain­ing throughout… this is one of the anthologies of the year.” [Rich Horton]

Frances Hardinge, A Skinful of Shadows (Amulet 10/17) Hardinge is one of the most consistently ambi­tious and accomplished YA authors, and her latest book is no exception: Makepeace, the 12-year-old illegiti­mate daughter of an aristocratic family during the Eng­lish Civil War, is prone to possession by ghosts… and when the spirit of bear invades her body, she goes on a journey through the war-torn countryside to escape the terrible designs of her family.

Joe Hill, Strange Weather (Morrow 10/17) Though best known now as the author of expansive thrillers like The Fireman and NOS4A2, Hill first came to attention in the genre through his moving and inventive stories. Strange Weather is a return to (shorter) form, with three novellas and a short novel, almost all original (“Snapshot” was published previously in a different form as “Snapshot, 1988”). Hill shows off his range with works of supernatural horror, weird SF, and crime fiction, all of them captivating.

Gregory Maguire, Hiddensee (Morrow 10/17) Maguire is a master of retellings and reinventions, working wonders with the rich material of fairy tales, the Oz series, Alice in Wonderland, and other imagined uni­verses. His latest book explores the backstory of the Nutcracker from E.T.A. Hoffman’s classic “The Nut­cracker and the Mouse King” (and the more famous evergreen holiday ballet adaptation by Tchaikovsky), adding richness and depth to the story of the Nutcrack­er, the ailing Klara, and the enigmatic toymaker Dros­selmeier.

Rivers Solomon, An Unkindness of Ghosts (Akashic 10/17) This literary generation starship story takes place on the HSS Matilda, a vessel that carries the last of humanity to a supposed promised land… while rec­reating the same horrible racial inequalities that existed in the antebellum American South. “Among the most provocative and fiercely passionate of recent generation starship tales, and Solomon among the most distinctive new voices to emerge this year.” [Gary K. Wolfe]

Russell Letson: On revolutionary vs normal SF (in the pseudo-Kuhnian sense) and other matters

First I have to say that the notion of revolution in art is one that puts me on guard right away—unlike scientific models, which are structures of propositions and evidence always open to reformulation, art is not an attempt to produce a coherent and testable system, nor is it fundamentally propositional, nor does it react to surprising new “data” in the way that science must if it is to remain