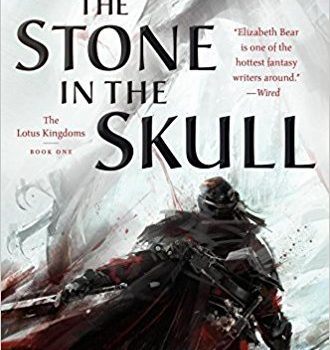 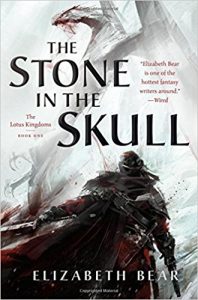 I can’t be objective about Elizabeth Bear’s The Stone in the Skull. I can’t even pretend to even-handed objectivity, that necessary sleight-of-hand performed by every subjective reviewer: I love it just a bit too hard and too much. This is a problem I have encountered before, not least with Elizabeth Bear’s previous novels in the same world: the Eternal Sky trilogy of Range of Ghosts, Shattered Pillars, and Steles of the Sky. That trilogy is one of the best – most deeply thought, carefully structured, and elegantly finished – epic fantasies of the last decades. It remains to be seen whether the trilogy that opens with The Stone in the Skull will equal its predecessor’s achievement, but the initial auguries are very favourable.

The Gage and the Dead Man are partners, carrying a message from the most powerful wizard in the world to the ruler of Sarathai-tia. The Gage is a brass automaton – once a human being, now given deathless life by a Wizard of Messaline. The Dead Man is a survivor of a now-fallen caliphate, once a bodyguard of the Uthman Caliph, who clings to his identity as a Dead Man because he has lost everything else.

In bringing their message to Sarathai-tia, they are walking into the middle of a war. Sarathai-tia is one of the Lotus Kingdoms, where the sky by day has a black sun – the Cauled Sun – and by night is lit by a daylight-bright (daylight outside the Lotus Kingdoms, at least) river of stars. The several Lotus Kingdoms were once united under the Alchemical Emperor, and some of his descendants and their allies aren’t content with their own separate inheritances.

Mrithuri, the rajni of Sarathai-tia, is threat­ened by enemies from two sides. Meanwhile, in the north, her cousin Sayeh, rajni of Ansh-Sahal, and Sayeh’s young son and only child Drupada, are threatened both by natural disaster and by the same enemies that menace Mrithuri. When Drupada is kidnapped, Sayeh rides hell for leather to try to retrieve him – but ends up with a broken leg, captured by enemies, and separated from her son. There is magic at work, and the riddle of a Wizard of Messaline is the only guidance that may give Mrithuri and her allies a way through the dangers that assail them towards survival.

The Stone in the Skull is a novel that opens with an ice-wyrm attack and closes with an assassina­tion attempt in a city soon to be under siege. Along the way, it offers earthquakes and underwater volcanoes, politics and brigands, and a careful, thoughtful interrogation about the nature of love and human connection, and the tensions between love, duty, and necessity. Where Range of Ghosts and its successors were working deeply within the epic tradition, albeit in lush and innovative ways – a displaced heir, an enemy with terrible powers and greatly destructive intent, a journey with a small band of companions – The Stone in the Skull blends an epic canvas with the traditions of sword and sorcery. The Dead Man and the Gage are ad­venturers in the mode of a tradition that includes Leiber’s Fafhrd and the Gray Mouser and Howard’s Conan the Barbarian: masterless warriors, old enough to be cynical; wanderers without a cause who’re ready to deny that they’re looking for one. But when a cause finds them, they don’t – maybe can’t – turn aside.

Bear’s worldbuilding is, as ever, a richly detailed delight, rendered tangible in cut-glass prose. The precision and care with which she employs language make the landscapes through which her characters move come powerfully to life – and gives those characters, too, powerful presence and compelling life. There’s Mrithuri, the young rajni, with her life regimented by duty, balancing her weaknesses against her strengths and afraid that none of it will be enough to defend her king­dom against her enemies. Her relationships with the people in her court, all of them individuals, are deftly shown, but most surprising – and most gratifying – is the connection she finds with the Dead Man. Bear threads the complex interplay between their human connection and the duties that mean neither of them can act exactly as they wish with incredible grace, giving us an experienced warrior who trusts his much-younger female lover to know what she’s doing, and who respects that he cannot defend her from her duty. The connection between Mrithuri and the Dead Man is paralleled by the connection growing between the Gage and Mrithuri’s handmaiden Chaeri, a tentative and very human relationship between an impervious brass automaton and a young woman.

This is only a fraction of what’s going on in The Stone in the Skull. It’s an enormously rich and textured novel, magnificently compelling – and really easy to read. Despite its sprawling, epic canvas, its pace is tight, and Bear cuts between plotlines with an adroit eye for tension. The Stone in the Skull is an astonishing delight of a book. I enjoyed it enormously, and I’m desperately eager to see what comes next. 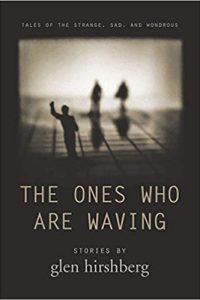 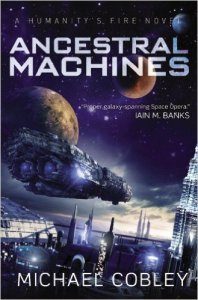