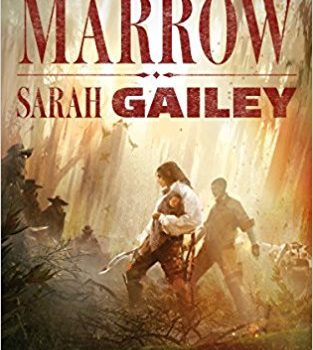 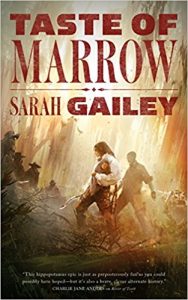 A Taste of Marrow is the sequel to Sarah Gai­ley’s alternate-history-with-American-hippos River of Teeth. While River of Teeth was an entertaining caper, if a flawed book – Gailey’s transitions cut brutally across time and space, jolting the reader to a new location or across a span of time with never quite enough context to make for a smooth continuity of reading experi­ence – Taste of Marrow is a story about hope, family, and change. And capers, of course – but here the capers are almost beside the point.

Separated from his lover Hero by the events at the end of River of Teeth, Winslow Hound­stooth can’t face the possibility that Hero is dead. All his energies are thrown into finding Hero – which worries the last of his remaining friends, the conwoman Regina “Archie” Ar­chambault. Houndstooth’s obsession is dragging them across the Mississippi basin, and Archie’s starting to think Houndstooth needs to face reality. She herself wants to get back in proper touch with a certain federal marshal with whom she’s nurturing a romance.

Hero’s not dead. They were gravely wounded by the assassin Adelia, who very carefully stabbed them so that they would not die, and who then tended them in their recovery. (Adelia is very determined that she’s a retired assassin.) Hero, in return, has been helping Adelia, who has recently given birth to a child, Ysabel. Hero believes that Houndstooth and Archie are dead, and they haven’t really felt the impetus to go anywhere by themselves.

When Ysabel is kidnapped, Adelia and Hero travel to Baton Rouge. Hero won’t leave Adelia to face the kidnapping of her infant daughter alone, and Adelia, feverish and ill and just a little desperate, is glad of their company. It turns out that Ysabel’s kidnapping has been orchestrated in order to force Adelia to commit an assassina­tion – a convoluted and overly complex piece of stage-management.

Meanwhile, an obsessed Houndstooth and Archie have also arrived in Baton Rouge, as has Marshal Carter, Archie’s beau, who’s been pursuing Adelia for months in order to bring her to justice. Houndstooth is frantic and violent when it comes to finding Hero.

Things come together in a conclusion that involves feral hippos attacking boats, federal marshals being told off for expecting their con­woman girlfriends to give up their careers, emotional reunions, and blood.

There are a lot of fun elements in Taste of Marrow, just as there were in River of Teeth. Hippos. A cast of misfits. Good dialogue. Telling description. Interesting characters, including queer and genderqueer characters, and people of colour. But like River of Teeth, for me, Taste of Marrow ultimately feels shallow and poorly structured, more a series of loosely connected character vignettes than a story with a genuine narrative through-line and a solidly coherent theme. Too, I don’t understand why River of Teeth and Taste of Marrow weren’t written as one single novel: they comprise a single story, and several of the weaker structural elements might have been better addressed if the whole story had been treated as a unity from begin­ning to end.

For all my complaints, Taste of Marrow is an enjoyable ride. Gailey is a promising writer, and I will be looking forward to her future work – if hoping that it’ll be a little more fleshed-out.