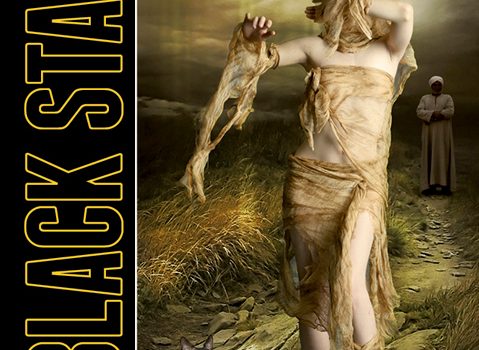 It may be September when you read this, but it is a hot and muggy July as I write. The kind of weather that makes you feel poorly even if healthy, and if you catch some sort of bug, it makes you feel even worse. That is what happened to me and why this column is a bit shorter and probably even more random than usual.

Sirenia Digest is a monthly PDF publication by Caitlín R. Kiernan that often features, among other things, an original story she’s written. (A personal Patreon invented a long time before Patreon.) Originally, the contents were vignettes of “darkly fantastical erotica,” but in recent years there have often been stellar stories that aren’t all that erotic. Case in point: July’s “Fairy Tale of Wood Street“, in which the narrator wakes up from a disorienting dream to discover her girl­friend of several months has a tail. Her day con­tinues, and she experiences that uncomfortable feeling that comes from not recalling something you should know (early onset Alzheimer’s?) and hearing something you shouldn’t hear (am I losing it?). Then the film the couple sees that evening incorporates a very dark folkloric tale that further unsettles. An unlikely answer settles all ques­tions. Revelation can destroy, but it is also our salvation. A rich, and even romantic, story. (For those of you who claim to sometimes be put off by Kiernan’s style, you have no excuse. This one is quite accessible.) 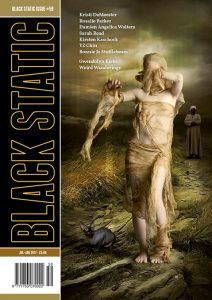 Black Static #59 features seven stories, all by women. Whether this was by intent or accident, it is nice to see more women in a magazine that usually has mostly male writers. [Editor’s note: In 2017 so far, Black Static has published 16 stories by men and 17 stories by women.]

At the start of “Here, Only Sorrow” by Damien Angelica Walters, one five-year-old twin boy, Lucas, has died. The living sibling, Aidan, and his mother cope with the devastating grief: she, at least partially, by taking sleeping pills; he by pretending to be his lost brother at times. Aidan’s make-believe is unhealthy, but it is a phase he will outgrow. Mom’s tendency to lose her temper with him is even less healthy. Aidan’s solution to their pain is effectively chilling.

“Ghost Town” by Bonnie Jo Stufflebeam is difficult to describe without going into too much detail but, loosely, it is about love and loss and how no one can control death and how the dead can never understand the living. There’s a touch of Greek mythology involved. Original, but imperfect. Charming, but sad. A story that stays with you.

Archaeology is inherently suspenseful, and those who pursue ancient secrets tend to be pas­sionate and competitive enough to be driven to taking chances and bending rules. A good set-up for an entertaining horror story like “Endoskel­etal” by Sarah Read. When Ashley realizes there is a unique Neolithic discovery she is unlikely to be allowed to officially study, she recklessly disturbs the site, and takes a specimen to study while she has the chance. Bad Things Happen and we are teased with the idea that this Bad Thing may save the world from further Bad Things, or this Bad Thing has unleashed more Bad Things.

Kirsten Kaschock‘s “The Body Is Concen­trated Ground” vividly describes how Hettie, the narrator’s sister, becomes addicted to self-detona­tion. This habit leaves gruesome pieces festooned about, but at least she quickly “recoagulates.” The sisters live in a house that has raised them and cares for them. A strange little tale that disturbs for reasons one cannot quite pin down.

Rosalie Parker‘s well-written “The Dream­ing“, about a man who finds a new career as a sha­man, can’t quite decide whether to be humorous or to take the protagonist seriously, so, ultimately, it is a bit unsatisfying.

“When We Are Wide Open” by Kristi De­Meester is, I guess, a good story. I usually like DeMeester’s work, but I’m not the person to weigh in on this one. I have issues with portray­ing women’s reproductive systems as monstrous. So: pass.

The whimsical fairy tale “How the Maine Coon Cat Learned to Love the Sea” by Seanan Mc­Guire isn’t dark, but the other stories in Uncanny 7-8/17 are dark enough to be considered here.

In “A Nest of Ghosts, a House of Birds” by Kat Howard a young woman named Luna inherits her grandmother Lily’s house, 20 years after Lily has passed. It is a place her mother, who also felt rejected by Lily, never liked. Moving in, Luna finds the house inhabited by a variety of birds, but with no avian droppings or other nastiness. And she hears voices in her dreams. Grandma Lily has left some hints of what’s going on. Granddaughter Luna takes after her, and soon understands much of the mystery. Despite hurt and fear, the mother eventually provides another clue. The kind of ghost story that leaves the reader feeling comforted rather than fearful

Maurice Broaddus‘s “The Ache of Hom” features neighbors Celeste Burroughs and Jamal Keedy, known as “Ghost.” They live in the sort of neighborhood that white people drive through with their car doors locked, and where conde­scending do-gooders see residents as projects rather than people. Both try to work for their community. Both possess mild magical powers. Limnos, a godlike being personifying Feast and Famine, shows up. He, like so many others, has a self-serving agenda, one that Celeste and Jamal need to alter. Both characters and their community are well portrayed, but there are obviously a lot more stories to tell about them. They help reassure us that despite the darkness of humanity, people also provide the light of hope.

Mary Robinette Kowal invents a Renaissance London urban fantasy setting in “The Worship­ful Society of Glovers” with a few deft writing strokes mentioning brownies in guilds, fairy chap­erones, and ensorcelled gloves that can endow the wearer with cunning or strength or health or other attributes. Vaughn is a journeyman glove maker. His sister, Sarah, has life-threatening seizures. He hopes to somehow earn enough to buy her magic gloves that will control them. But Vaughn, beset with bad luck, makes a deal with a brownie. Bargain making, however altruistic, is usually a bad idea in fantasy, and so it is here. The only problem with this excellent dark fantasy is that it ends too soon. There seems to be much more story yet to come.

To say “city” in Cassandra Khaw‘s “I Built This City for You” is (sort of) a symbol for a person, does not do the author’s literary use justice. It is more like she sampled the old Jefferson Starship song (trivia alert: the lyrics are by Bernie Taupin, more famously Elton John’s collaborator) and came up with some­thing entirely new, weird, and a completely different type of “music.” Anisa wants a new beginning with Sara so desperately she strikes a bargain she knows will cost her everything. The result is, of course, painful and not what she expected, but the horror of the story lies in what Anisa does at its end. A strange and a scary story from an author who keeps scaring the dickens out of me – and that is a very difficult thing to do.

T. Kingfisher‘s very short but touching “Pack­ing” is about making dire and limited choices as the world reshapes itself.

“And With Her Went the Spring” by Caroline Ratajski is the first of two originals in Nightmare. Girls disappear all too frequently, but this is not really the story of another girl whose description is broadcast on the local news, whose face is photo­copied onto poignant posters, whose family seeks answers even if the resolution they seek brings grief. Instead, Ratajski reminds us that Persephone was also a lost girl, and her absence brought winter to the world. The lost girl in this story is a young woman who, despite the ways of the world, persists. A strong story from a writer to watch.

Caspian Gray‘s “Promises of Spring” is some­thing of a prose sequel to a bad teen horror movie about some young people who mess with black magic. There are flashbacks to the scary stuff that occurred five years previously, but the brunt of the tale is about how Tay, the victim of the evil rituals, and Jason and Cody, two of the participants, decide to summon and destroy the witch who almost killed Tay. Then there’s a twist. Even though transgender­ism is part of the story, it is still a little too pat for my taste. Then again, it might make a decent low-budget flick.

Down Among the Sticks and Bones by Seanan McGuire is another Wayward Children novella, a prequel to the excellent Every Heart a Doorway. You needn’t read the first to appreciate this unsettling and thought-provoking standalone story (although you should read it anyway).

Mapping the Interior by Stephen Graham Jones is a powerful piece about family and loss and growing up and choices. It is literally haunting.

Okay, that’s it. I hope we are now experiencing a cool September and that no further illness has infested my life or yours. Guran out. [Mic drop.]