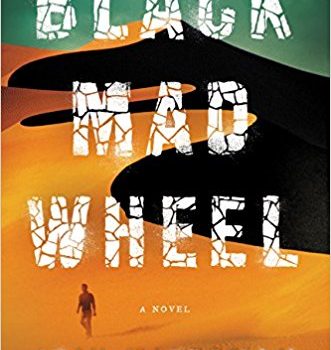 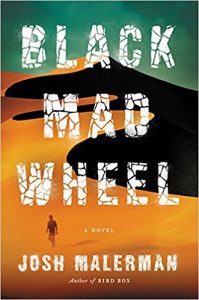 The alternating plotlines of Josh Malerman’s Black Mad Wheel both use the present tense and focus on a man named Philip Tonka. We first see him as a badly injured, yet not completely amnesiac patient in a midwestern hos­pital, someone who still “remembers every detail of the desert” where he was nearly pulverized, yet can’t explain what broke most of his bones. In a book where few chapters extend beyond ten pages (and many are shorter), the even-numbered ones look back a little way and set a context. In 1957 Detroit, Philip is the main force behind a four-man band that started out playing for troops in WWII but went on to become early rockers: performing in bars, having one hit song, struggling for new inspiration when the action starts, as an army man comes to Detroit with a tape he wants the band to hear – not a song, but a “sound.”

That’s where reality goes off the rails. Listen­ing to it play on a record studio speaker, Philip struggles with nausea and tries to describe what feels like “more of a flood than a reverberation,” or “something coming toward him…. As if the air it travels upon is scorched, rendered black, leaving a trail as wide as the studio, and maybe the entire city beyond the studio walls.” While platoons have failed to find the source, somewhere in Africa’s Namib Desert, the US military knows it’s strong enough to disable nuclear weapons. The fate of the world could depend on solving this mystery.

Back at the hospital, from the viewpoint of a nurse, we learn that Philip arrived “in an anoma­lous condition” (like most patients at Macy Mercy) but woke from a coma after six months. Now his lips and eyelids move. His skin’s mottled with bruises, an “endless spread of purple and orange, mud brown and yellow” caused by massive inter­nal breakage. Yet as nurse Ellen stares, he stares back… and all the fingertips of one hand twitch.

When Philip and his band The Danes accept the army’s offer, they travel to the Namib (“the world’s oldest desert”) with a military historian, a photographer, and a demoted general who’s legendary in army training camps: fierce, obses­sive, maybe crazy. Though the hospital scenes shift between the outlook of patient and nurse, they introduce another military fanatic, Dr. Szands. Almost as soon as Philip can respond to anything, he’s subjected to the doctor’s interroga­tion. Most of chapter nine’s four pages consist of rapid-fire Q&A (punctuated by the ringing of a bell), where one exchange – “You saw a ghost in the desert?”; “I saw a hundred ghosts in the desert” – is followed by implicit threat: “[T]he longer you play dumb, the longer I’ll have to simmer. And you don’t know me well enough to know where that might lead.” (Near mid-book, we see Szands in action.)

Despite the conjured shades of fighting men from many eras, and resonance with all warfare, this is a dark fable of the Cold War, where the great threat is nuclear. In the hospital, Philip proclaims himself “radioactive”; in the desert, the very word Nuclear enters his mind “foul-green and oozing, as though the syllables themselves are infected, toxic and capable of creating the terrifying vision of the mushroom cloud.” In a hidden place where his thoughts echo until they gain bizarre intensity, the musician’s professional ear finds both magnificence and horror: a jumble of hallucination and creation that might ultimately look beyond poisonous doom.

Pared to an eloquent minimum of text, driven by the force of shared fears, Black Mad Wheel gives faces (and voices) to the cycle of human history – at a crucial point where it just didn’t grind to a halt.