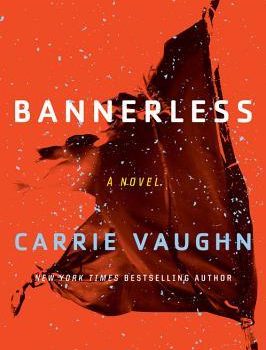 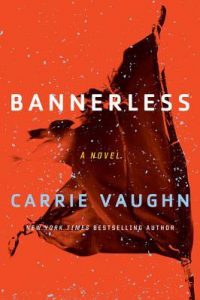 In Carrie Vaughn’s Bannerless, the world as we currently know it has fallen, thanks to environmental and economic calamities. Humanity nevertheless persists – thrives, really, given the circumstances. People along the Coast Road, a temperate zone subject to seasonal devastating storms, have learned to live in harmony with the world. They’ve agreed to live by a system of quotas for everything from grain production to resource consumption. In order to limit the drain on all they’ve worked to hold on to, couples must earn ‘‘banners’’ in order to reproduce.

It’s a system that seems agreeable to most. There are, however, always those folks who think the laws don’t apply specifically to them. Enter Enid, an investigator, whose job it is to settle disputes and uncover quota violations. She and her investigative partner Tomas are sent to a nearby community to decide if a death is suspicious. As you’d expect, the situation is more complicated than it first appears.

Vaughn has built an intriguing world in Bannerless (which is likely the first book in a series of mysteries that Enid will confront), one that feels just plausible enough to believe. The Fall, when it came, wasn’t an event, but more like a series of small catastrophes that took years to fully unfold. Pre-Fall humans managed to save birth control and solar panels – but lost cameras and latex gloves. ‘‘The consequences,’’ explains one character who can remember pre-fall life, were ‘‘too far ahead for them to think about.’’ Yes, the echoes to the here and now are intentional.

When it comes to plot and character, Vaughn is an experienced hand. Enid is an intriguing mix of curiosity, confidence, and, at times, blinding rage. This is her story – the chapters alternate between her present and past – and she’s pleasant to spend time with. Vaughn doesn’t simply paint the plot’s antagonists as villains; you can feel compassion for them as the story unfolds. There’s a lot of nuance here as well as solid, enviable craftsmanship.