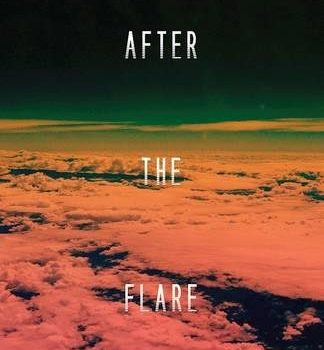 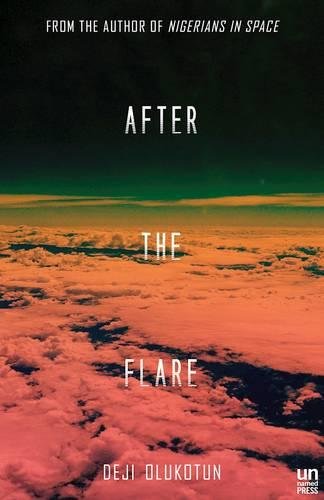 Despite its provocative title, Deji Bryce Olukotun’s first novel Nigerians in Space escaped my attention in 2014, but as it turns out, the Nigerians don’t actually get into space in that novel, which is mostly an international thriller centered around an effort to bring expatriate Nigerian brain power back to the home country (or the ‘‘brain gain,’’ as one character put it). It was apparently only tangentially SF, and I haven’t read it. However, despite carrying over a couple of the same characters and being listed as the second novel in a trilogy, there’s nothing tangential about After the Flare, which works perfectly well as standalone SF. Olukotun, an American attorney and activist whose connections to Africa seem to be largely through his Nigerian father and his MFA from South Africa, begins quite literally with the sort of bang that recalls Neal Stephenson’s blowing up the moon in the first sentence of his Seveneves: an enormous solar flare not only endangers the astronauts aboard the International Space Station, but – followed by a series of cyberattacks – wipes out virtually all the electrical grids and electromagnetic networks on most of the planet, leaving only a few nations near the equator with functioning infrastructures. A year later, it falls to the nascent Nigerian space program to mount a mission to save the one remaining survivor of the space station, a Ukrainian astronaut, before her supplies of air and food run out. The central character, Kwesi Bracket, is hired to engineer the giant water-filled simulation tank for the astronauts to train in before the mission can be completed. Not too surprisingly, he faces not only technical challenges, but posturing politicians and bureaucrats, shady industrialists, a clueless film crew making a propaganda piece about the project, and the danger of terrorist raids from Boko Haram and an equally violent fundamentalist group called the Jarumi.

That alone would seem to be the template for a solid near-future technothriller, with the rescue mission itself recalling elements of Andy Weir’s The Martian or the film Gravity, but Olukotun has a good deal more in mind. Bracket is given a strange artifact with unidentifiable markings, and a worker who steals the artifact promptly disappears in a puddle of blood. Sonic readings intended to measure the stability of the land beneath the launch site reveal the presence of something large and alive moving about underground, and Bracket himself barely survives when his trailer is attacked by an inhuman creature with what seems to be electrified skin. Even his biomechanical ‘‘geckofone’’ (there are also python phones and hummingbird phones) is attacked by a huge biomechanical spider seeking either to destroy it or retrieve its data. Meanwhile, in a second plot line, a group of tribal Wodaabe women, led by a young rape victim named Balewa, are waging their own insurgency against the Jarumi, which has kidnapped many of their children, using apparently magical ‘‘songstones’’ which can be used either as assault weapons or as a way of creating protective force fields. How those ancient, traditional songstones get incorporated into Olukotun’s SF plot is a bit convoluted, and Bracket needs to bring in a crusty old scientist from the first novel – Dr. Wole Olufunme, a kind of Nigerian Professor Challenger – in order to start drawing the threads together.

This is a lot to pack into a relatively short thriller, and it’s to Olukotun’s credit that he keeps the action moving at a rapid, almost non-stop pace, skillfully dropping in bits of slightly futuristic technology like those critter-phones, insect-sized ‘‘malflies’’ designed to disrupt computers, or web geeks called ‘‘newshounds,’’ so integrated with

their own newsfeeds that their speech is peppered with random bulletins unconnected to whatever they’re supposed to be talking about (I know a few people well on the way already). But by the time he introduces ancient astrolabes, meteorites that respond to music, and the notion that the Iron Age Nok culture of Nigeria – which disappeared some 1,500 years ago – might still be around, and with an advanced technology to boot, he risks moving into Indiana Jones or even Dan Brown territory – which can seem a bit jarring in a future in which real horrors like Boko Haram are still plaguing Nigeria. As much fun as these alarms and divagations might be on their own terms, by the time we finally get around to launching the rescue mission, which finally does involve Nigerians in space, it almost seems an anticlimax. Olukotun shows a flair for both kinetic pacing and credible SF speculation, though, and now that he’s broken the tether into pure SF, it will be very interesting to see where the third novel in the trilogy takes us. 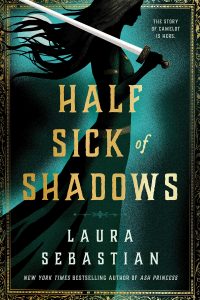