August 2017—
Issue 220
• This issue has fiction by Rod Clark, Lou Antonelli, Ray Prew, Charlie Fish, Gregory Cioffi, and others.
• There’s also flash fiction, poetry, and an editorial, plus links to more of the best stories and poetry from the ‘zine’s first 20 years. 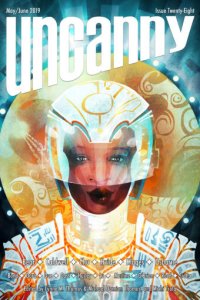 I’m reading another book right now that has a self-aware AI emerging from The Internet or other complex computer system. It seems like I’ve read quite a few novels and stories using this trope over the last few years. Probably the most recently prominent would be Robert J. Sawyer’s WWW trilogy, of which the first, Wake, was nominated for a Hugo in 2010. I have to say, I’m pretty skeptical