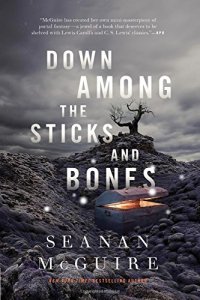 I had mixed feelings about Seanan McGuire’s Every Heart A Doorway, the first work of McGuire’s Wayward Children series. It made me feel uncomfortably as though I were being asked to agree with a protagonist who, subject to conditioning and what seems like child abuse from multiple directions, chooses to return to a world where she had come to enjoy self-denial, stillness, and starvation, and agree that this was a good option. Despite the vivid characterisation, quirky world building, and excellent pacing in Every Heart A Doorway, my reading of its un­derlying thematic arguments disturbed my ability to view it with any great charity.

Down Among the Sticks and Bones is a prequel of sorts, a standalone short novel which essentially presents the origin story of the twins Jack and Jill – Jacqueline and Jillian – who played such a large role in Every Heart A Doorway. This is the story of their childhood, born to con­trolling parents who had fixed ideas of what they were supposed to be, and of their discovery of the doorway to another world, the Moors, where they are offered a choice between the guardianship of a vampire and that of a mad scientist, in a dangerous world full of magic and blood.

Jillian was raised to be a tomboy, to play sports and not be afraid of getting dirty: everyone in­sisted that she was brave and smart. Jacqueline was raised to be the perfect princess, to wear frilly dresses and sit quietly. No one expected her to be brave, or to be intelligent. Until they were five, their grandmother provided them with the care and affection and belief in their own possi­bilities that their parents did not – but when they were five, their parents sent their grandmother away. She was gone when they woke up, and they learned that adults were fundamentally not to be trusted.

At age 12, they discover a door to a secret country, a magic land. In the Moors, Jack chooses to become apprentice to a mad scientist over remaining in the castle of the vampire who rules the neighbouring village. Jill, on the other hand, chooses the vampire.

Their paths separate, Jill in remote and arrogant loneliness, choosing the path of monstrousness, becoming the princess that her vampire-guardian is raising her to be; Jack learning the mad science trade, but also having friends and relationships in the village, and falling in love with a village girl. Neither of them wish to return to their previous lives, but neither can be sure of staying in the Moors for good until after the age of 18 (be­cause that is how the magic works). When Jill, consumed by selfishness and jealousy and want­ing her sister to choose her, commits an act that causes her to forfeit the protection of her vampire lord and also causes the villagers to want her dead, Jack chooses to save her – and chooses to return both of them to their original world, at least for a time, rather than let her sister die.

Down Among the Sticks and Bones has the voice and rhythm of a fairy tale, appropriately enough. It is vividly characterised, as so much of Seanan McGuire’s work is, and has the kind of prose that carries you along to find out what happens next. Its thematic concerns – in family, in autonomy, in choices, and in the nature of monsters – are interesting, although I’m not at all convinced that they come together in a coher­ent argument.

It’s an entertaining book. I’m not so sure I enjoyed it as a narrative, but I definitely enjoyed its characters. 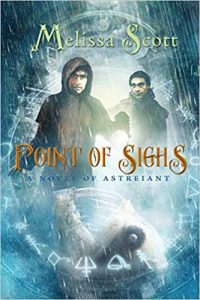 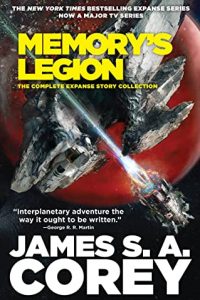