A Conjuring of Light (book three in the Shades of Magic trilogy) by V.E. Schwab barely edged out Neil Gaiman’s Norse Mythology to capture the top spot on our hardcover list. The new runner-up was The Black Wolves of Boston by Wen Spencer (Baen). There were 56 nominated titles, the same as last month.

Patricia Brigg’s Fire Touched (book nine in the Mercy Thompson series) took the top spot on the paperback list, followed by old favorite The Name of the Wind by Patrick Rothfuss (book one in the Kingkiller Chronicle series). The new runner-up was Stephen King’s Night Shift. There were 57 nominated titles, up from 54 last month.

Returning to the top spot on the trade paperback list was Stories of Your Life and Others by Ted Chiang, with Cixin Liu’s The Three-Body Problem a close second. There were no new runners-up. We had 65 nominated titles, down from 69 last month.

Star Wars novels captured the top two places in our media-related and gaming-related list with Star Wars: Bloodline by Claudia Gray taking first place from Chuck Wendig’s Star Wars: Aftermath: Empire’s End by a very close margin. There were no new runners-up; 22 titles were nominated, down from 30 last month.

From the May 2017 issue of Locus Magazine 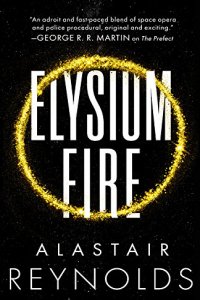