Levy was a noted expert on children’s, YA, and SF/F literature. He was an editor for Extrapolation starting in 2006 and reviewed extensively, including for Publishers Weekly, The New York Review of Science Fiction, and other publications. He was an active member of the International Association for the Fantastic in the Arts and the Science Fiction Research Association, and was an editorial board member of The Journal of the Fantastic in the Arts from 2010 onward. With Farah Mendlesohn he co-wrote Children’s Fantasy Literature: An Introduction (2016). He also wrote non-fiction books Natalie Babbitt (1991) and Portrayal of South East Asian Refugees in Recent American Children’s Books (2000), drew maps for fantasies by P.C. Hodgell, and published at least one short story, “Death of a Unicorn” (1975).

Michael M. Levy was born April 15, 1950 in Chicago IL. He attended the University of Illinois for his BA (1972), Ohio State University for his MA (1974), and the University of Minnesota for his PhD (1982). He began teaching English literature at the University of Wisconsin Stout in 1980, where he remained for his entire career. Levy is survived by his wife, poet Sandra J. Lindow, and their two children. 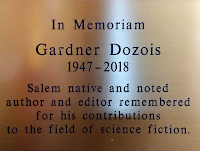