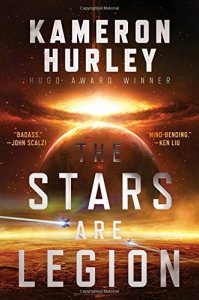 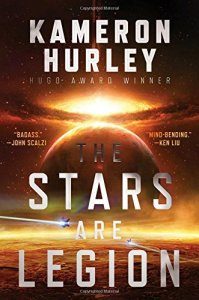 Kameron Hurley’s first full-bore venture into SF is described by both the author and the publisher as space opera, but it’s about the most claustrophobic space opera we’re likely to see. In place of the galaxy-wide canvases of the classic form, she takes us to a rather sad cluster of decaying artificial worldlets, called the Legion, grouped around an artificial sun and so near to each other that they can be visited on what amounts to outer space jet skis. Furthermore, one of her two main characters spends more than half the novel struggling through a terrifying underground journey inside one of the worldlets, a journey which provides the novel with its most power­ful and visceral images, drawn more from the intestinal school of body horror than from any tradition of technological SF. Every liquid in the book – even the rain – is viscous, every tentacle is slimy or ropy (and even the ground has tentacles), every hill seems to be made of bones or corpses. There’s a wonderfully ba­roque nightmare called the recycler monster, described in terms that recall nothing so much as Goya’s ‘‘Saturn Devouring His Son’’ and that makes the Star Wars garbage monster seem almost cuddly. Even the weapons use cephalopods for ammunition. In other words, while the raw template may be space opera, The Stars Are Legion draws enthusiastically and effectively on a number of mythological and horror traditions as well.

Hurley begins with a classic opening gambit: the narrator who awakens with only fragments of memory. Zan, as she eventually learns from her ally and sometime lover Jayd, is a skilled military leader for the Katazyrna family, which is fighting the rival Bhavaja family for control of the worlds in the Legion. Zan is the only one who has been able to penetrate the rogue world called Mokshi, which is thought to hide secrets that may permit escape from the crowded Core of worlds, and perhaps holds a key to defeating the Bhavajas. But each time she makes it inside, any troops with her are destroyed or repelled, and Zan herself always loses her memory. Her latest attempt is undermined by a sneak attack from the Bhavajas. Jayd, whose mother is the Lord Katazyrna, is captured and sent off to marry the Bhavaja leader Rasida, who orders Zan tossed down the recycle bin to what seems is certain doom (that bit, at least, is classic pulp space opera).

The rest of the narrative is mostly divided between Jayd’s shrewd political machinations among the treacherous Bhavajas and Zan’s quest for survival through all those underworld monstrosities. Pretty clearly, Jayd has the better deal, though Zan does find some unlikely allies, including a woman named Das Muni, whose own world has died; Casamir, who describes herself as an engineer (we later learn what that actually means); and Andamis, who leads them into a vast underground city called Amaris, where no one gives a hoot about the surface war between the Katazyrnas and the Bhavajas. We learn more interesting things about this underworld from a pregnant woman named Arankadash (there are no male characters at all, and wombs are clearly seen as valued commodi­ties), whose people give birth not to children, but to ‘‘things the world needs’’ – rather like in Geoff Ryman’s ‘‘The Unconquered Country’’, I suspect. These secondary characters lend a kind of epic complexity to Zan’s tale that Jayd’s more conventional political intrigue can’t match, no matter how duplicitous or cruel the players turn out to be. When the two principals finally reunite, though, The Stars Are Legion finally delivers powerfully – if disturbingly – on that space opera promise. 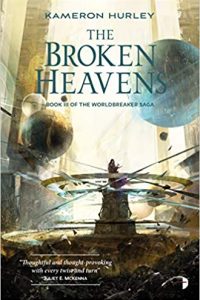 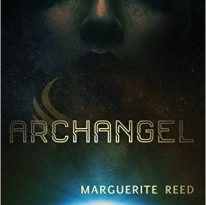