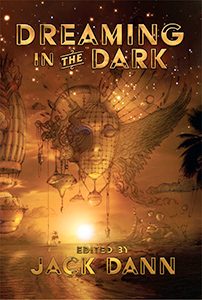 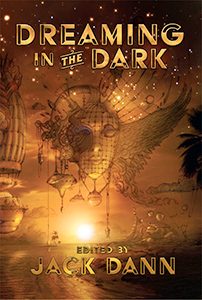 ‘‘What’s this business about Australia’s Golden Age?’’ Jack Dann asks in his introduction to Dreaming in the Dark. ‘‘Are we in a Golden Age? Well, I think we are.’’

Dreaming in the Dark is an anthology of Australian science fiction, fantasy, and horror, collecting stories by authors such as Sean Williams, Angela Slatter, and Garth Nix. This isn’t Dann’s first collection of Australian SF&F, and this volume may be read as a sequel to earlier volumes, Dreaming Down-Under and Dreaming Again. ‘‘My agenda for this book,’’ he writes, ‘‘is to show off the diamond sharp results of this period… the mature, outreaching, beautiful, galling, nerve-cracking, edgy, humorous (we’re known for not taking ourselves that seriously all the time!), elegiac, finely-wrought, slap-in-the-face, unnerving, poignant, brilliantly bright and ebon dark work that Australian fabulists are doing right now.’’

Dann’s choices emphasize impressive prose, sometimes precise and measured, sometimes absurdist, sometimes poetic. Perhaps the most scintillating example is ‘‘The Liquid Palace’’ by Adam Browne, a jarring and sometimes perplexing piece about a space explorer traveling the depths of an alien ocean in a giant, hollowed eyeball. One of the most striking passages:

All architecture partakes of rhythm.
Further: this rhythm is retained even if that architecture should liquefy.
Think of the wintry planet Balsamine, the moveless waves of its quick-frozen seas, every roil and dimple retained in the bluegreen freeze, where local nomads make temporary settlements among surf that stands grander than citadels. And think of the periodic thaws that come to those seas, the waves resuming their motions, but with the same measures, the same ornaments. So is architecture frozen flow.

The story is told in a freewheeling, bizarre style, incorporating elements of old travelogues. It teeters on a compelling edge between ridiculous and poetic, managing both.

James Bradley’s ‘‘Martian Triptych’’, also told in lovely prose, is comprised of vignettes by three different narrators with intimate connections to Mars. This is another example of the anthology’s poetic strengths, as the story relies on resonances and off-page moments to create its plot and emotional connection.

The anthology features a number of contemporary fantasy pieces where ordinary people experience a brush with the fantastical or horrifying. For me, the best of these was Venero Armanno’s ‘‘Heat Treatment’’, wherein a father has to cope with unrelenting, intrusive worries that he might hurt his own infant. The story is as claustrophobic and intense as the recurrent images themselves. The feverish language, at extreme moments, lapses into literal poetry.

On the other hand, ‘‘A Right Pretty Mate’’ by Lisa L. Hannett is a charming coming-of-age fantasy which spotlights character and plot instead of language. The story is more light-hearted than most of the anthology. It’s an adventure about a non-masculine boy who lives on an island where men marry literal harpies. As one might expect, the story considers gender and sexuality.

While almost all the stories in this anthology were strong individually, their integration as a whole was less successful. Several of the contemporary stories combined similar moods and approaches, and even a little repetition in a short space like an anthology can feel disproportionately heavy.

Dreaming in the Dark will especially appeal to two groups of readers – those who love words themselves, and those who want an enticing sampler of work by some of Australia’s most talented working writers. As Dann points out in his introduction, ‘‘this is just a taster.’’