Most writers quit. Many aspiring writers get angry when I say discouraging things like this, but sometimes the truth is discouraging. Most writers quit because they achieve what they set out to do – publish a book, or a short story, or simply finish one – and realize they are staring at the same blank, purposeless future that they started with.

Certainly, I have also seen many quit after going to intensive writing workshops, when they realized they didn’t want to be career writers. They saw the future ahead and realized it wasn’t for them. Quitting is natural and normal, as with any other craft, career, or hobby. So is realizing one wants to be a hobbyist writer and not a career writer. Plenty of hobbyist writers are masters of their craft.

Then there are those who quit after selling their first novel, or two novels, or six. These shifts mid-career always interest me most, because I’m at the point in my own career where I understand the urge to quit, even after experiencing some success, in a way I could not have comprehended as an unpublished writer – and that has left me here, having books published and paid for, and staring ahead into a grinding future of deadlines and release dates, working toward a breakout book.

The realization that writing is an art but publishing is a business can be demoralizing. Staring into a future much like the present can give one vertigo. Self-publishing is no easier, as you will find yourself mucking about in covers and copyediting and distribution and marketing for more hours than you spend writing – and when you publish traditionally you find yourself losing a lot of control over your work timelines and visions for the book’s marketing. Once you begin publishing, you realize that the writing itself is the easiest part of the business, and you long for the days when all you did was write, when you had a passion and a purpose.

My personal writing goal as a teen, the one that drove me through the publication of my first handful of novels, was that I wanted to make a living wage as a novelist. I wanted success represented by financial freedom. But when I finally achieved that in 2015, it wasn’t at all what I thought it would be. Making a living wage as a writer one year doesn’t guarantee you’ll make a living wage the next. I thought the money itself would provide the passion to keep going, but I have a day job that pays the mortgage, and the truth was that the novel writing money went toward paying traveling expenses and student loan debt and veterinary bills. I didn’t need it to pay for health insurance and bread.

I had achieved what I set out to do as a teen, and found myself staring at that long future of punishing deadlines and hustling to earn out advances, and I found that it wasn’t enough.

So what drives me now?

I just finished reading Cal Newport’s book, So Good They Can’t Ignore You, which argues that some of the world’s most happy and successful people choose careers which are driven by a personal mission. These missions don’t spring full-formed from their brains at age 20 or 30. Instead, they are missions that they explore, define, and refine in the first decade or two of their careers. They come back to their missions when they feel they have achieved a significant goal or milestone, and adjust it as necessary. It is this mission, then, that drives them forward when the grind gets them down.

As human beings, we need to believe that our lives have meaning. Many find this in religion, but religion does not always satisfy the need for a personal mission. What drives us when we despair? More often than not, it is our personal mission. And if we don’t have one, it can be easy to get stuck in a rut and lose focus and purpose.

I recognized this mission-formulation as part of a process I’ve undergone in my own career the last couple of years. I needed to figure out what came next after I published some books and made some money. After some soul-searching, I found that my mission is as ambitious as they come: I want to change the world.

This mission isn’t as outlandish as it may seem, as the fan mail my work has generated can be humbling. Most writers have these sorts of stories about how their work helped a fan through a tough time. I’ve had e-mails from people who found the strength to leave a relationship, to come out to their parents, to move across the country, to apply for a dream job, to create their own edgy and incomparable work, after reading mine. As a creator, an artist, a wordsmith, this is what I live for. I stick to the idea that my fiction should show people new worlds and ways of being. They should, in the words of Joanna Russ, show people how things could be ‘‘really different.’’

I take storytelling seriously because I understand that storytelling is how we make sense of the world. If we cannot imagine a thing, it’s incredibly difficult to make it a reality. My job is to help people imagine a different world. Stretching the limits of our imaginations is the only way for us to push toward the impossible. As we have seen time and again, what we once thought to be impossible can easily become probable and then practical once we unleash ourselves from the prison of our own narrow thinking, and novels can help us do that. I write novels that help us dream big. Not only about technology and how it could transform us, but about how we organize ourselves, how we perceive our sense of self, how we understand government and justice. What makes us truly human? If we pick ourselves up and put ourselves into another time and place, changing everything about our history and our environment, who would we be? Would we recognize ourselves?

There is a theory that human consciousness begins with story. It is, quite literally, how we build the world. What we dream, we create. What we imagine, we make truth. It is how we can share the same world with billions of people and thousands of other cultures and yet all see this world and our place in it so differently. Story is also how we can begin to change our own view of the world. As Ursula Le Guin said in her National Book Award speech:

We live in capitalism. Its power seems inescapable. So did the divine right of kings. Any human power can be resisted and changed by human beings. Resistance and change often begin in art, and very often in our art – the art of words.

Resistance begins in art. That is the sort of art I want to make. It’s this idea, that we can inspire change by imagining a different world – with different ideas about gender, religion, art, government, technology, personhood, war, peace, living, dying – as possible and real that drives me.

What drives your career? 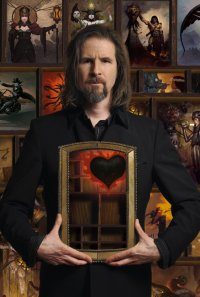