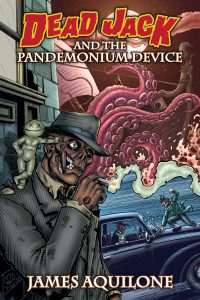 The odds are against you. Most Kickstarter projects fail, and the publishing category is near the top of that list, with nearly 70 percent of campaigns not reaching their funding goals. Unsurprisingly first-time novelists have it the toughest. There are a ton of articles detailing why it’s a terrible idea for newbies to launch a Kickstarter. Had I read any of them before I launched my campaign, I may have listened to the naysayers. They make a great case against crowdfunding. After all, you have no following, no track record, and no idea what you’re facing. Yet plenty of first-timers succeed on Kickstarter and other platforms. Against the odds, I funded my project, Dead Jack and the Pandemonium Device, in three days and tripled my goal in three weeks.

Social media has been my bread and butter. You can’t count on traditional, paid ads to spread the word. I ran several Facebook and Twitter ads and saw absolutely nothing from them but a dent in my wallet. I landed half of my backers through posts on Facebook pages and groups. The key? Make it interesting and mix it up. Post the cover, the video, the Kickstarter image, excerpts, artwork, etc., and also remember to include the short link with every post. (You can track the clicks on Bitly.) And don’t be afraid to push the limit. Post just past the point of where it feels spammy. You need to reach thousands of people just to get a few clicks, so prepare to become a posting machine.

For a first-time novelist, a high-concept novel is an easier sell. You don’t have much time to win over a backer, so a book that can be quickly pitched with an engaging premise is going to help. Popular sub-genres with rabid, in-built audiences help too—zombies, vampires, space opera, epic fantasy, etc. My book, Dead Jack and the Pandemonium Device, follows the exploits of a zombie detective and his homunculus frenemy.

A writing sample is paramount. Who’s going to buy a book from an author whose work they’ve never read? It seems obvious, but after compiling SF Signal’s Crowdfunding Roundup for four years, I saw many writing campaigns that didn’t include an excerpt. That’s asking a lot from potential backers. If your excerpt is amazing, it won’t matter that it’s your first novel. It’s just a matter of getting it in front of as many eyeballs as possible. I posted the first chapter of my book on my website, as a note on Facebook, and on guest blogs. You can even post it directly on your campaign page or as an update.

And if you have any short stories published online, link to them as I did.

Don’t judge a book by its cover? Yeah, right. My campaign has succeeded, in large part, because of the amazing artwork by Ed Watson. Good art not only draws in readers—it makes your campaign page look professional. I didn’t stop with a cover, though. I included sketches of my characters and a map, and even incorporated the artwork in the headers. The more art the better.

Kickstarter allows people to view your campaign before it launches, and it’s a good idea to get as many people—especially those who’ve run successful campaigns—to check it out. I avoided a bunch of newbie mistakes because of advice I got from friends who looked over my pre-launch campaign.

I went a different way with my video. Instead of prattling on about the book in an iPhone video, I let my characters do the talking. Using text and artwork, I put together a 95-second clip (with the ProShow Gold program) that introduced my characters and gave a brief synopsis of the book.

The experts say the video is important, but I’ve seen fiction campaigns succeed without one. If you do a video, keep it short, make it fun, and feature your artwork.

Kickstarter is an all-or-nothing situation. If you don’t make the goal, you walk away with nada. Sure, it can be expensive to publish a book, but you don’t need to reach profitability through your project. You can use it to offset your costs. Think of it this way—if you don’t Kickstart the book, you still have to come up with all the costs on your own. Why not make $500 to $1000 to help you along before your book is released? Traditionally published books take months or years to make a profit. Sometimes they never do. That’s the risk you take. I set my goal at $1000, which would have made the campaign profitable, but I had my eye set on a higher total. I’m nearing it now and I didn’t have to spend weeks worrying about whether I’d make my goal.

Look at the campaign as an extension of your book. From the video to the blurb to the rewards, make it unique, engaging, and entertaining. As a first-timer, you’ll have to work a little harder to land backers and attention. I have a $1 reward level, where I promise to buy a donut with the money and put the backers name in the book. It’s been a popular reward with a number of people commenting on it and having fun with it. And of course I get donuts, which is always a win!

Of course, crowdfunding your first novel isn’t always a good idea and what worked for me won’t necessarily work for you. Either way, research, plan, and work hard. And good luck!

James Aquilone is a writer and editor from Staten Island, New York. His short fiction has been published in such places as Nature’s Futures, The Best of Galaxy’s Edge 2013-2014, Unidentified Funny Objects 4, and Weird Tales Magazine. He Kickstarted his first novel, Dead Jack and the Pandemonium Device, against his better judgement.

One thought on “James Aquilone Guest Post–“Kickstarter: How to Fund Your First Novel in 3 Days””