May 2016—
• Stories posted in May are by Robert Reed, Jay Lake and Ruth Nestvold, Craig Lincoln, A. Merc Rustad, and others.

May 2016—
• Stories posted so far in May are Tegan Moore’s How High Your Gods Can Count, Sarah Pinsker’s Left the Century to Sit Unmoved, and J.D. Moyer’s The Beef.
• Columns and articles include Vajra Chandrasekera on two SF novels about Aztecs, Gillian Polack’s letter to Tiptree, and Andrea Phillips on moral ambiguity.
• There’s also poetry and reviews.

May 2016—
• Original stories posted in May are by Theodora Goss, Brit Mandelo, P. Djeli Clark, and Dennis Danvers.
• Excerpts are from works by Tim Lebbon, Ian Cameron Esslemont, Kameron Hurley, and others. 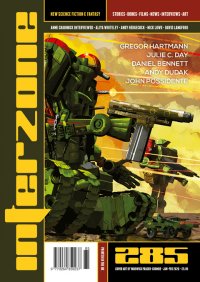 Dragon Con 2018 was held August 30 – September 3, 2018 across five hotels in downtown Atlanta GA. There were roughly 80,0000 attendees, about the same as the 2017 event. Steven Barnes was the literary guest of honor, and Brom was the art show guest of honor. The scores of guests included numerous actors from genre films and television, screenwriters, video game creators, editors, and writers. SF writers on programming