This ambitious, epic historical fantasy novel of light and dark angels meddling in human affairs during the Hundred Years War finally receives a US edition after appearing in the UK in 2014. ‘‘Alder turns standard notions of fantasy and history, human and supernatural motivations, Nature and a structured Cosmos, on their heads, writing beautifully and at a pace undaunted by the twists and turns of a wild plot.’’ [Faren Miller]

Weighing in at nearly 600 pages, this immense retrospective provides 40 stories (five original) from the 30-year career of one of our best writers of unsettling dark fiction, with introduc­tions to many stories from luminaries including Ramsey Campbell, Mort Castle, and Elizabeth Massie. ‘‘A long overdue omnibus…. Winner of multiple Bram Stoker Awards and student of the best 1970s and ’80s horror traditions, Braunbeck hybridizes the supernatural themes and narrative slickness of Stephen King and marries them to Jack Ketchum’s soulful tales of human frailty.’’ [Stefan Dziemianowicz]

This long-awaited return to the Vorkosigan Saga (the first since 2010’s Cryoburn) focuses on Miles Vorkosigan’s mother Cordelia, who is spinning new plots following the death of her husband three years earlier… plots that will entangle both Admiral Oliver Jole and Miles himself.

The latest in the annual anthology includes 28 of the best stories from 2014, with work by some of the most accomplished writ­ers in the genres, including Laird Barron, Elizabeth Bear, Gemma Files, Caitlín R. Kiernan, Yoon Ha Lee, and Jeff VanderMeer. Includes an introduction by the editor.

The third volume in this eclectic and enjoy­able original anthology series features four stories: ‘‘Goddess at the Crossroads’’ by Kevin Hearne, ‘‘Ashes’’ by Laura Bickle, ‘‘The Death of Aiguil­lon’’ by Aliette de Bodard, and ‘‘One Hundred Ablutions’’ by Jacqueline Carey.

R. A. Lafferty, The Man Underneath: The Collected Short Fiction Volume Three
(Centipede Press May 2016)

The third volume in this ambitious series to collect the visionary author’s short fiction includes 19 stories from the ’60s, ’70s, and ’80s including the classic ‘‘Nine Hundred Grandmothers’’, along with an erudite and lively introduction by the late Bud Webster, and an afterword by series editor John Pelan.

This fantasy novella set in Jazz Age New York engages with and critiques H.P. Lovecraft’s famous (and famously xenophobic) story ‘‘The Horror at Red Hook’’… and has fun doing it. ‘‘LaValle’s ingenious project involves co-opting Lovecraft’s epic-scale paranoia into the service of a trickster tale… It’s not necessary to have read ‘The Horror at Red Hook’ to enjoy LaValle’s re-imagining, but it certainly adds a mordant irony to the tale.’’ [Gary K. Wolfe]

This anthology features 24 Lovecraftian stories (and one poem) about women, written by women, with authors including Gemma Files, Molly Tanzer, Mary A. Turzillo, Benjanun Sriduangkaew, and more; the editors explain ‘‘the first spark was the notion, among some fans of the Lovecraft Mythos, that women do not like to write in this category, and that they can’t write in this category.’’

Offutt caused a stir in genre circles last year with his New York Times Magazine article ‘‘My Dad, the Pornographer’’, revealing that his late father, SF writer Andrew J. Offutt (died 2013), had secretly published hundreds of pornographic novels under nearly a score of pseudonyms. Now the younger Offutt has expanded that story into a moving and clear-eyed memoir about his child­hood and his complex relationship with his father.

The reign­ing master of ‘‘secret history,’’ adept at weaving historical fact with fantastic speculation, turns his attention to Hollywood in the 1920s (and the modern day) in this tale of a decaying mansion that allows its denizens access to the past and future. ‘‘As always with his complicated plots, Powers manages to pull all the strings together in a satisfying way.’’ [Gary K. Wolfe]

This historical fantasy set during the 1950s Jim Crow era in the US (with occasional forays to other worlds) revolves around the young, black, weird-fiction-loving Korean War vet Atticus Turner and his family and community in Chicago as they come into repeated conflict with the Order of the Ancient Dawn, a vicious secret society of sorcerers. It’s ‘‘often harrowing, yes, but it’s also a testament to the power of family, community, ingenuity, and love to overcome (or at least cope with) unendurable horrors. It might be my favorite Matt Ruff novel yet, and that’s saying something.’’ [Tim Pratt]

This ambitious and sprawl­ing novel takes the form of a series a letters from Waldy Tolliver (who believes himself trapped in a bubble outside of time) to his former lover, exploring Waldy’s family history from turn-of-the-century Vienna through Nazi death camps and the Golden Age of science fiction. A ‘‘substantial, genre-busting novel.’’ [Faren Miller] 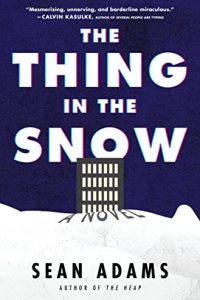